In the weeks since news broke that the Trump administration was tearing children from their parents, President Trump’s polling numbers have held steady. Even when asked about his handling of immigration policy, in particular, no shift has been detected. This reflects a disturbing truth about both our nation and present moment—there are two distinct Americas: One rightfully sees this cruel and deliberate abuse of migrant children as a moral abomination, while the other has so deeply swallowed our President’s dehumanizing rhetoric that they are nonplussed—or even cheer—when migrants’ human rights are violated. On my recent to McAllen, TX with a delegation of clergy from Faith in Public Life, I was struck by how starkly this split bifurcated the community. Over three days, we witnessed both our federal government’s inhumanity and the radical faith of those toiling on the front lines to mitigate its abuses.

In the center of McAllen sits Catholic Charities of the Rio Grande Valley (CCRGV). Though it’s housed in a small, one-floor stucco building run by a skeleton crew of nuns and volunteers, the enormity of its ministry dwarfs its modest footprint. Every day, hundreds of asylum seekers are released from nearby federal detention centers and walk to CCRGV; they are often ill-fed, haven’t showered in days, and sometimes require medical attention. The center ensures they are able to bathe, eat a full meal, see a doctor and receive fresh clothes before they travel to their next destination. More than simply caring for migrants’ physical needs, however, the staff take special care to ensure that the people who pass through feel welcome and loved.

Sister Norma Pimental has run the center for years, creating a space of refuge and respite amidst federal inhospitality. Though her demeanor can seem gruff, this brusqueness belies deep compassion.

“What we do initially when [migrants] arrive is to welcome them, to show that we care for them,” she said, “We acknowledge their pain and suffering, and we tell them they are not alone.” This may seem paltry comfort to people who have endured so much trauma, but set against the cruelty of detention, the relief it engenders is palpable.

The refugees I spoke with described detention facilities as freezing cold—both literally and figuratively. Migrant families are split up, divided into separate cages for men, women, and children. They are typically given only a single bologna sandwich every 24 hours, and are offered only a light aluminum foil blanket to shield them from the industrial air conditioning’s bitter chill. After spending days or weeks in such conditions, the contrast with CCRGV’s enthusiastic welcome is overwhelming. As streams of refugees approach the building, Sister Norma and her team emerge clapping, shouting “¡Bienvenidos!” For many, it’s the first time someone in the United States has told them they are welcome.

Sister Norma is unambiguous, however, in describing how current federal policy adds misery to the lives of many who have already suffered unimaginable violence in their home countries. “We must be one voice,” she said, “to stand up and say, ‘It is not okay for us to create more pain for families and children that have already been through so much.’”

In nearby Brownsville, the federal immigration courthouse looms large over a public park. Inside—in trials shorter than a sitcom—migrants are often sentenced to months or even years in federal detention centers for attempting to enter the United States, despite the dire, pressing circumstances many cite as their reason for doing so. In the shadow of this immorality, we gathered with hundreds at a protest organized by the ACLU—demanding our government reunite the families it tore apart, and cease criminalizing those who seek asylum. At the rally, many local activists spoke about the devastation that deliberately cruel policy is wreaking in immigrant communities. Perhaps no speech was as moving, however, as that of Ricardo—a 9-year-old boy who took the microphone to plead for humane immigration laws. “I am afraid my grandpa will be deported and I will never see him again,” he admitted, voice quivering, “Every night I pray that he will not be taken.”

Indeed, an air of potent fear and trauma hung thickly over many of our conversations with local organizers and activists. Abraham, an organizer with La Unión del Pueblo Entero (LUPE) described how, as they separated children, “Whenever the bus passed by, you’d see children banging on the windows, putting their hands on the windows.” Tania Chavez, another LUPE organizer, lamented how “under no other administration have we seen so many deaths from Border Patrol and ICE,” both from agents who have shot unarmed migrants, as well as the many who “have died in the desert and crossing the border wall because of policies that are pushing immigrants to cross through more dangerous pathways.” These are the kinds of tragedies that ought to shock a community and country to its senses, and yet many in McAllen and our nation at large seem unmoved.

A moral nation should be appalled by such senseless violence, and yet we seem to have entered an era in which millions freely countenance the unconscionable. It seems undeniable that this is, in large part, linked to how President Trump despicably paints refugees as drug dealers, rapists and murderers. To counter this vicious xenophobia, we must follow the example of activists at the border: We must radically expand our solidarity with migrants, reject our immoral immigration paradigm, and proclaim a different vision for how we treat our neighbors. “As human beings we must acknowledge the dignity of life,” Chavez said, “We must acknowledge that every single human being must be respected.”

This may sound banal, but with a government that openly declares some people as unworthy of love, respect—even due process—simple love is radical. It is painfully clear, our country is perched on a precipice. If the Trump administration is permitted to face negligible consequences for kidnapping thousands of children, even darker days lie ahead. People who are willing to support tearing migrant children from their parents’ arms have shown their willingness to support just about any amoral behavior. We must be unequivocal in our response. It’s time to build a coalition of the willing and draw a line firmly in the sand, crying, “We will not be moved.” 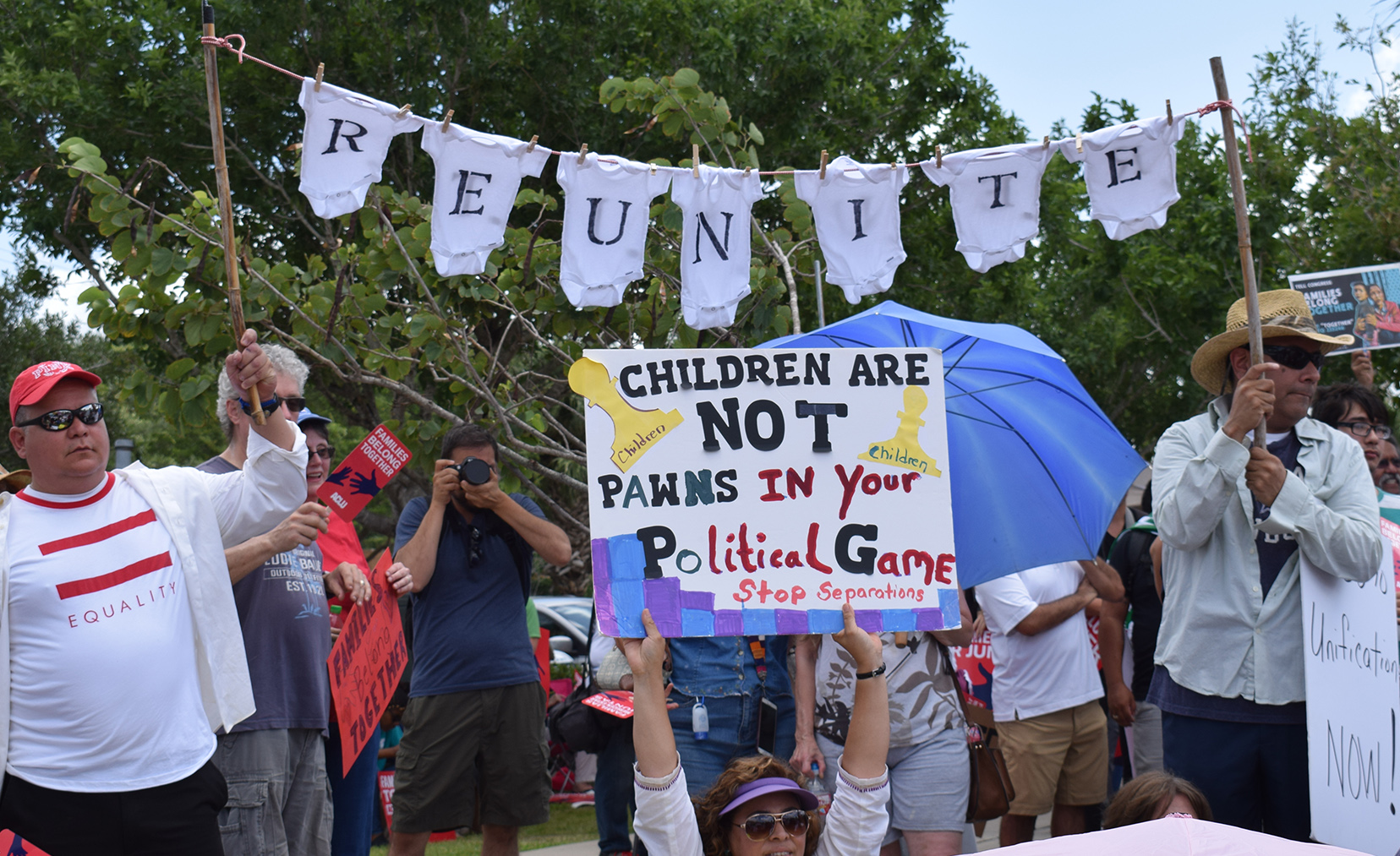 This crisis will not be over until every child is reunited with their parents. It will not be over until we adopt moral immigration policy that recognizes migration as a central part of all humans’ lives. And we must do so squarely in the name of our most sacred values: The Bible was written by migrants, the Qur’an as well. Buddha migrated frequently, dependent on the kindness of strangers, as did Abraham, Moses, Joseph Smith, Jesus and countless spiritual forbearers. There is a reason why commandments to welcome strangers are found in almost every holy text and religious tradition: Caring for those on the margins is at the heart of the work to which God calls us.

When our government tears apart families— then offers a “solution” that simply cages refugees together and neither makes provision for reuniting shattered families nor tending the trauma they caused—we are faced with a choice: Will we simply look on as our country spirals further into darkness, or do we have the moral fortitude to stand with migrants? Rising fascism always starts by targeting the most vulnerable, those Jesus named “the least of these.” The only righteous recourse is to defend a vision of a world without border wounds, and drive that evil back with radically inclusive love.