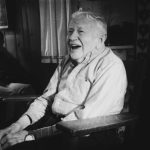 Technically I’m retired, but am nearing the close of several years’ research for my book entitled Claiming Different Forms of the Good News: Road to a Larger Gospel; Overlooked Bible Foundations for Growing in the Faith. (I would be pleased to hear of any faculty member or other person associated with Union who is interested in this subject. I would also welcome suggestions for an appropriate publisher.) I just realized that this year marks the 75th anniversary of my graduation from Union. I would be interested to know if there are other members of the Class of ’41 still living. [editor’s note: Mr. Jaggard is one of five surviving members of the Class of 1941.] On November 25, 2015, I reached my 100th birthday. I was glad to have my beloved wife of 72 ½ years, Jean Dale McGiffert Jaggard, celebrate with me. Only a month later, at the age of 95 ½, she took her farewell for now. (Arthur Cushman McGiffert, president of Union a little before my days there, was part of her extended family.)

What’s the best thing about your job?
I’ve been retired for twenty-five years, but, prior to retirement, I pursued active ministries of half a dozen different types until age 75, including pastoral, preaching, social ministry, academic, college Bible teaching, Army Reserve Chaplaincy, and two short-term, month-long team ministries to Novosibirsk, Siberia.

How did Union prepare you for this?
Prior to my time at Union, I did work under Karl Barth in Basel, Switzerland (just before World War II). My time at Union Theological Seminary followed where I heard “Reinie” Niebuhr with his sparkling insights into the ethical decisions we make as Christians. More difficult to grasp as a whole, for most of us, was the teaching of Paul Tillich. Two of his favorite themes will always remain with me: theological answers to philosophical questions and his distinction between essential man and existential man. Although he was a theological liberal, far to the left of my own views, I was impressed with Professor Jules Bewer’s (B.D. 1898) passionate concern for social justice and the Old Testament prophets. For his requirement of readings, in the church fathers themselves and his balanced view and outlook, I greatly appreciated the church history courses I took with Cyril Richardson. In my first year at Union, some twenty theological students made national news. Not wishing to support the war in any form, they refused to register for military service even though they were assured “4D” exemption as theological students. Eight of the twenty persevered, and each spent one year in prison. This unusual story at times brought reporters to the campus. One of our best-known classmates, Roger Shinn ’41, ’51, supported the war against Hitler and ignored the 4D exemption to join the army as a buck private. Later on he became Reinhold Niebuhr Professor of Social Ethics at Union. At Union I also met Dr. Josef Hromadka, then recently arrived from war-torn Czechoslovakia, who did an informal series of lectures. I ultimately followed him to Princeton Seminary for the doctoral work I completed there.

How have you stayed connected to Union?
I remember well Roger Barney, whom I followed a year later from Dartmouth. I remember also the young lady from his Union class of ’40, Jane Lockwood, whom he married shortly after their graduation. In the prime of his life, he contracted polio and later died from it. Jean Dale and I visited his wife, Jane, some time later on a trip back East.

What would you say to someone considering going to Union?
I wish I was abreast of the Union of today, but seventy-five years is a long way back. It was an excellent school and contributed much to my preparation for ministry and my life as a whole, at a time of great world turmoil.