A Call and Response to Anti-Black Violence

We are all being called and have been called to this moment. Many of us are wrestling with the urgency, the desire, and the need to respond. Union held a special chapel service today, titled “A Call and Response to Anti-Black Violence: Challenged to Transform,” led by EDS at Union Dean Kelly Brown Douglas.

During the chapel service, we shared a collection of ways to give, get involved, and stay informed. This is not an all-inclusive list, but a starting point for you to consider ways to give of yourself in this moment. 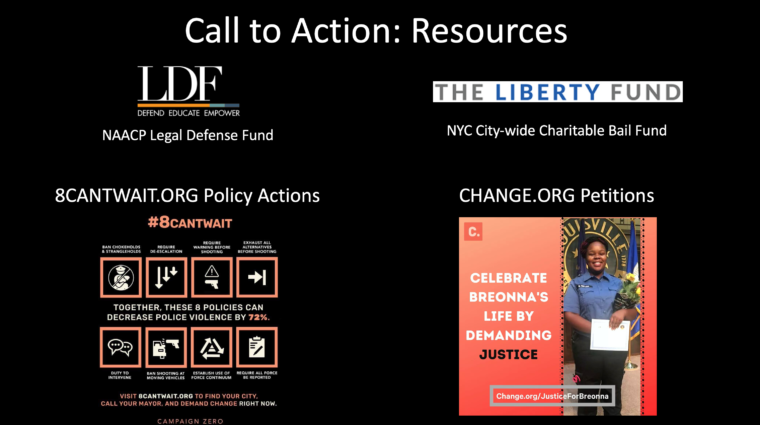 America’s premier legal organization fighting for racial justice. Through litigation, advocacy, and public education, LDF seeks structural changes to expand democracy, eliminate disparities, and achieve racial justice in a society that fulfills the promise of equality for all Americans. LDF also defends the gains and protections won over the past 75 years of civil rights struggle and works to improve the quality and diversity of judicial and executive appointments.

The #8CantWait policies are simple, common-sense and would make our community safer. A project of Campaign ZERO, a data-informed platform that presents comprehensive solutions to end police violence in America. It integrates community demands and policy recommendations from research organizations and President Obama’s Task Force on 21st Century Policing.

The Liberty Fund is dedicated to reducing the number of New Yorkers subjected to unnecessary pretrial detention while simultaneously providing much needed social services to this population.  We will achieve this by providing bail and case management services to any qualifying client throughout the pendency of their court case. The Liberty Fund will reduce the pretrial jail population, prevent the poorest New Yorkers from having their lives upended and their freedom sacrificed, and provide support in order to avoid future interactions with the criminal justice system.

On Change.org, people everywhere are starting campaigns, mobilizing supporters, and working with decision-makers to drive solutions.

The Mass Poor People’s Assembly & Moral March on Washington is going digital! On June 20th, we will hold the largest digital and social media gathering of poor and low-wealth people, moral and religious leaders, advocates, and people of conscience in this nation’s history. A global pandemic is exposing, even more, the already existing crisis of systemic racism, poverty, ecological devastation, the war economy and militarism, and the distorted moral narrative of religious nationalism. On June 20, the 140 million poor and low-income people across this nation will be heard!