It is impossible to escape the African Renaissance Monument in Dakar, Senegal. The 160-foot bronze statue commands the attention of every person within its proximity. The journey toward the monument requires visitors to climb countless stairs. The monument depicts an African woman with locks owing in the wind as her breast and Herculean thighs extend freely, without the white supremacist, sexist gaze of slavocracy. A muscular African man with legs that blend into the chiseled boulder base embraces the woman with a gentle hand on her back. A toddler sitting on the left shoulder of the man is pointing.

A small, displaced image of Africa lies next to the monument to account for the ways that colonialism has fractured the African continent. The child’s outstretched hand does not point at the displaced Africa. For many, the child represents freedom, hope, liberation, and unity—pointing toward possibilities beyond notions of Western imperialism.

When I asked Dr. Aliou C. Niang, associate professor of New Testament at Union, what it meant for Union to focus on Africa, he said my query took him by surprise because Westerners rarely ask this crucial question. Niang, who grew up in Senegal, says, “Africa has been grossly misunderstood by Westerners who have ideological slants motivated by empire. Africa has been undermined by the slave trade, colonization, and scramble of Africa.” In short, Niang makes a similar point to Achille Mbembe, who believes that Africa exists as a slave to the Western imaginary.

For Niang, a theology of return that allows Africa to speak for itself should orient Union’s focus on Africa. Furthermore, Union’s focus necessitates a journey like the one that faculty and students took to Senegal in May 2018. Niang says, “It’s one thing to talk about a place, but another to see and feel the people, place, and culture.”

Union’s focus on Africa has roots in its historical engagement with black theology, Womanist theology, and EATWOT (Ecumenical Association of Third World Theologians). On a ride to the burial site of Dr. James H. Cone, the father of black liberation theology, Niang and I reflected on Cone’s monumental legacy. The conversation drifted toward Africa as we talked about Cone’s early engagement with Africa, African theologians, and African Traditional Religions (ATR) in many EATWOT meetings. Cone taught about black theology, ATR, and African theology, learning much from Mercy Amba Oduyoye, Emmanuel Martey (Ph.D., ’92), John S. Mbiti, Desmond Tutu, and many more African theologians and thinkers.

These connections to African theologians inspired me to know more. When I mentioned to Niang that I had been attending a session on African philosophy and thought at Columbia University, facilitated by the distinguished Dr. Souleymane Bachir Diagne, he invited me on Union’s journey to Senegal.

At the end of May 2018, a small delegation of Union faculty, students, administration, and staff flew to Dakar, Senegal, to establish partnerships with Gaston Berger University (GBU) and other institutions. Ironically—or providentially—Union professor emeritus of Philosophy and Christian Practice Cornel West happened to be on our flight to Senegal, headed to lecture and dialogue with Dr. Mahamadou Lamine Sagna at the Rencontres & Conférences. NFL Super Bowl champion and activist Michael Bennett was also on our flight on a quest to dig deep into his own Senegalese roots. The plane carried us, with our braided aspirations, over the deep Atlantic waters on our respective journeys to Africa.

The Civilizations, Religions, Arts, and Communication Center at GBU, located about 160 miles from Dakar in Saint-Louis, is a unique center seeking to train students to be global scholars inside and outside Africa. Union’s group met with faculty and students at GBU to imagine what a partnership between the schools could be and to explore the mutual bene ts of an exchange program. Having Union students and professors learning in Senegal, while GBU professors and students learn at Union, is the type of rich program that Ph.D. student Olusola “Shola” Adegbite (S.T.M., ’14) feels is crucial for Union to explore a deeper understanding of African nations and people.

Adegbite, a student from the Yoruba tribe in southwest Nigeria, says, “International students feel that professors do not understand what it means to come from a very different environment. So, for professors to go to Africa and stay there for a while, it would change them in meaningful ways.” Adegbite also thinks that focusing on getting more African students to Union is essential.

Studying in Senegal would provide an exploration of the nation’s largely Muslim community and allow for immersion in the food, music, and lifestyle of the culture. During our time in Dakar and Saint-Louis, which coincided with Ramadan, we heard prayers rise up from mosques, shared a delicious evening meal of grilled lamb dibi with our hosts, saw children play soccer in the streets, and enjoyed the precious melodies from thekora and ngoni instruments.

A trip to Gorée Island was one of the most impactful experiences. This was one of the places where countless kidnapped Africans were loaded onto ships headed to America. As the Union delegation entered the House of Slaves on the island, we were captivated by the “Door of No Return.”

I wondered, “How could so much pain fit through such a small door?” The top floor of the house—where colonizers laughed, danced, and drank alcohol as they glanced out of the wide windows of economic opportunity that faced the vast Atlantic Ocean—was spacious and brightly colored. A very different picture lay beneath their feet.

Standing in the small, dark, damp rooms, we could almost hear the cries of African men, women, and children packed separately like cargo. Tearfully we touched the walls and the dirt ground, remembering the inhumanity incited to break bodies and spirits. When colonizers looked out toward the Atlantic, they saw profit; when the captured Africans looked toward the Atlantic, they saw nothing but pain—a point of no return. How could so much catastrophe be buried in the beauty of Gorée Island?

Remarkably, Niang thinks that we should rethink the “no return” language regarding Gorée Island. If Gorée was a biblical text, it might be read like Phyllis Trible’s (Ph.D., ’63) Texts of Terror. However, Niang says, “If I were to read the Bible on Gorée, the Door of No Return would be interpreted differently.” Although black theology has centered on the Exodus story, Niang believes that 2 Kings and the Babylonian exile demonstrate a way to return to Gorée. For Niang, the fact that we were able to visit the Door of No Return is evidence that we can return and reconnect with our African roots.

Union alumni/ae have also felt the pull to the continent of Africa. In the summer of 2019, Union alumni/ae Gilbert Bouhairie (M.A., ’14) and Onleilove Alston (M.Div./M.S.S.W., ’11) organized
a voyage to Ghana with the Samuel DeWitt Proctor Institute, which included an opportunity for African Americans to obtain dual Ghanaian citizenship. Alston’s work with Bouhairie emerged in Dr. Samuel Cruz’s African Religions class. 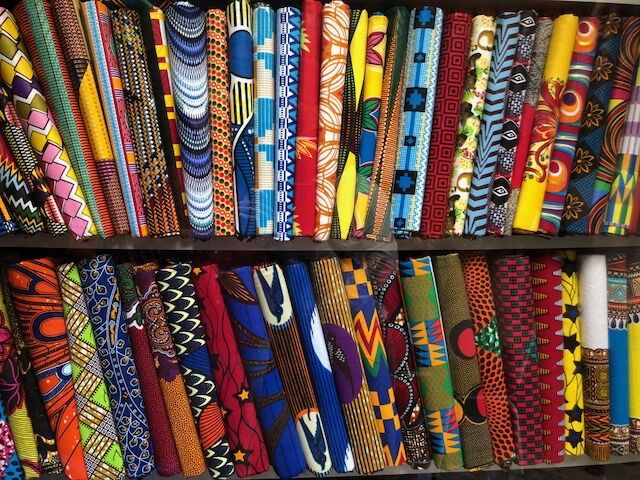 Michael Elam (M.Div., ’07) traveled with them and was stunned from the moment he arrived. When the bus pulled up to Cape Coast Castle, the chief and young boys with banners welcomed the group. “They took us to the back of the castle to go through the Door of No Return and poured libations,” Elam says. “The entire African Diaspora needs to go home. When I was there I felt my DNA jumping. I felt like I took my ancestors home.”

The seeds planted in Cruz’s African Religions course also inspired Alston to research Jewish tribes and West and Central African tribes, looking at their experiences in relation to scripture. Alston was invited to Nigeria and Ghana to visit African Jewish communities. Her research led to the publication of her book, Prophetic Worldwind: Uncovering the Black Biblical Destiny.

Union’s African connections also include scholarly pursuits in South Africa. Last year I traveled with Dr. Andrea C. White, associate professor of Theology & Culture, who was invited as a plenary speaker at the International Barth Conference in Stellenbosch, South Africa. She and other scholars such as Dr. Willie James Jennings, Dr. Setri Nyomi, Dr. Raymond C. Carr, and Dr. Rothney Tshaka engaged the theme “Embracing Things Past and Things to Come.” The plenary addresses challenged how legacies of slavery, the Holocaust, and apartheid still haunt us. Pictures of the theologians who perpetuated apartheid hang on Stellenbosch University’s walls as black and brown bodies teach and learn amongst them.

We traveled to the home at the Drakenstein Correctional Centre near Cape Town, where Nelson Mandela was placed on house arrest. We walked where Mandela walked and breathed the air of his living space and garden. In Mandela’s house, we heard the testimony of a fellow revolutionary who was arrested with Mandela. After sitting with his stories of ght, fear, and resilience, we walked out of the freedom gate Mandela exited years ago.

Although we learned much from the individual presentations, the contextual Bible study we had with other youth and young adults was the seminar’s highlight. We began with their experiences and realities, read the chosen Bible passages carefully, and ended with the experiences of the community. Contextual Bible study was challenging for many scholars who were accustomed to using historical-critical methods. Not only did Union students and faculty learn much about the daily realities of Pietermaritzburg youth, but we gathered new insights about the Bible.

In New York City, engagement with Africa persists. At Union, many students have learned about ATR in courses taught by professors Niang, Cruz, Dr. Cláudio Carvalhaes (Ph.D., ’07), and others. Adegbite says that Niang’s class on “Mark and Healing” challenged her to connect her personal background with the reading material. She considered Jesus a shaman because a shaman had a well-rounded role in society as a healer and teacher. She also says, “In Nigeria there is a myth [Myth of Ela] about someone sent by God who did a lot of good things for people. The people wanted to kill him, but he ran away, and God gave him a long chain to climb into heaven.” 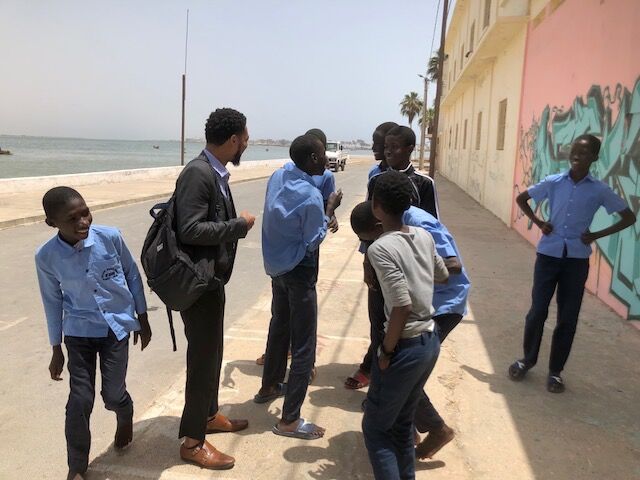 Carvalhaes, who will teach a class on Latin American and African liberation theologies with Dr. Vuyani Vellem, believes that we should start with knowledge from Latinx, African, and Asian thinking. Carvalhaes believes that he must enter the experiences of Africans and African Americans to talk about their worldviews and has established a partnership with African scholars to further this work. “The banoz, that feeling of having been uprooted, of longing, of displacement of African people who were brought to the U.S., has repercussions in the blues and jazz and spirituals,” Carvalhaes says. “It correlates with the songs of indigenous people, with undocumented Latinxs and their songs called corridos.” Because Africa is the cradle of our humanity, Carvalhaes challenges Paul Tillich’s use of the “ground of being.” Carvalhaes says, “The ground of being is African! It is the earth!”

It is not uncommon to find Union students on 116th Street in Harlem, with its Pan African community and restaurants. At night you will see sun-kissed boys and girls playing soccer like the beautiful children in Saint-Louis. Late in the midnight hour, you will see black bodies dancing to Afrobeats from across Africa and animated by South African Gqom. You may find others making the journey home at the newly constructed Africa Center beside Central Park.

As Union continues its focus on Africa in its many complexities, textures, smells, and experiences, it is important to center Africa’s focus on us. The knowledges, theologies, and voices of Africa must be central as we take a posture of mutual learning and collaboration.