This past academic year provided a unique opportunity for the Episcopal Divinity School at Union to reimagine how it delivers instruction, supports its students, celebrates worship and frames its role in the public square. At the same time, it was also an opportunity to get a glimpse of what might be possible if EDS at Union entered into a more regular, collaborative partnership with two institutes at Union Theological Seminary: The Center for Earth Ethics headed by Karenna Gore, and the Kairos Center for Religions, Rights and Social Justice led by Rev. Dr. Liz Theoharis. 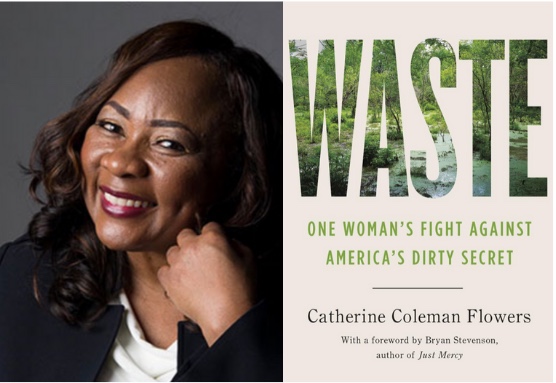 One immediate fruit of this collaboration was the selection of MacArthur Fellowship awardee Catherine Flowers’ book Waste: One Woman’s Fight Against America’s Dirty Secret as EDS at Union’s Spring community read. For the third year running, EDS at Union selected a book it asks all students to read. Waste exposed students to the role that faith leaders can play in some of the most challenging environmental justice and poverty issues today. The students’ reading of this book was capped off by a public panel in which The Very Rev. Kelly Brown Douglas, Dean of EDS at Union, moderated a conversation between Flowers, Gore and Theoharis

Waste tells the story of Flowers’ hometown of Lowndes County, Alabama, a place that earned the label “Bloody Lowndes” because of its violent history during the Civil Rights era. Lowndes was also the county seat of Hayneville, AL, where the young Episcopal Theological School (ETS) seminarian Jonathan Daniels was murdered on August 20, 1965.1 Once the epicenter of the voting rights struggle, today Lowndes County is a place where basic sanitation — including an affordable means of disposing cleanly of waste from toilets — is still missing for many residents.

As the Center for Rural Enterprise and Environmental Justice founder, Catherine Flowers received a MacArthur Foundation Fellowship in 2020 for her work in bringing attention to this largely invisible problem of inadequate waste and water sanitation infrastructure in rural communities in the United States. A critical part of her work has been building coalitions across partisan political divides to turn the nation’s attention to the environmental justice factors plaguing poor rural communities.

Throughout Waste, both EDS at Union and the larger Union community play prominent roles in Coleman’s story. Partners Rev. William Barber of the Poor People’s Campaign and Rev. Dr. Liz Theoharis of the Kairos Center are documented as having attended a tour Flowers gave of impacted areas in Lowndes County in 2018.

“This day was different than other times I’d given tours because of our guests’ belief in the social justice teachings of the Gospels. In my mind, I imagined they were disciples from the Bible. Unlike other prominent people who simply passed on their way to Selma, they came to hear and see people who had been rendered voiceless because of poverty and inequality.”

An underlying question for the selection of each community book read is, “What is the role of faith leaders today in addressing the injustice that the Gospels cry out against?” What becomes clear in Flowers’ book Waste is that this work is done together, in collaborative partnerships, and with an eye toward the intersecting worlds of faith and justice. This is the same principle that is guiding EDS at Union’s increasing collaboration with the Center for Earth Ethics and the Kairos Center, partnerships that will continue to bear fruit in the coming academic year and beyond.