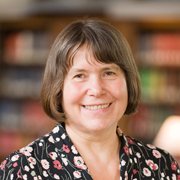 Brigitte Kahl is an innovative New Testament scholar whose work has been groundbreaking in Pauline studies. She brings a new perspective to Biblical scholarship by analyzing the dynamic relationship between the New Testament and the Roman Empire. In her pioneering book, Galatians Re-Imagined: Reading with the Eyes of the Vanquished (2010), Dr. Kahl re-defines the traditional paradigm of Pauline interpretation and radically recasts justification by faith as a theology of resistance and transformation.

A native of East Germany and an ordained minister, Dr. Kahl studied and taught at Humboldt University in Berlin between 1970 and 1997, earning two doctorates in New Testament and Ecumenics (1983/86). Her first major publication in German (1986) dealt with the theological and political dialectics of the Gospel for the Poor and the Gospel for the Gentiles in Luke-Acts. She worked with the World Council of Churches and held a chair in Biblical Exegesis and Interpretation at Paderborn University in Westphalia before joining the faculty at Union in 1998. She is also an Associate Professor at the Religion Department of Columbia University. Her classes at Union engage in Critical Re-Imagination of Biblical texts and contexts. This novel interpretive approach and pedagogical method draws on the use of ancient art and architecture to illuminate imperial Roman constructs of power and identity, and to show how New Testament texts both reflect and contradict them. She also analyzes the way in which this power dynamic is embedded in contemporary Western civilization.

From 2004 onwards, Dr. Kahl played a primary role in organizing Union’s two landmark conferences and a series of consultations on New Testament and Roman Empire. A leading feminist interpreter, she collaborated as an inclusive-language translator and consultant in the much-debated new German Bible translation Die Bibel in gerechter Sprache (2006) and other projects. Her teaching involves close cooperation with the Poverty Initiative at Union which co-taught her courses on “Reading the Bible with the Poor” and “Paul and Poverty.” She has published and lectured extensively, both in English and German on Paul, Luke/Acts, Genesis and a broad range of topics in biblical interpretation, with an emphasis on the intersecting areas of peace and ecology, gender and social justice, anti-Judaism and anti-Islamism. Her current research interests include trans-disciplinary approaches to Paul, Roman antiquity, semiotics of images and architecture, empire-critical and post-colonial hermeneutics, Pergamon, Asia Minor and ancient Galatia/Gaul. She is working on a feminist, empire-critical commentary on Galatians through the lens of ancient art and an Aesthetics of Resistance informed by Peter Weiss and Pier Paolo Pasolini.

FALL 2020, FALL 2021
This course offers a condensed introduction to the core texts, narrative trajectories, historical backgrounds and theological concerns of the Bible as the canonical book both of Christianity and Western civilization. Key questions regarding the ethics of scriptural interpretation in the context of race, gender, class, ecology and an increasingly inter/nonreligious environment are discussed.

JANUARY 2022
Paul is arguably the most controversial figure in New Testament scholarship right now. Was he a political conservative or a radical? A traitor or faithful follower of Jesus? Should students read Paul as the canonical root- source of Christian antisemitism, patriarchy, pro-slavery, and homophobia – or as the protagonist of a worldwide transformation towards justice and a non-binary messianic (trans)identity built on Other-love? This course is a condensed introduction to Pauline key topics, texts and historical contexts.