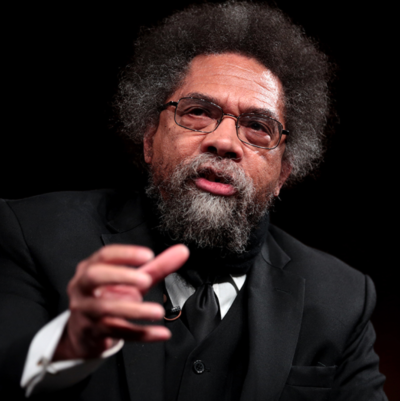 Dr. Cornel West is the Dietrich Bonhoeffer Chair at Union Theological Seminary. Dr. West teaches on the works of Dietrich Bonhoeffer, as well as courses in Philosophy of  Religion, African American Critical Thought, and a wide range of subjects — including but by no means limited to, the classics, philosophy, politics, cultural theory, literature, and music.

He has written 20 books and has edited 13. He is best known for his classics, Race Matters and Democracy Matters, and for his memoir, Brother West: Living and Loving Out Loud. His most recent book, Black Prophetic Fire, offers an unflinching look at  nineteenth and twentieth-century African American leaders and their visionary legacies.

Dr. West is a frequent guest on the Bill Maher Show, CNN, C-Span and Democracy Now.  He has a passion to communicate to a vast variety of publics in order to keep alive the legacy of Martin Luther King, Jr. – a legacy of telling the truth and bearing witness to love and justice.

FALL 2021
This course examines two prophetic figures of the Twentieth Century. Both are exemplary in their profound thought, moral courage, genuine spirituality, and willingness to confront xenophobic ways of life.

FALL 2021
This course examines the classical works of three modern intellectuals: W.E.B. Du Bois, Lorraine Hansberry and Toni Morrison. Students wrestle with the rich formulations, subtle arguments and courageous visions of three Black thinkers who continue to speak with power and passion to our turbulent times.

SPRING 2022
This course seeks to explore the life and teachings of Mohandas K. Gandhi and Martin Luther King, Jr. Recent years have seen a considerable expansion of the literature on both figures. The time is ripe for a reconsideration of their legacy with respect to such central questions as the viability of nonviolent resistance in a context of neoliberalism, ecological devastation, the relationship between spirituality and political engagement, and the conflict between religious traditions. What is the meaning and promise of their double legacy for our time? What can both figures teach us about interreligious dialogue and learning? What is the relationship between the work of Gandhi and King and the later emergence of liberation theology? What can we learn from Malcolm X’s critique of King, B. R. Ambedkar’s critique of Gandhi and feminist critiques of both?