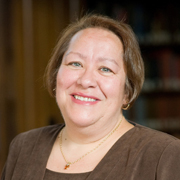 Daisy L. Machado serves as Professor of Church History. Her scholarship focuses specifically on United States Christianities. She holds a B.A., Brooklyn College; an M.S.W., Hunter College School of Social Work; a Master of Divinity, Union Theological Seminary, New York; and a Ph.D., University of Chicago. She is the first U.S. Latina ordained in the Christian Church (Disciples of Christ) in 1981 in the Northeast Region and has served inner city congregations in Brooklyn, Houston, and Fort Worth.

From 1996-1999 Dr. Machado served as the first Director of the Hispanic Theological Initiative a $3.4 million project funded by The Pew Charitable Trusts to increase the presence of Latina/o faculty teaching in seminaries, schools of religion and religion departments around the country. From 2002-06 she served as the Chair of the Board of the Hispanic Summer Program an innovative masters level program currently supported by over 30 seminaries and schools of theology. Dr. Machado was also Luce Lecturer in Urban Ministry, Harvard Divinity School, Cambridge, Massachusetts and Lecturer at the University of Texas Southwestern Medical School, Dallas, Texas, teaching a class on “Latina/o Spirituality and Medicine.” In July 2008 she was invited to serve as chaplain for Week 3 of the Summer Season at the Chatauqua Institute, making her the first Latina to serve as chaplain. Her daily sermons were preached to a gathering of over 600 participants every day. In spring 2010 she presented the keynote address for the Institute for Lived Theology held at the University of San Diego, California, titled “Borderlife and the Religious Imagination.”

A native of Cuba, Dr. Machado was raised in New York, lived in Texas for twenty years, and lived in Lexington, KY for two years, where she served as Vice President for Academic Affairs and Dean of Lexington Theological Seminary. Dr. Machado has a great interest in the concept of “borderlands,” which is a multilayered word that not only refers to a specific geographic location, but for Latinas and other women of color also refers to a social, economic, political, and personal location within the dominant culture. She is also a strong advocate for a comprehensive reformation of current U.S. immigration laws, especially now that Arizona has enacted SB 1070.

Dr. Machado’s current research and writing project focuses on the Prosperity Gospel in the U.S. Latino Protestant communities with a special look at the G-12 Movement, which has been imported from Colombia. Her course CH333, “Religious Movements from the Margins: A Look at the Prosperity Gospel in the U.S.,” introduces the student to the development of the prosperity gospel ideal in the U.S. religious landscape and how this ideal has played out historically in racial ethnic communities.

Dr. Machado is also involved the early stages of a longer-term research project with Dr. Evelyn Parker of Perkins School of Theology, Dallas, called “God Behind Bars,” which seeks to investigate and interpret the religious reality of Latina and African American women inmates. A first consultation was held at Perkins in May 2009 and a second at Union in August 2010. Each consultation gathered recently released female Latina inmates as well as prison chaplains, social workers, and selected directors of church-run prison ministries, to talk about religion and the religious life of incarcerated women of color. A second phase of the project will involve interviewing African American and Latina inmates who are incarcerated.

Eugenics, Race, Gender, and Nation: A Brief History (Fall 2015)
Religious Movements from the Margins: A Look at the Prosperity Gospel (Spring 2015)
History of Christianity since Reformation (Fall 2017)
The U.S. Latino Church: Borderlands and History (Spring 2018)