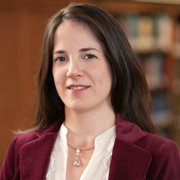 Professor Esther J. Hamori earned her B.A. at Sarah Lawrence College with a major in Violin Performance in 1994. She received the M.Div. at Yale Divinity School in 1997, and her Ph.D. from the Department of Hebrew and Judaic Studies at New York University in 2004. Before joining the Union faculty she was a Visiting Assistant Professor of Hebrew Bible in the Department of Near Eastern Studies at Cornell University, and visiting faculty at Sarah Lawrence College.

Dr. Hamori’s research is focused on various forms of divine-human contact and communication in Israelite and other Near Eastern religious literature. Her second book, Women’s Divination in Biblical Literature: Prophecy, Necromancy, and Other Arts of Knowledge (Yale University Press, 2014), brings to light the full range of women’s divinatory activities as portrayed in the Hebrew texts. Her previous book investigates particular forms and functions of divine anthropomorphism (“When Gods Were Men”: The Embodied God in Biblical and Near Eastern Literature; de Gruyter, 2008), and she has published articles demonstrating the use of birth omens in Israel, the gendered distinctions in the requirements for secondary verification of prophecy in the Akkadian letters from the city of Mari, the use of the Gilgamesh epic in the writing of the story of Jacob in Genesis, and more.

Dr. Hamori is co-chair of the Society of Biblical Literature’s section on Prophetic Texts and Their Ancient Contexts, and a longtime member of the steering committee of Hebrew Scriptures and Cognate Literature. She serves on the editorial boards of the series Ancient Near Eastern Monographs (SBL) and Critical Studies in Hebrew Bible (Eisenbrauns), and regularly presents papers at the Society of Biblical Literature and other professional meetings.

Her recent service at Union has included organizing the Hebrew Bible Colloquium, which meets 4-6 times a year over lunch for an informal presentation and open discussion. Presenters have included Ph.D. students and leading scholars in the field. Some colloquia are joint endeavors with our neighbors at Jewish Theological Seminary and have included discussion of textual interpretation, methodological issues, and broader topics such as the relationship between critical scholarship and faith. Dr. Hamori received two awards from New York University for excellence in teaching, and prioritizes thoughtful pedagogy and student advisement.

SPRING 2022
Divination" refers to types of actions that are, within their own cultural contexts, understood to provide access to divine knowledge. Prophecy is the best-known type of divination in the Bible and the most widely embraced, but there are many more, including astral, birth, and dream divination, necromancy, and lot-casting. In this course, students study prophecy and other types of divination as they appear in the Bible and elsewhere in the ancient Near East.

SPRING 2022
This course includes an introduction to Job in the context of other Near Eastern wisdom literature, focused study of various literary and theological aspects of the book, and exploration of artistic treatments of Job.