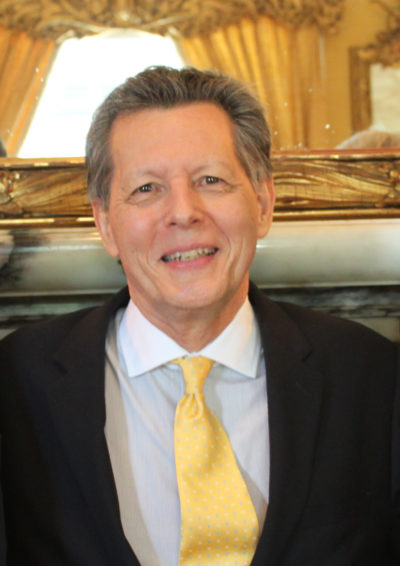 Gary Dorrien teaches social ethics, theology, and philosophy of religion as the Reinhold Niebuhr Professor of Social Ethics at Union Theological Seminary and Professor of Religion at Columbia University. He was previously the Parfet Distinguished Professor at Kalamazoo College, where he taught for 18 years and also served as Dean of Stetson Chapel and Director of the Liberal Arts Colloquium. Professor Dorrien is the author of 21 books and more than 300 articles that range across the fields of social ethics, philosophy, theology, political economics, social and political theory, religious history, cultural criticism, and intellectual history.

Social critic Michael Eric Dyson wrote in 2021: “Gary Dorrien is the greatest theological ethicist of the twenty-first century, our most compelling political theologian, and one of the most gifted historians of ideas in the world.” Philosopher Cornel West describes Dorrien as “the preeminent social ethicist in North America today.” Philosopher Robert Neville calls him “the most rigorous theological historian of our time, moving from analyses of social context and personal struggles through the most abstruse theological and metaphysical issues.” Dorrien told an interviewer in 2016: “I am a jock who began as a solidarity activist, became an Episcopal cleric at thirty, became an academic at thirty-five, and never quite settled on a field, so now I explore the intersections of too many fields.”

In 2017 Dorrien won the Grawemeyer Award for his book The New Abolition: W. E. B. Du Bois and the Black Social Gospel. The citation quoted theologian William Stacy Johnson: “This is a magisterial treatment of a neglected stream of American religious history presented by one of this generation’s premier interpreters of modern religious thought operating at the top of his game.”

In 2012 Dorrien won the Association of American Publishers’ PROSE Award for his book Kantian Reason and Hegelian Spirit: The Idealistic Logic of Modern Theology, which cited philosopher Frederick Ferré: “Gary Dorrien is a superstar interpreter of modern religious thought. This unique, fascinating, aggressively revisionary book will have no competition until books appear to argue against it.”

More than 50 reviewers described Dorrien’s trilogy, The Making of American Liberal Theology, as definitive. Modern Intellectual History said it set a new standard for religious intellectual history. The Journal of Markets and Morality called it “monumental, encyclopedic, breathtaking.” The Expository Times called it “an endeavor best described, by all accounts, as magisterial, definitive, and authoritative.”

Dorrien has written about economic democracy and social justice politics, post-Kantian philosophy, and modern theology throughout his career. His early books on these subjects include Reconstructing the Common Good (1990), The Neoconservative Mind: Politics, Culture, and the War of Ideology (1992), Soul in Society: The Making and Renewal of Social Christianity (1995), The Word as True Myth (1997), and The Barthian Revolt in Modern Theology (2000).

Three of Dorrien’s books on social justice topics derive from his lecturing at universities, conferences, civic groups, and religious communities. Imperial Designs (2004) grew out of his extensive speaking against the U.S.’s invasion and occupation of Iraq. Economy, Difference, Empire: Social Ethics for Social Justice (2010) features his lectures on economic democracy, racial and gender justice, and anti-imperial politics. The Obama Question: A Progressive Perspective (2012) draws upon lectures he delivered during President Obama’s first term.

The third and concluding volume of Dorrien’s history of the Black social gospel tradition will be published by Yale University Press in 2023 under the title A Darkly Radiant Vision: The Black Social Gospel in the Shadow of MLK. Dorrien is currently completing a single-volume history of American theological liberalism titled The Spirit of American Liberal Theology.

In recent years he has taught as the Horace De Y. Lentz Visiting Professor at Harvard Divinity School, the Paul E. Raither Distinguished Scholar at Trinity College, and Lowell Visiting Professor at Boston University School of Theology. Dorrien lectures frequently in Germany, England, and Canada, and writes for Cross Currents, American Journal of Theology and Philosophy, Tikkun, Christian Century, Telos, Commonweal and other journals. His wife, Brenda Biggs, a Presbyterian minister, died of cancer in 2000; his partner Eris McClure is a fitness trainer; and his daughter Sara Biggs Dorrien-Christians and son-in-law William Christians are Presbyterian pastors in Memphis, Tennessee.

Social Ethics in the Making with Rev. Dr. Gary Dorrien

SPRING 2021
This course studies the thought of Immanuel Kant and G.W.F. Hegel within their social and historical contexts and the influence of Kantian and Hegelian idealism in modern theology. Focus is on the epistemology, metaphysics, ethics, and philosophy of religion of Kant and Hegel and the impact of their thought on Schleiermacher, Schelling, Kierkegaard, Troeltsch, Whitehead, Barth and Tillich.

FALL 2020
Study of the development of American liberal theology in the nineteenth and early twentieth centuries, focusing on the Unitarian controversy, Transcendentalism, Horace Bushnell, early feminism, liberalism and racial justice, the social gospel, evangelical liberalism, personalism, and the Chicago school. Acquainting students with the modern historical, ethical, and theological tradition that is Union's tradition, it is the first of two courses on American theological liberalism.

FALL 2021
This course studies the early black social gospel tradition of theology, ethics, and politics that arose after the Civil War and provided the "new abolition" theology of social justice that undergirded the civil rights movement of the 1950s and '60s. It covers the development of this tradition up to the generation of figures who were role models and mentors for the leaders of the civil rights movement. One of two courses on the black social gospel, featured are such figures as William Simmons, Reverdy Ransom, Ida B. Wells-Barnett, Alexander Walters, W. E. B. Du Bois, Adam Clayton Powell Sr., George W. Woodbey, Nannie Burroughs, Molly Church, Richard R. Wright Jr., Mordecai W. Johnson, Benjamin E. Mays, and Howard Thurman.

SPRING 2022
This course studies the later black social gospel tradition that arose in the 1870s and provided the "new abolition" theology of social justice that undergirded the civil rights movement of the 1950s and '60s. The period covered is from the civil rights movement to the present day, featuring Martin Luther King Jr, Pauli Murray, numerous leaders associated with the NAACP, the Southern Christian Leadership Conference, and the Student Nonviolent Coordinating, and numerous theologians, political leaders, pastors, and organizers affiliated with Black theology, the womanist tradition, liberation theology, and postcolonial criticism.

FALL 2021
This course brings ecological, economic and ecofeminist perspectives into a conversation that introduces students to leading works in these areas and explores relationships between and among the three "eco" subjects.

SPRING 2022
This seminar focuses on the current social ethical work on social justice and international politics, emphasizing feminist and liberationist criticism, imperial overreach, racial justice, theories of cultural difference, and ecojustice economics. Secondary themes raised with an interdisciplinary approach include the relationships between religion and society, theology and ethics, and social ethics and other disciplines.