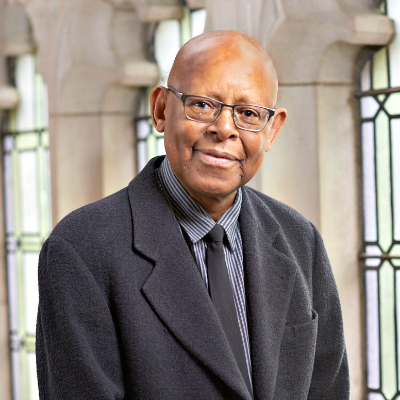 Professor James H. Cone, known as the founder of black liberation theology, was the Bill and Judith Moyers Distinguished Professor of Systematic Theology at Union Theological Seminary. He attended Shorter College (1954-56) and held a B.A. degree from Philander Smith College (1958). In 1961, he received a Master of Divinity degree from Garrett Theological Seminary and later earned an M.A. (1963) and Ph.D. (1965) from Northwestern University. Dr. Cone was conferred thirteen (13) honorary degrees, including an honoris causa from the Institut Protestant de Théologie in Paris, France.

Among his numerous awards were the American Black Achievement Award in religion given by Ebony Magazine (November 1992), the Fund for Theological Education Award for contributions to theological education and scholarship (November 1999), the Martin E. Marty Award for the Public Understanding of Religion (2009), the Eliza Garrett Distinguished Service Award in recognition of seminal theological scholarship from Garrett-Evangelical Theological Seminary (2010).

Dr. Cone was an ordained minister in the African Methodist Episcopal Church. He is listed in the Directory of American Scholars, in Who’s Who in America, Who’s Who in American Religion, Who’s Who among African Americans, and Who’s Who in the World. He was the author of twelve (12) books and over 150 articles and lectured at many universities and community organizations throughout the United States, Europe, Africa, Asia, Latin America, and the Caribbean. He was an active member of numerous professional societies, including the Society for the Study of Black Religion, the American Academy of Religion, and the Ecumenical Association of Third World Theologians (EATWOT) in the Philippines, and was a founding member of the Society of Race, Ethnicity, and Religion (SRER).

Dr. Cone was best known for his ground-breaking works, Black Theology & Black Power (1969) and A Black Theology of Liberation (1970); he was also the author of the highly acclaimed God of the Oppressed (1975), and of Martin & Malcolm & America: A Dream or a Nightmare? (1991); all of which works have been translated into nine languages.  The 30th Anniversary of the publication of Black Theology & Black Power was celebrated at the University of Chicago Divinity School (April 1998), and a similar event was held for A Black Theology of Liberation at Garrett-Evangelical Theological Seminary (April 2000) and at the Catholic Theological Society of America (June 2001). His research and teaching were in Christian theology, with special attention to black liberation theology and the liberation theologies of Africa, Asia, and Latin America.  He also taught 19th & 20th century European-American theologies. His 2012 book, The Cross and the Lynching Tree, received the 2012 Nautilus Silver Award in Religion/Spirituality-Western Traditions. It was an Amazon.com #1 best seller in religion in February 2012. Naming it one of the top religion books of 2011, Huffington Post editors said: “One of the great theologians of the late 20th century, Cone forces us to look hard at suffering, oppression and, ultimately, redemption.”