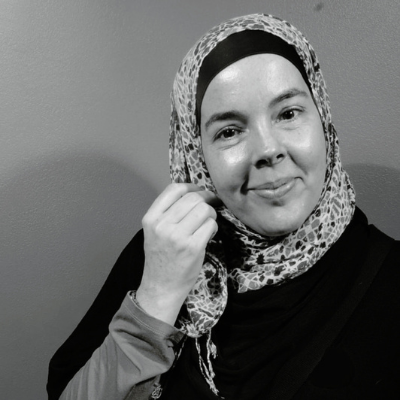 Dr. Rhodes’ first book, Never Wholly Other: A Muslima Theology of Religious Pluralism (Oxford University Press, March 2014), explores the Qur’anic discourse on religious ‘otherness’. In this book, she draws upon feminist theology and semantic methodology to re-interpret the Qur’anic discourse and challenge notions of clear and static religious boundaries by distinguishing between and illuminating the complexity of multiple forms of religious difference.

Dr. Rhodes is currently working on two book projects. The first is a book on interreligious engagement, which introduces central questions, concerns, and strategies for effective and ethical engagement. The project underscores the necessity of an interreligious consciousness, especially for religious and ethical leaders, and explores the intersections among religious diversity, racism, sexism, and religious supremacy. The second project is focused on interreligious and multireligious engagement in Ghana, West Africa. It explores various historical and contemporary examples of engagement with the goal of uncovering recurring norms and values that are relevant to other multireligious contexts.

Dr. Rhodes’ other publications focus on religious pluralism, Muslima theology, ecumenical relations, Vatican II, and African traditional religions. They include “Beyond the Rays of Truth? Nostra Aetate, Islam, and the Value of Difference,” in Nostra Aetate & the Future of Interreligious Dialogue (Maryknoll: Orbis, 2017); “Toward a MuslimaTheology: Constructive, Theological, and Comparative Possibilities,” Journal of Feminist Studies in Religion Vol. 33, No. 1 (Spring 2017); “Thinking Differently about Difference: Muslima Theology and Religious Pluralism,” The Journal of Interreligious Studies, Issue 13 (Winter 2014); “Lateral and Hierarchical Religious Difference in the Qur’an,” in Understanding Religious Pluralism (Wipf & Stock, 2014); “Embracing Relationality and Theological Tensions: Muslima Theology, Religious Diversity, and Fate” in Between Heaven and Hell: Islam, Salvation, and the Fate of Others (Oxford Univ. Press, 2013); “From Sexual Difference to Religious Difference: Toward a MuslimaTheology of Religious Pluralism” in Muslima Theology: The Voices of Muslim Women Theologians (Peter Lang, 2013); “‘Mapping’ the Religious Other: The Second Vatican Council’s Approach to Protestantism,” Journal of Ecumenical Studies 45:4 (Fall 2010); and “Mysticism in African Thought” in New Dictionary of the History of Ideas (Scribner & Sons, 2004).

SPRING 2021
This course introduces the central concerns, sources, and debates of Islamic ethics. We explore the relationship between Islamic ethics and other Islamic religious sciences-including usul ul-Qur'an (Qur'anic sciences), fiqh (law), and ibadat (ritual), and survey key classical perspectives and scholars (available in translation). The course then examines contemporary perspectives on a variety of topics, including gender and sexuality, interreligious relations, economics, environmentalism, medical ethics, and violence and pacifism. Throughout all, emphasis is placed on developing proficiency in the terminology and tools of Islamic ethical thought; on understanding the interconnections between various conceptions of the Divine, the human person, and society; and on understanding the ways in which diversity and context shape ethical perspectives.

SPRING 2022
This course examines Islamophobia and anti-Muslim hate in the context of the United States. The course introduces historical, theological, cultural, legal, and institutional aspects of Islamophobia, and probes the ways in which Islamophobia intersects with anti-black racism, sexism and hegemonic feminism, and religious supremacy. The course also focuses on diverse strategies for combatting Islamophobia, and requires students to articulate their own, contextually responsive strategies.

SEPTEMBER 2020, FALL 2021
This course introduces Islamic religious thought by exploring foundational sources, religious sciences, institutions, and debates related to theology, exegesis, law, and ethics. Emphasis is on connections and distinctions among various branches of religious thought; diversity within traditions; and major theologians, exegetes, scholars, and jurists. A foundation is provided for students focused on Islam, as well as for students seeking a robust introduction to Islam.

SPRING 2022
This course aims to introduce students to the Qur'ān—the central touchstone in Islamic thought and practice— through intensive engagement with the text (in translation) and through exploration of the historical, practical and interpretative traditions surrounding the text. The course surveys historical origins and development, highlights the Qur'ān’s pervasive role in the daily lives, rituals and artistic expressions of Muslims, and examines Qur'ānic form, content, and interpretation.

SPRING 2021
This course explores the feminist theological thought in Islam and Christianity, utilizing the theoretical lens of comparative theology. It aims to cultivate an understanding of both traditions by exploring theological methods (the “hows”) and theological subjects (the “whats”). It also probes the manner in which critical comparison of the two traditions complicates and potentially enriches each tradition.