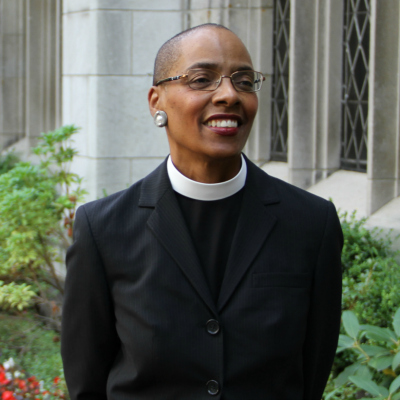 The Very Reverend Dr. Kelly Brown Douglas was named Dean of the Episcopal Divinity School at Union Theological Seminary and Professor of Theology at Union in September 2017.  She was named the Bill and Judith Moyers Chair in Theology in November 2019.  She also serves as the Canon Theologian at the Washington National Cathedral and Theologian in Residence at Trinity Church Wall Street.

Dean Douglas is widely published in national and international journals and other publications.  Her most recent book, Resurrection Hope: A Future Where Black Lives Matter, was published in November 2021 (Orbis Books). Her groundbreaking and widely taught book Sexuality and the Black Church: A Womanist Perspective (1999) was the first to address the issue of homophobia within the Black church community.  Her Stand Your Ground: Black Bodies and the Justice of God (2015) examines the challenges of a “Stand Your Ground” culture for the Black church.

Dean Douglas’ other books include The Black Christ (1994, 25th Anniversary edition 2019), What’s Faith Got to Do with It?: Black Bodies/Christian Souls (2005), and Black Bodies and the Black Church: A Blues Slant (2012), which seeks to move the Black church beyond its oppressive views toward LGBTQ bodies and sexuality.

In addition to preaching in pulpits and speaking at universities and other institutions around the globe, Dean Douglas is a frequent and vocal presence in today’s print, broadcast, and digital public square, speaking on racial and social justice, among other matters.

A native of Dayton, Ohio, Dean Douglas was ordained at St. Margaret’s Episcopal Church in 1983 — the first Black woman to be ordained an Episcopal priest in the Southern Ohio Diocese, and one of only five nationwide at the time.  She also was the first to receive the Anna Julia Cooper Award by the Union of Black Episcopalians (July 2012) for “her literary boldness and leadership in the development of a womanist theology and discussing the complexities of Christian faith in African-American contexts.”

Dean Douglas was an Associate Priest at Holy Comforter Episcopal Church in Washington, D.C. for over 20 years.

She serves on the Public Religion Research Institute’s (PRRI) Board of Directors and is a member of Aspen Institute’s Religion & Society Program, the American Academy of Religion, the Union of Black Episcopalians, the Society for the Study of Black Religion, and the Ecumenical Association for Third World Theologians.

She has been recognized with honorary doctorates from General Theological Seminary (2022), her alma mater Denison University (2021), and Ithaca College (2021).

SPRING 2021, SPRING 2022
The aim of this course is to provide a basic understanding of the nature of systematic theology as this discipline relates to contemporary social and political issues. Special attention is given to the emergence of liberal, orthodox, and neo-orthodox theologies in Europe and North America and to their impact on the rise of liberation theologies in Asia, Africa, Latin America, within U.S. minorities, and also among women in all groups. It is hoped that students not only clarify their own personal stance but, in addition, come to understand perspectives radically different from their own. Readings are taken from twentieth-century sources.

FALL 2020
An interpretation of the rise of black theology in the 1960s to the present day. Attention is given to different perspectives on black theology, its dialogue with Third World theologies, the responses of Euro-American theologians, and the recent development of womanist theology. Lectures, reports, and discussion.