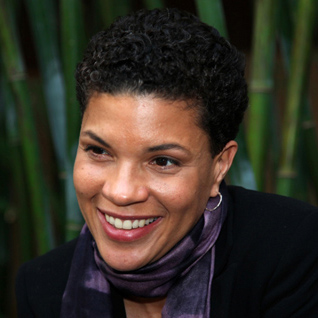 Bio:
Michelle Alexander is a highly acclaimed civil rights lawyer, advocate, legal scholar, and best-selling author.  Her award-winning book, The New Jim Crow:  Mass Incarceration in the Age of Colorblindness, helped to spark a national debate about the crisis of mass incarceration in the United States, and inspired racial justice organizing and advocacy efforts nationwide.  Numerous commentators have dubbed The New Jim Crow “the bible of a social movement,” and the book has become a staple of university curriculums, advocacy trainings, reading groups, and faith-based study circles.   Alexander has been featured on national radio and television media outlets, including, among others, CNN, MSNBC, NPR, The Bill Moyers Journal, the Tavis Smiley Show, MSNBC, C-Span, and Democracy Now!  She has also written for numerous publications including, The New York Times, The Washington Post, The Nation, The Los Angeles Times, and The Huffington Post.

Alexander has taught at a number of universities, including Stanford Law School, where she was an associate professor of law and directed the Civil Rights Clinics.  In 2005, she won a Soros Justice Fellowship, which supported the writing of The New Jim Crow, and that same year she accepted a joint appointment at the Kirwan Institute for the Study of Race and Ethnicity and the Moritz College of Law at The Ohio State University.  In 2015, Alexander accepted an appointment as a Senior Fellow for the Ford Foundation.  Currently, she is a Visiting Professor at Union Theological Seminary in New York City where she is exploring the moral and spiritual dimensions of mass incarceration, and working with other committed souls on multi-media projects aimed at transforming public consciousness with respect to race, justice and democracy in America.

Prior to entering academia, Alexander served as the Director of the Racial Justice Project for the ACLU of Northern California, where she coordinated the Project’s media advocacy, grassroots organizing, coalition-building, and litigation.  The Project’s priority areas were educational equity and criminal justice reform, and it was during those years that she launched a major campaign against racial profiling by law enforcement, known as the “DWB Campaign” or “Driving While Black or Brown Campaign.”

In addition to her non-profit advocacy experience, Alexander has worked as a litigator at private law firms, including at Saperstein, Goldstein, Demchak & Baller, in Oakland, California, where she specialized in plaintiff-side class action lawsuits alleging race and gender discrimination.