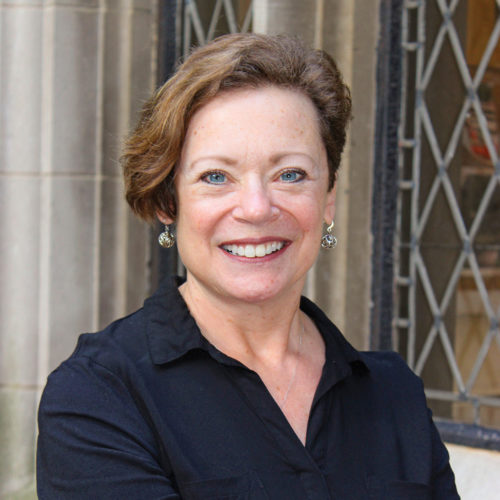 Pamela Cooper-White began her education as an art and music major at Boston University, graduating with a Bachelor of Music degree Magna cum Laude. She went on to earn both a PhD at Harvard University in historical musicology with a dissertation on Arnold Schoenberg’s opera Moses und Aron, and a Master of Divinity with Honors at Harvard Divinity School. Music was a bridge to ministry—she discerned a call to ordained ministry while serving as a church music director. During her MDiv program, inspired by the Catholic Worker movement, she founded and directed a ministry for men and women living on the streets in Salem, MA, and first became involved in working with battered women and their children. While seeking her first call to ministry, she taught musicology from 1982-1983 at UCLA and served as a shelter and hotline volunteer at Sojourn Services for Battered Women in Santa Monica, CA. In 1994 she was ordained to the ministry in the United Church of Christ and was called as Director of San Francisco Partnership Ministry—a coalition of 6 urban churches—overseeing a multi-service agency for Southeast Asian refugees and leading a ministry of accompaniment for Salvadoran pastors who had received death threats.

For two years she resumed her musical career, singing full-time with San Francisco Opera and performing numerous regional solo roles. She returned in 1987 to her work in advocacy and crisis work as Executive Director of the Support Network for Battered Women in Mountain View, which under her leadership received the VIDA award for excellence in multi-cultural human services from the United Way of Santa Clara County. She served as Director of the Center for Women and Religion at the Graduate Theological Union, Berkeley, CA for the next five years, during which time she returned to the Episcopal church of her childhood and was ordained Deacon and Priest. While at the GTU, she completed an MA in Pastoral Counseling and was engaged in pioneering work offering support for victims of clergy sexual abuse, serving as an expert witness, and consulting to numerous churches and judicatories both regionally and nationally re: policy development for professional sexual ethics and abuse prevention. Her well-known book The Cry of Tamar grew out of her work in teaching and advocacy re: prevention of violence against women during this time. Upon moving to Chicago, she served full-time as Priest Associate at St. Mary’s Episcopal Church, Park Ridge, IL and taught part-time at Seabury-Western Theological Seminary in Evanston, IL in the areas of women’s studies, research, and young adult ministry development. During her time in Chicago she was named an Episcopal Church Foundation Fellow, in order to pursue a second PhD in clinical social work (a psychoanalytic training doctorate) with a dissertation on countertransference and the deeper psychological roots of pastoral and therapeutic boundary violations.

She returned to teaching full-time in 1999 at the Lutheran Theological Seminary at Philadelphia, as associate and then full Professor of Pastoral Theology. In 2005 she received the American Association of Pastoral Counselors’ national award for “Distinguished Achievement in Research and Writing,” and in 2007 the Samaritan Counseling Center of Philadelphia’s Spirit Award for “individuals who through their sensitive, empathic and creative service, enhance the lives of individuals, encourage growth in relationships, and promote healthy community.” She was called in 2008 to the faculty of Columbia Theological Seminary as the Ben G. and Nancye Clapp Gautier Professor of Pastoral Theology, Care and Counseling and Co-Director of the Atlanta Theological Association’s joint ThD program in Pastoral Counseling with Columbia, Candler School of Theology/Emory University and the Interdenominational Theological Center (ITC). In 2013-14 she was awarded a Fulbright Fellowship as the Fulbright-Freud Scholar of Psychoanalysis in Vienna, Austria, conducting research on the history of psychoanalysis and religion at the Sigmund Freud Museum, and teaching at the University of Vienna.

Dr. Cooper-White is an ordained Episcopal priest, a certified clinical Fellow in the American Association of Pastoral Counselors, a Licensed Clinical Professional Counselor in Illinois, and a Board Certified Counselor with the National Board for Certified Counselors. Past two-term Co-Chair of the Psychology, Culture, and Religion Group of the American Academy of Religion, she currently serves on the PCR-AAR Steering Committee, and on the Editorial Board of the Journal of Pastoral Theology (formerly as Publications Editor).  She is a founding board member and newly elected President (2018) of the International Association for Spiritual Care (Bern, Switzerland).

She is married to the Rev. Michael Cooper-White, DD, President Emeritus of Gettysburg Seminary (now United Lutheran Seminary) in Gettysburg, PA, and they share a home in the orchard lands west of Gettysburg. They have three adult children (living across the country in Chicago, Omaha, and Los Angeles) and three young grandchildren. Dr. Cooper-White continues her early interests in art and music as a soprano soloist with the Gettysburg Chamber Orchestra and other groups; her photography has been published and exhibited in several solo and juried shows locally in Pennsylvania and nationally.

SEPTEMBER 2020, FALL 2021
This course is primarily designed for entering students as an introduction to the major themes, concepts, and controversies within the fields of theological study, including Christian theology, social ethics, biblical studies and the study of sacred texts, church history, practical theology (including preaching, worship and arts, education, religion and society, andspiritual care), and interreligious engagement (including Buddhism and Islam studies). Students engage in lively dialogue with Union faculty from a variety of disciplines through video and live interviews, and discussion forums.

PS 415
Readings in Psychoanalysis: From Object Relations to Relationality
More

SPRING 2022
This seminar explores the development of relational thought beginning with Freud and object relations, and into a 20th century flowering of relational approaches broadly defined – including self-psychology and the intersubjectivity “school”, Sullivan, the interpersonalists and feminist relational-cultural theory, relational psychoanalysis, and contemporary gender and race critique within psychoanalysis. Weekly case study work integrates theological reflection and pastoral clinical praxis.