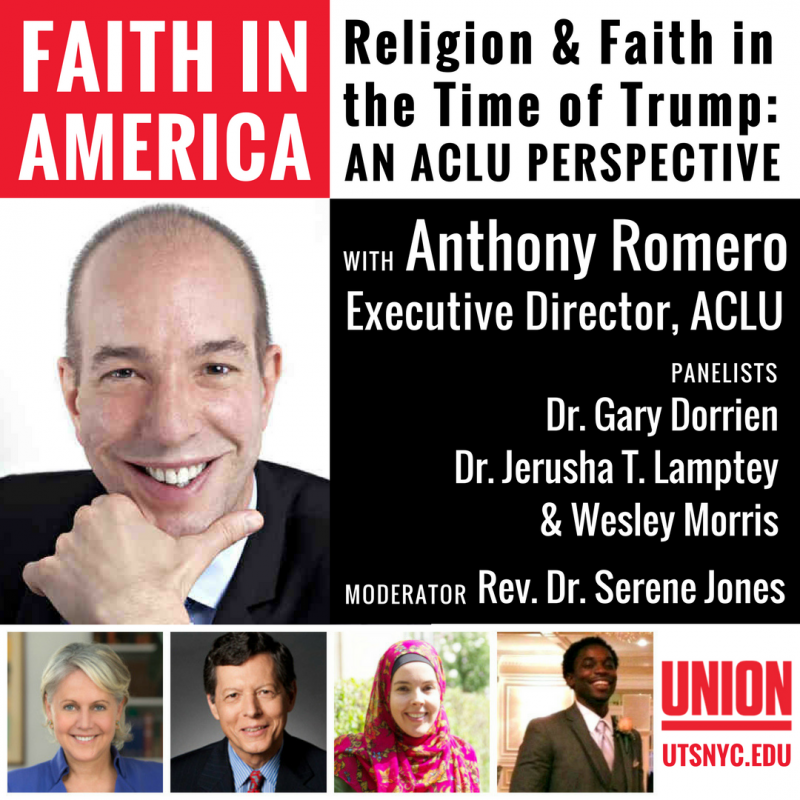 This compelling and timely program will explore how civil liberties advocates and the broader faith community are aligning their values in opposition to a Trump Administration that seeks to demonize immigrants and refugees, and calls for massive deportations and bans based on religion. Mr. Romero will be joined by a distinguished cross-section of the Union community, including:

In December 2015, when then Republican Presidential front-runner Donald J. Trump stated that the United States should close its borders to all Muslims—Protestant clergy, prominent evangelicals, and the U.S. Conference of Catholic Bishops—all lambasted him. Thirteen months later, Mr. Trump is President, and his immoral calls to ban Muslims may indeed become law. The terrible fallout from the recent Executive Order banning travelers, immigrants, and refugees from seven Muslim-majority countries has been heartbreaking and chaotic—and immediately felt by refugees of all religious backgrounds.

Under the leadership of Mr. Romero, the ACLU and other partner organizations are leading an aggressive legal challenge to the ban, charging it violates the Constitution. “Identifying specific countries with Muslim majorities and carving out exceptions for minority religions flies in the face of the constitutional principle that bans the government from either favoring or discriminating against particular religions,” said Mr. Romero in a statement earlier this year. “Any effort to discriminate against Muslims and favor other religions runs afoul of the First Amendment.”

Together, Mr. Romero and the evening’s panelists will address how Union and the broader faith community can align with, bolster and amplify the work of secular groups like the ACLU, not only on matters related to compassionate immigration policies, but on criminal, environmental and economic justice reform.

‘Faith in America’ events are free and open to the public. Union Theological Seminary will stream the February 23rd event live, and the series will be archived on Union’s YouTube channel.

About Anthony D. Romero
Anthony D. Romero is the executive director of the American Civil Liberties Union, the nation’s premier defender of liberty and individual freedom. An attorney with a history of public-interest activism, Mr. Romero has led the ACLU in landmark lawsuits challenging Arizona’s anti-immigrant law that invites law enforcement to engage in racial profiling; in its high-profile litigation and lobbying efforts to win the freedom to marry for same-sex couples; and in its nationwide Campaign for Smart Justice, which aims to achieve a 50% reduction in the number of Americans behind bars.

In 2007, Mr. Romero and co-author and NPR correspondent, Dina Temple-Raston, published, “In Defense of Our America: The Fight for Civil Liberties in the Age of Terror,” a book that takes a critical look at civil liberties in this country at a time when constitutional freedoms are in peril.

Born in New York City to parents who hailed from Puerto Rico, Mr. Romero was the first in his family to graduate from high school. He is a graduate of Stanford University Law School and Princeton University’s Woodrow Wilson School of Public Policy and International Affairs.