Field education at Union provides an opportunity for students to bring together their education, skill, and religious commitment in a way that can help them discover their call. Students do their field work in a wide variety of locations, from churches to shelters to non-profit organizations.

Hassan Henderson-Lott, now a 3rd year student at Union, worked at CARSS, the Center on African-American Religion, Sexual Politics, and Social Justice at Columbia University. CARSS advances research, education and public engagement at the nexus of religion, race and sexuality, in general, but with a particular focus on black communities, both in the United States and the wider African Diaspora.

Could you describe what you do at CARSS?

I’m an intern at CARSS and I’ve gotten to interact with many of its components. I’ve worked on content, sat in on working group meetings, and participated in community advisory board meetings, where I can give insight from my perspective as a current student. I’ve also worked to prepare for different community conversations or town halls.

What kind of talks have you helped organize?

The first one I participated in took place over the summer, before I was officially a field ed intern. Derrick and I went to Oakland, California to visit City of Refuge Church where Bishop Yvette Flunder is the pastor. We enagaged the community in a conversation about the experiences of Black LGBT folk in church contexts and particularly how they see their lives at City of Refuge, which is an open and affirming ministry. We heard about the church’s role in their lives, which includes traumas, but also victories and celebrations. The conversation itself was diverse and rewarding. It was maybe four or five hours, with eight or nine people in attendance—an intimate conversation but there was a wide age range. I was the youngest and the oldest was probably in their seventies! That was my introduction to the work I’m doing at CARSS, and since then, we’ve engaged many different communities. We structure conversations to fit the particularities of the locale: Oakland is very different from Baltimore, which is very different from Atlanta.

How do you feel that Union had prepared you for this role?

Just having time to read, study, and really get into the grit of a particular interest has been really rewarding and effective for the work I do at CARSS. If I take a course on queer theory or race, I can directly apply those concepts to my work here. At Union, I’ve experienced the intersectional ways that those courses are in conversation with one another. Church history speaks to queer theory and theology, which speak to a Baldwin class with Dr. James Cone, which speaks to World History with John Thatamanil. These things are not divorced from one another; they’re happening in different classrooms but in very cohesive ways.

Learning to identify what triggers or traumas people might be speaking from is helpful for the work we do here. CARSS is a research center, so we’re dealing with quantitative and qualitative data. It’s also a very pastoral mode of being: we hear people’s stories, listen intently, and acknowledge or even attempt to remedy traumas. I’ve seen how folk have shifted during our conversations. People’s hair comes down, their shoulders relax, and they become comfortable with the space. They speak differently and sit in their chairs more comfortably. We have church while we are researching, and it’s really an amazing thing. 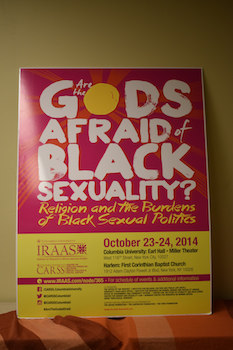 Even though you’re doing research, how has working in this space influenced your pastoral fullness?

“Fullness” and “calling” are words that really resonate with me. I like the way that we organize and structure the community conversations – even the chairs. It speaks to the way I see my pastoral identity emerging. We’re all in a circle or semi-circle and the organizers don’t sit in front of anyone, so the conversation emerges from the people. It’s an alternative to an authoritative mode of pastoring, which has been more harmful for me as a queer Black identifying person. There’s a sense of cohesion among people when we’re able to be together as a community and shape the norms and theologies for a particular conversation.

What are some the particular challenges of your work?

Traditionally, both the academic and the pastor have been authorities who speak to and for a community. There’s so much that I personally, and CARSS institutionally, cannot know or respond to. But we can always learn, listen, and respond as best we can. Realizing my own limitations and the limitations of an institution is both difficult and rewarding. There’s some tension because of the assumption that people and institutions should act as authorities.

How has this work affected your faith?

My faith is so much more intentional. I grew up in church and it was very habitual. Now I have to sit down and theologically reflect, not because it’s in the syllabus but because life is throwing curveballs at me. I have to intentionally deal with what life is about and what God is doing in, through, and with me.

What else have you learned about yourself?

I’ve been in school all my life, but this is the first time I’ve been able to apply my education in a practical way. It was intimidating to come into CARSS and actually apply this stuff. I can read a book and write a paper, but being at CARSS has proven I can apply that learning in people’s lives. It’s not only possible but necessary. I think that being here has proven that I’m responding to God’s call.