When Ravi Ragbir woke in Manhattan on January 11, readying himself for his regular immigration check-in, he had no idea that he would be spending that night incarcerated at the Krome Detention Center in Miami. Likewise, his wife Amy Gottlieb did not foresee she would soon be separated 1,200 miles from her husband—fearing he would be deported. Ravi’s case highlights a cruel and capricious immigration system that shatters families and fractures communities, even in so-called “sanctuary cities” like New York.

Two weeks later, a hundred or so New Yorkers braved the bitterly cold morning to join The New Sanctuary Coalition’s weekly Jericho Walk, which circles the New York City Immigration Court in Federal plaza. The Coalition has organized these walks for years to protest our country’s unjust immigration laws, but this week’s gathering had greater urgency. Since 2011, Ravi has served as the Coalition’s executive director; his detention and pending deportation weighs heavy on the hearts of those assembled.

Together, the group recites a prayer, led by Rev. Micah Bucey, a 2014 M.Div. graduate from Union. Bucey now serves as a pastor at Judson Memorial Church and is a dynamic leader in the New Sanctuary Coaltion. Bucey, fittingly, is wearing a stole that bears the likeness of Archbishop Oscar Romero, a man who gave his life defending the vulnerable from their government. When asked why he feels called to this public witness, Bucey looks puzzled. “The God that I have committed myself to; the Scriptures I profess belief in; the faith that I try to embody calls me to welcome the stranger, calls me to welcome migrants and immigrants through any door I’m able to open,” he responds, “I don’t know that I know how to be a minister unless I’m doing that.”

You notice something when speaking with immigration activists: Injustice is never abstract. Rather, it is palpably embodied in the victims our system targets, and reflected in the sorrows of families and communities that love them. It is personal.  Those who gathered were not organized by an ethereal connection to “fair immigration laws”, but by direct ties to specific immigrants. “I came out today because Ravi is a friend,” says Dawn Stewart-Lookkin, “I sing in the Stop Shopping Choir with Reverend Billy and Ravi was a bass with us. So this feels super personal.” Toby Emmer, too, came to bear witness in defense of folk she loves. “I work in the UAW region 9A education program,” she says, “Many of the students in our program and in our community classes are in DACA or are undocumented seeking papers. I am here for them. I must put my body on the line, and make my voice heard.”

Ravi’s situation also puts a fine point on sanctuary cities’ limitations in protecting their residents. Officially, that moniker means that police will not inform federal immigration officials if they arrest an undocumented immigrant. This narrow definition of “sanctuary”, however, offers scant protection for many immigrants who are targeted by ICE. New York’s sanctuary city status did not stop Ravi’s detention, nor the recent deportation of New Sanctuary Coalition co-founder Jean Montrevil. Even the promise of local police not to collaborate with immigration officers is murky at best. “There were NYC police officials clearing the way for the ambulance taking Ravi to detention for deportation,” Emmer notes. 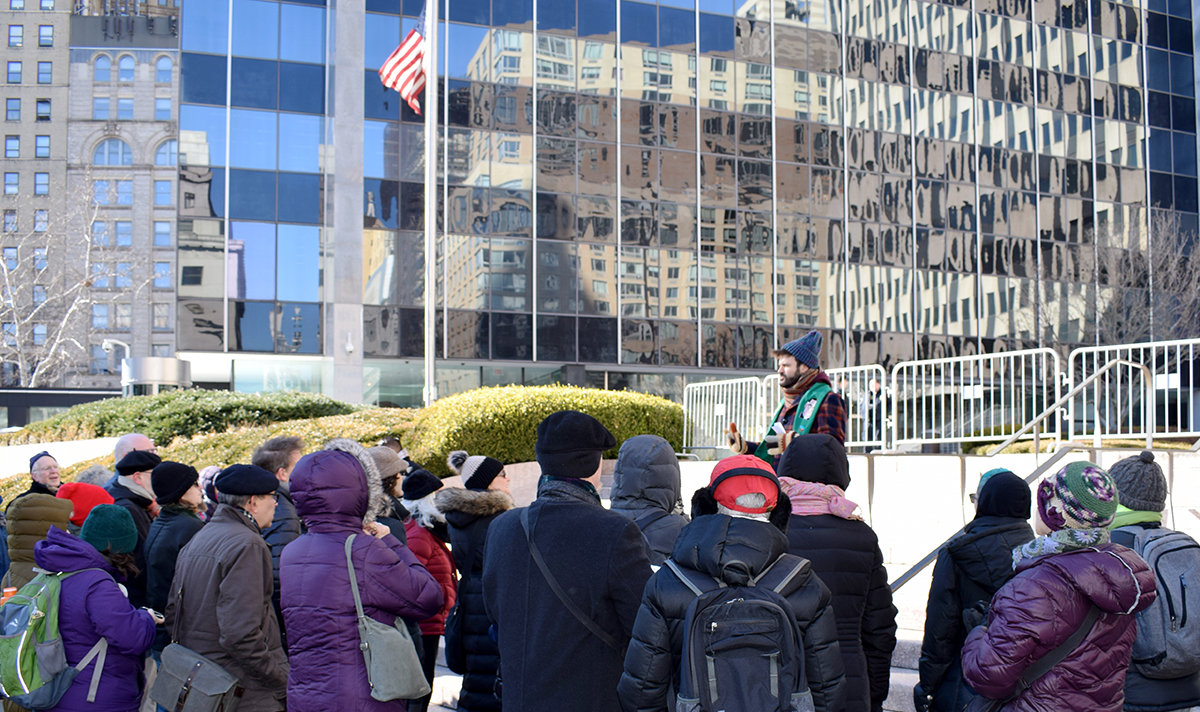 In the face of such acute suffering, Bucey says, we cannot simply hope that New York’s sanctuary status will keep people safe. Absent comprehensive immigration reform, a prospect that grows dimmer by the day, “it becomes the citizens’ responsibility to actually show what being a sanctuary city means.” For Bucey, true welcome must be grounded in relationship: “Sanctuary means that we embody the word, that we become sanctuaries for one another and protect one another.” Another minister attending the walk—Rev. Emily Brewer, a 2015 M.Div. Union graduate—concurs. “We live in a city that prides itself on being a diverse and vibrant place,” she says, “If that is indeed who we are, we have an obligation to stand up for our neighbors when their existence is threatened.”

These feelings of personal responsibility for neighbors’ safety unite the crowd gathered at 26 Federal Plaza, but they also provide a roadmap for how New York can live into its promise of refuge. It’s a call to move beyond a hypothetical commitment to immigrants’ safety and enter into relationship with immigrant communities. Too many profess deep concern at the repeal of DACA, for example, without personally supporting those targeted for deportation. If currently “unaffected” New Yorkers befriended some of the more-than 3 million immigrants living among us, our immigration system’s present depravity would be met by far more vigorous outcry. How could it not be? Once you form a relationship with someone, you cannot remain silent when that person is ripped from the fabric of your community. Thinking of her friend, Stewart-Lookkin’s eyes well up with tears. “He’s a human being,” she cries, “No one should be deported; there’s no reason for anyone to be ripped from their family.”

Indeed, the weekly Jericho Walk is as much about bearing public witness to this moral calamity as it is about changing the hearts of those who work inside the building they circle. “It’s based on the Hebrew Bible, where the walls of Jericho came tumbling down because folks walked around it seven times,” Bucey explains, but he notes that many who make the walk are ignorant of the action’s biblical roots. They walk, instead, because “the idea of circling a place of pain—gathering your warmth around a place that’s so cold—that really speaks to people whether they’re part of an Abrahamic tradition or not.”

As community members like Ravi and Jean are rounded up, New Yorkers face a choice: Will we simply lament this evil from afar, or will we place our bodies between the vast machine of deportation and its targets? For people of faith, in particular, this question cuts straight to the heart of our convictions—do we believe in God’s call to welcome and shelter immigrants enough to take action, or will we watch from the sidelines as violence is done to our neighbors? If the rending of our community—the destruction of families—is insufficient cause for action, our fervent prayers and beautiful Scripture mean little. “I can talk about the battle of Jericho, I can talk about what happened centuries ago in our mythology,” Bucey says, “but why not try to embody it? That’s a much better idea.”