Hearing the Cry of the Earth

The roots of ecotheology and environmental justice at Union run deep, and its tendrils and branches reach far. And, in both Union’s and the movement’s long history, the cry of the Earth is inextricably linked with the cry of the poor.

For Brigitte Kahl, professor of New Testament at Union since 1998, the seeds of ecojustice were planted, quite literally, during her childhood in post–World War II East Germany. “Growing up poor, we were subsistence gardeners, my mother, my grandmother, my sisters and I,” she says. “Because, as a gardener, you are dependent on the natural world, I was always appalled that nature and theology were a ‘no-go’ in many ways. Nature is pagan, I learned. We have to rule over it rather than taking care of it, as a still widely prevalent interpretation of the biblical ‘mandate to dominate’ in Genesis 1:28 posits—very bad theology!”

A world and a generation away in Brazil, Cláudio Carvalhaes, Ph.D. ’07—who has widely acknowledged Union’s role in his transformation from “a shoeshine boy into a scholar”—also invoked a childhood in poverty. “I grew up in São Paulo in the midst of concrete,” recalls Carvalhaes, associate professor of worship, “and I didn’t know—as I still don’t know—the most elementary things about nature. I just had my mother, who grew up grounded in the earth, talking to plants and singing to them throughout the day and treating them as her babies.”

For recent graduate Katilau Mbindyo, M.Div. ’19—whose journey led her to the U.S. from her native Kenya to pursue her education at Vassar College, Union, and now Harvard’s Ph.D. program—discerning and understanding God’s plan for her life in light of the climate crisis is central to her vocation.

“When the call to seminary came, I realized that just as much as we would need doctors to care for the sick and suffering, we would also need ministers to tend to the soul,” she says. “The question that kept on running through my head was, ‘Who will tend to the spirit as we all stop ignoring what is imminent? Who will be the voice of comfort when we realize that this Earth is the promised gift from God, which we have squandered because bad theology informed us that heaven was elsewhere?’”

At Union, Mbindyo found that she had the freedom to put together her own curriculum, which she designed to honor Black religion, ecoethics, and ecothought. As a student, she chose Union’s interdisciplinary track and designed a concentration in African Spirituality and Ecological Theology.

“After the passing [in 2018] of Dr. [James] Cone, I found myself kind of lost and realized that I had to piece together a Union that would feed my academic endeavors,” Mbindyo says. “I got involved with the Center for Earth Ethics, where I was able to work with Geraldine Ann Patrick Encina and Mindahi Crescencio Bastida Muñoz to learn more about indigenous wisdom. I took Dr. [Aliou] Niang’s Bible and Nature class, as well as a class he taught on African Traditional Religion. … Meeting Dr. Larry Rasmussen [Ph.D. ’70] was also eye-opening to me.” 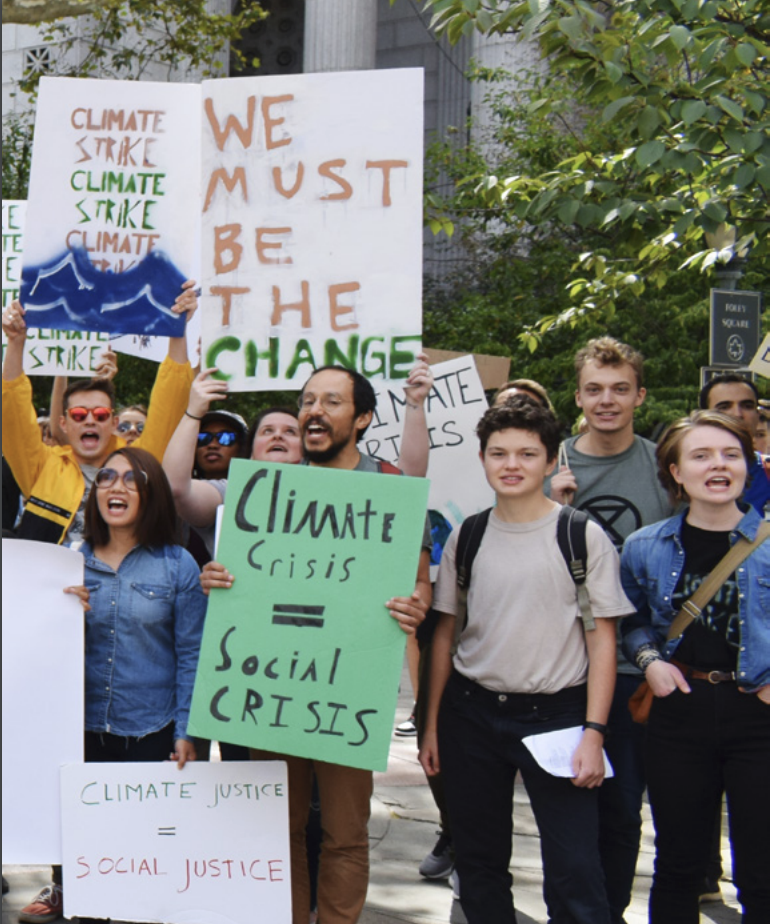 Rasmussen, Reinhold Niebuhr Professor of Social Ethics Emeritus, is widely acknowledged as having launched the study of environmental justice at Union. But he cites other, earlier proponents, namely Roger Shinn, M.Div. ’41, Ph.D. ’51 (d. 2013), whom he says initiated the movement some 20 years before Rasmussen’s own arrival in 1986. “Even when I was a student in the mid-60s, Roger was teaching ‘the limits to growth’ and planetary well-being,” recalls Rasmussen of Shinn, who held the same emeritus title. “Though I left Union in 1969, I remember Roger waving the book The Limits to Growth (1972) in the air when we and others met at Society of Christian Ethics conferences. The premise of the book—and Roger’s mantra—was, ‘You cannot have infinite growth on a finite planet.’ While it was true, it was also ignored. Unending economic growth was orthodoxy, even fundamentalism, and still is, despite the destruction it brings to nature’s economy.”

Shinn and his friend Paul Abrecht, M.Div. ’46 (d. 2005), the church and society staff person for the World Council of Churches (WCC) in the 1960s, collaborated on several WCC projects. With the help of later leadership, their work eventuated in the Justice, Peace and Integrity of Creation conciliar movement of churches around the world and the emergence of the Justice, Peace, and Creation unit of the WCC. Rasmussen, who served as co-chair of that unit’s commission for 10 years through the ’90s, says that, in a sense, he followed Shinn’s leadership on these WCC issues.

“The WCC was far ahead of its own member churches by linking justice, peace, creation, and sustainability from the 1980s and following,” he says. “The 2015 papal encyclical Laudato Si’ was a more powerful and influential statement; but the WCC had connected the dots well before—the cry of the Earth and the cry of the poor.” It was, in fact, at the Seventh Assembly of the WCC at Canberra, Australia, in 1991, where Rasmussen and Kahl first met. On that occasion, members of their team visited Borneo to study the problems of rain forest devastation and resistance of indigenous populations. “I still remember how we were shocked in Canberra at what we learned,” says Kahl. “After that, we got motivated, and that’s when Larry started his work on ecojustice at Union, I believe. His Harlem project was a new approach to doing theology.” Kahl’s reference is to Rasmussen’s teaching at Union in the ’90s, with its distinctive attention to what the Big Ten environmental organizations were overlooking—urban ecology and environmental justice. An article published in The Chronicle of Higher Education, Vol. XLII, #30, April 5, 1996, highlights the fact that Rasmussen’s class took place in New York City neighborhoods with organizations addressing local health/environmental issues, such as West Harlem Environmental Action (WE ACT)

The Legacy of Bonhoeffer and Cone

Such rootedness and engagement continue into the present day at Union through a variety of classes in ecology and Bible taught by Kahl, Carvalhaes, Niang, John Thatamanil (associate professor of theology and world religions), and others, as well as the collective community’s attention to composting, rooftop gardening, work on the “Green New Deal,” and more.

But the story of environmental justice at Union would not be complete without acknowledging the theologian who anticipated it, Dietrich Bonhoeffer, as well as the seminal work of Paul Tillich.

“Without the vocabulary of either ecology or the Anthropocene, Bonhoeffer wrote that an age of unprecedented human power and knowledge that affected everything everywhere had arrived—that’s the Anthropocene,” says Rasmussen. “This unprecedented, pervasive human power requires, for Bonhoeffer, rethinking all the base points of theology for the sake of a new account of human responsibility. ‘Who is God,’ he asks, ‘who is Jesus Christ for us today, what do salvation, redemption, the new life, eschatology, et al., mean in this new epoch? What would liturgy be, a sermon, prayer and Christian practices, etc.?’”

And long before the ecological crisis first burst onto the consciousness of American Protestantism in 1970, Paul Tillich—then teaching at Union—was among the progenitors of Post-World-War II discussions of the interrelationships of religion and nature, and Christianity and ecology. “Nature, Also, Mourns for the Lost Good,” was the title of a chapter in his book, The Shaking of the Foundations (1948). Also in 1948, he wrote, in “Nature and Sacrament,” an essay published in The Protestant Era (1948), “The bread of the sacrament stands for all bread and ultimately for all nature.”

Theologians today—many of them at or formed by Union— are everywhere taking up Bonhoeffer’s and Tillich’s agenda, responding out of their particularity as Black, womanist, Native American, Latinx, LGBTQ+, interfaith, and more. One of the first major statements on Black theology and ecology, “Whose Earth Is It, Anyway?,” was delivered in October 1998 by James Cone (d. 2018), Bill and Judith Moyers Distinguished Professor Emeritus of Systematic Theology, at an international conference on social justice and ecology at Union.

Rasmussen, who organized the conference with Dieter Hessel, recalls asking Cone, not for the first time, to address environmental justice. “Ecology was new territory for him at the time, and he told me he read all summer long in preparation for that address,” says Rasmussen. “It was typical of his discipline, I came to learn. I was deeply moved by his engagement with the issues and the power of his address.”

“People who fight against white racism but fail to connect it to the degradation of the earth are anti-ecological—whether they know it or not,” wrote Cone in his often-anthologized essay, which first appeared in the volume Earth Habitat: Eco-Injustice and the Church’s Response, Dieter Hessel and Larry Rasmussen, editors (Fortress Press, 2001). “People who struggle against environmental degradation but do not incorporate in it a disciplined and sustained fight against white supremacy are racists—whether they acknowledge it or not. The fight for justice cannot be segregated but must be integrated with the fight for life in all its forms.”

A New Approach to Worship

Today’s scholars—with Union at the forefront—are also creating new and different hymns and rituals about the planet. Carvalhaes, whose rituals in both classroom and chapel have garnered national if not worldwide attention, speaks of the impact that plant ecologist, Robin Wall Kimmerer, has had on his life and work. “Since Robin came to Union for a conference when I was on my sabbatical, I was listening to her on YouTube,” says Carvalhaes. “She said, ‘We need to create new rituals; we do not have rituals for this time.’ And when she said that—and because I also deal with rituals—I started crying, saying, ‘My goodness, I need to change.’ And from that day on I decided I needed to change my entire scholarship: I need to change every class that I teach.

In one class that I taught about extractivism, we started to do rituals. In another class about mourning the earth, we were doing the mourning and then creating rituals out of the community.”

New rituals and experiences of worship were also forged by Mbindyo and the other members of the 2018-2019 Chapel Team, which she has called “an ecoministry caucus in its own right.”

“We had our own unique relationship with Earth and the commitment to the liberation of poor and indigenous people, which is probably why almost every chapel that year had to be connected in some way to Earth-centered spirituality,” says Mbindyo. “If we could be outside, we were outside; if we could include fire, water, and earth on the altar, we did so. From Indigenous Peoples Day to the Thursday communion services, to Earth Day, to All Saints Day, to an African traditional ritual led by Professor Niang, to the final chapel which the six of us planned where, in the garden, we gave the final sermon of the school year, it was just a really incredible opportunity to encourage a Christian seminary to worship God’s presence within non-human beings and the elements.”

With the Doomsday Clock now closer to midnight than ever before, theologians, scholars, activists, and practitioners are everywhere raising the stakes.

“We reach for indigenous wisdom and new narratives, institutions, and lifeways just when the margin of error is so small that it generates extinctions on a mass scale,” says Rasmussen, “and we continue to live late-Holocene and fossil-fueled lives. In a word, ours is a very creative, adaptive, and resilient moment in an extremely dangerous time.”