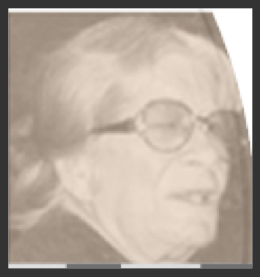 Union Theological Seminary, in partnership with Dr. Samuel Cruz, Associate Professor of Religion and Society, is establishing The Mama Leo Latinx Lecture Series to honor the Puerto Rican spiritual leader, the Reverend Leoncia Rosado Rousseau, known to many as Mama Leo. This lecture series will be held annually to recognize the unconventional and pragmatic leader’s dedication and years of service by inviting speakers to focus on Latinx ministry and social justice. Fundraising efforts are underway to endow the lecture series with $150,000 to sustain it for years to come. Click here to make your gift.

Mama Leo was born in Toa Alta, Puerto Rico on April 11, 1912. It was there, in Puerto Rico, that she first heard the voice of God calling her into service. She arrived in New York City in 1935 because she felt her calling was to bring God’s word to the lost and needy in the Diaspora. Along with her pastor husband, she founded the Bronx-based Pentecostal denomination Council of Damascus Churches in 1940. When her husband was drafted into military service, the Reverend Rosado Rousseau became the first Latina Pentecostal pastor in the city (to our knowledge).

Rosado Rousseau’s ministry was groundbreaking in many ways. She was a pioneer in advocating for sex workers and those addicted to drugs. She established a drug and alcohol rehabilitation program, the Damascus Christian Youth Crusade. This program became a state-wide model and Mama Leo’s ministry garnered recognition for the many followers whose lives were transformed.

She continued to preach, teach and minister well into her nineties. Through this Latina, a movement in the urban center flourished to plant holistic churches that served the poor and addicted. Many still exist today. Suffering from Alzheimer’s disease, the Reverend Rosado Rousseau entered a nursing home in 2005 and passed away in 2006. Mama Leo believed that the church’s mission should include being an agent of positive change in society.

Her ministry has served as a catalyst for many others to open centers of their own for addicts. Some well-known fruit of Mama Leo’s ministry includes Pastor John Gimenez, founder of the Rock Church in Virginia, and Bishop Jerry Kaufman, founder of Love Gospel Assembly in the Bronx.

The Mama Leo Latinx Lecture Series will memorialize her legacy as a Latinx pioneer in the New York City faith community for those like her, who seek to give their lives in service to transforming and liberating the oppressed on the margins of our city and the world.

Life in the Big Apple