From December 6 – 11, a Union delegation traveled to the San Diego/Tijuana border, to work with asylum seekers in Mexico and participate in a protest at the border. Below, they describe their experience, what it taught them about the US immigration system, and what ministry can look like amidst such unjust suffering.

I traveled to Tijuana with trepidation, considerate of concerns about people without knowledge of the local context arriving to contribute to a “cause.” Yet when I got there I was less disturbed by those of us who showed up, whatever our ineptitudes and imperfect Spanish, and more disturbed by how few people seemed to be responding to a literal crisis at the US-Mexico border. Upwards of 6,000 people (including hundreds of small children) are living in crowded tent cities—weeks of limited access to healthcare, food, running water, and social services are taking their toll. Within a few hours of arriving, I grew uncomfortable that I could only stay two days—the need for people on the ground, and more importantly, a sustained presence, felt grave.

I worked primarily as a translator between lawyers with limited to no Spanish and individuals seeking asylum. The lawyers we worked with from Al Otro Lado could not offer much—they are not asylum adjudicators, and the process, “la lista,” by which individuals are lining up to announce themselves at the border is largely arbitrary and completely illegal. Yet the people we spoke to, who had traveled thousands of miles on foot to reach this point, were not trying to fight this reality. The frustration they expressed while waiting their turn in this backward system was something more immediate—there was no one to listen to them, they said, no one with whom they could share their story. So we, a motley crew of immigration lawyers and compassionate ears became their listeners. At the end of each conversation, I mentioned that I was a student of ministry and offered to say a prayer. Each person I spoke to said yes. Together we closed our eyes. Inside, I remembered every detail they had just shared with me, while out loud I spoke a prayer for each aspect of those circumstances—for safety, for health, for the well-being of their children. I opened my eyes over and over again to tearful smiles. I wanted to promise that God had heard us, that God was listening and that everything would be okay, but all I could do was smile back and say goodbye. I believed God was listening, but were the people with the power to make decisions listening to God? Or have we forgotten what our traditions teach us about hospitality, that there is always room at the table for one, or 6,000, more?

What is the role of spiritual and faith leaders when involved in collective social action? Throughout the time spent at the border between Tijuana and San Diego I observed different expressions at different moments. Just as with any person there will be times when it is our role to speak up and take charge, and there will also be times when it is necessary for us as leaders to learn how to follow, listen, and get out of the spotlight. The latter is arguably the more difficult position to take on especially for those who have grown used to being the figurehead of a community, and therefore addressing one’s own ego is necessary for faith leaders. What does it mean to participate in social action by listening to the needs expressed and responding accordingly, even if it means doing something “unglamorous” or out of the spotlight?

At the halfway point of our trip we transitioned to San Diego to take part in a multifaith demonstration and prayer service at the coastal border. I was amazed at the detail and planning of the American Friends Service Committee (AFSC), a Quaker organization, to orchestrate both a multi-religious training and prayer service as well as a day of action bringing together rabbis, imams, pastors, priests, lay leaders, community organizers, and others who wished to participate and respond as people of faith for human rights and border justice. From what I was able to observe, though, I was disheartened to see so many people in one space with only a fraction opting to join teams doing logistical support on the day of, the less glamorous jobs, even after there was an announced need for more to join.

This mirrors a common dichotomy in churches and other religious centers: the divide of tasks between administrative and ministry staff and the implied hierarchy that follows. I am most worried about the ego of all faith leaders, not just those present, and how easy it is for us to elect ourselves into roles of service and advocacy as long as we get public recognition or the ability to network. To progress as leaders, we must increase our awareness of ourselves, our gifts and abilities, and the needs of those around us. We must not fall into the error that leadership is always a solo venture led from the front, but rather reimagine the many different expressions of leadership, and maintain an awareness for our own growing edges related to ego and humility in that context.

As the people attending an asylum workshop began to file in and take their seats, children gravitated to a corner where some of us had set up a few toys. As a Montessori preschool teacher who had volunteered at orphanages in Honduras and Mexico, I felt at home playing with them in the corner and could have stayed there all day. But naturally, before I was mentally prepared, an attorney called me over: a person seeking asylum was awaiting my translating skills that I wasn’t even sure I possessed! By the Grace of God, I listened, I translated, I ingested such horrifying, heinous situations without flinching or crying. I knew I needed to be professional and calm. The people I translated for had diverse scenarios that led them to seek asylum. The attorneys’ job was not to feed them information about how to fabricate a story that U.S. Customs and Border Patrol would believe (a common misconception in conservative U.S. media), but rather, to help them identify the parts of their stories that are relevant to their asylum claim. And, though their backgrounds were diverse, all stories originated from fear of losing their lives because of their identities, which is probable cause for a refugee seeking asylum as established by the United Nations 1951 Convention and 1967 Protocol.

The irony of this refugee crisis is that those seeking asylum in the U.S. are fleeing countries where the economic, social, and political systems were shaped by harmful U.S. foreign policy enacted in the 20th century. The legacy of these harmful policies, legislated by the oppressor upon the historically oppressed, is what drove these people to seek help from the very government that contributed to the systemic problems in the first place and let them fester. These people are not “illegals” looking for higher wages or to murder/rape/sell drugs, as the 45th President incessantly espouses with his poisonous rhetoric, they are refugees seeking asylum according to international law. 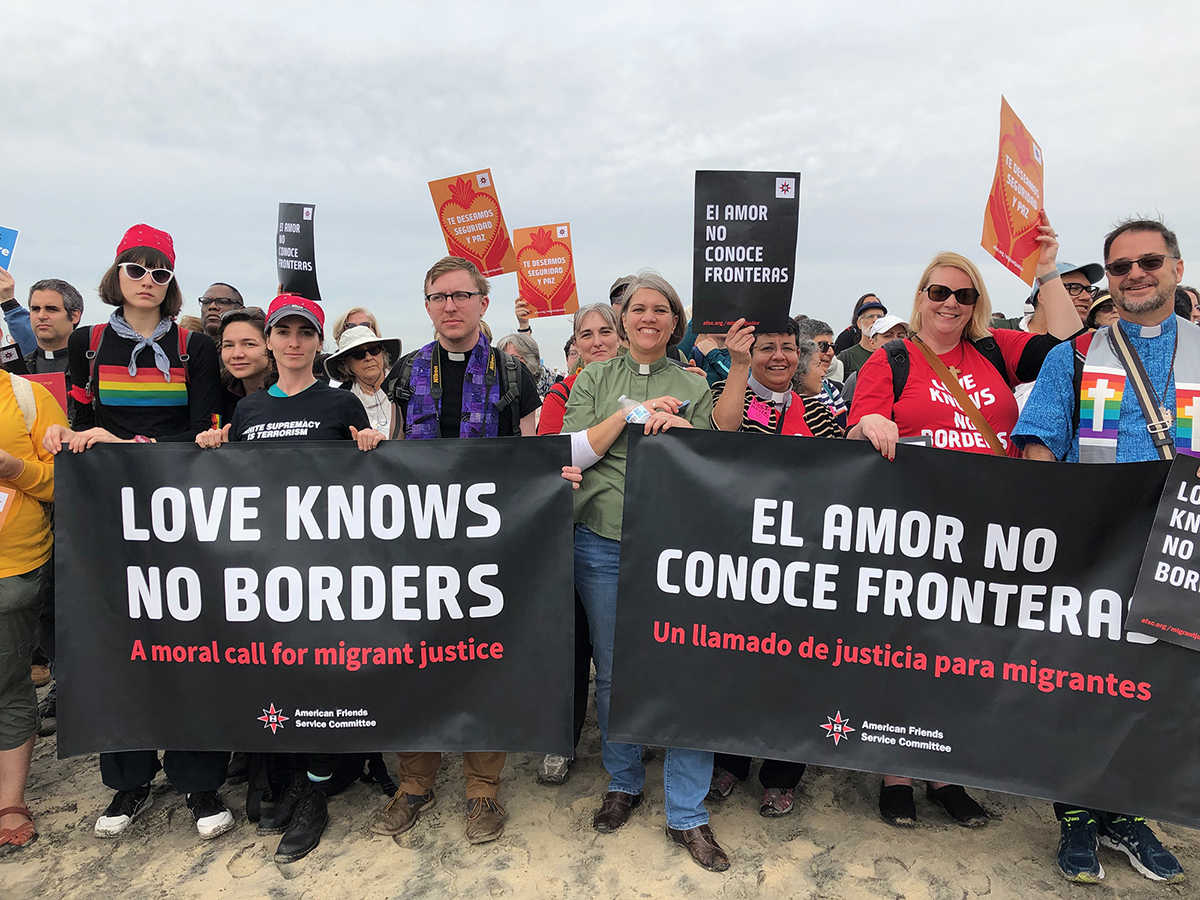 “Love Knows No Borders” served as the overarching theme of the non-violent resistance during the second half of our trip. As I stood on the beach a few hundred feet from the border at Border Field State Park, in the midst of singing and chanting and watching for arrests, I kept looking at the vast ocean and peaceful beach, wondering, “How is it that people have come to own this? To keep others out?” I heard Mavis Staples’ voice in my head singing powerfully, “…Now, if your God won’t help you / You better try mine / My God is a freedom God…”

This land is not mine or yours but ours, and where we do damage, it is our responsibility to repair, to heal the world, to engage in a modern interpretation of tikkun olam, as the Jewish Mishnah instructs. God is Love, and to act from a place of Love, as we are instructed to do being made in God’s image (Gen 1:27), is to support those who are suffering.