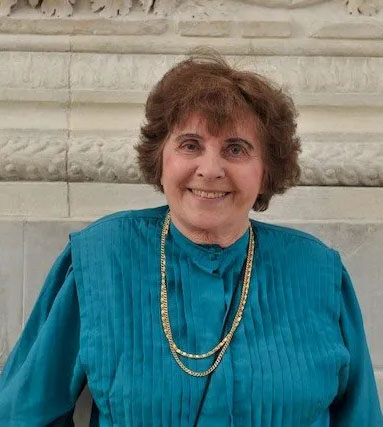 Peggy Leu Shriver, former Assistant General Secretary for Research, Evaluation and Planning at the National Councilof Churches, passed away in hospice care in Iowa on December 21, 2021. She was 90 years old.

Peggy married former Union President Donald W. Shriver, Jr. on August 9, 1953. At the time of his death in 2021, they were approaching their 68th wedding anniversary.

“Peggy’s desire was always to be back in Iowa once Don was no longer with us,” a close family friend, John Delfs, MD, wrote the day after her death. “Over the past months, she has been well-cared-for at a lovely nursing home near [her son] Timothy’s family.

An accomplished lay administrator, Peggy held positions in research, evaluation and planning in both the former Presbyterian Church, U.S. and the national offices and the National Council of Churches, where she was Assistant General Secretary from 1976 to 1989.

She served on the Board of Directors of Christianity and Crisis 1977 – 1990, and also at the Center for Theology and Public Policy in Washington, DC, for a number of years.

She was involved in numerous social justice issues locally and nationally. In 1979 she traveled as a Delegate to the World Council Churches Faith, Science and Future Consultation; and in 1980 as a member of an interreligious delegation to Romania, Appeal to Conscience Foundation.

On May 13, 1991, Peggy and her husband, Don., were jointly awarded the Union Medal, the Seminary’s highest honor, on “Don’s Day,” a tribute to his16-year tenure as Union’s President. Don stepped down as President at the end of the Spring Semester, and the two took a well-deserved, year-long sabbatical.

Peggy was a ubiquitous presence on the Union campus. As Assistant General Secretary of the National Council of Churches, Peggy worked closely with Union while Don served as President. Together they helped shape the broader church’s witness on issues from the Vietnam War to economic and environmental justice, among others.

The Union Medal citation read in part, “Don and Peggy, as sacred partners in marriage and in ministry, you have demonstrated unwavering faithfulness to Union in plenty and in want, in joy and in sorrow, and in concord and in discord, for these past 16 years.  For embodying the Seminary’s mission in the world, we are truly grateful and are proud to award you our highest public honor, The Union Medal.”

“Peggy was a force of nature who had tremendous impact at Union, in religious and theological leadership spaces and nationally,” said Rev. Dr. Serene Jones, President of Union Theological Seminary. “I am very grateful for her many contributions to the Union community which have a lasting impact today. She will be sorely missed.”

Prior to coming to Union, Peggy was an executive in the office of review and evaluation at the General Assembly of the Presbyterian Church USA in Atlanta, GA. After returning from her sabbatical, she became staff associate for professional church leadership, again at the National Council Churches.

Peggy Shriver wrote and published several books of poetry, among them, The Dancers of Riverside Park and Other Poems (2001); and Pinches of Salt: Spiritual Seasonings (1990), in which she wrote about a broad range of human relationships and the search for God moving within those relationships. Her husband was in the habit of reading her poems aloud, usually remarking at the end, “I love you, Peggy Shriver.”

Among her other published works were, The Bible Vote: Religion and the New Right and The Divided Church: Moving Liberals & Conservatives from Diatribe to Dialogue.  She and Don also co-authored articles together on various topics.

Born on July 23, 1931, in Muscatine, Iowa, the United States, the daughter of George Chester and Zelda Marguerita (Wunder) Leu, Peggy attended Central College in Pella, IA, where she graduated with a bachelor degree in 1953. She was awarded the HHD (honorary) by Central College in 1979.

In the days after her death, her son Timothy and daughter Lionel remember their mother Peggy as “an articulate person with a perceptive intellect and a killer smile to boot. We can all take comfort in the fact that both our parents lived exactly the lives they wanted to.”

Peggy and Don were members of The Riverside Church, the towering Baptist and Congregationalist church in the Morningside Heights neighborhood of Manhattan.

The couple were predeceased by their son Gregory.