Nathan Sheppard is a U.S. Army Veteran and a second year Master of Divinity student at Union Theological Seminary. Concentrating in Buddhism and Interreligious Engagement, Nathan’s studies at Union are pointing him toward a career in military chaplaincy. Nathan generously offered his time (during midterm season, nonetheless!) to talk with us about his military service, his studies at Union, and his journey to become a chaplain. 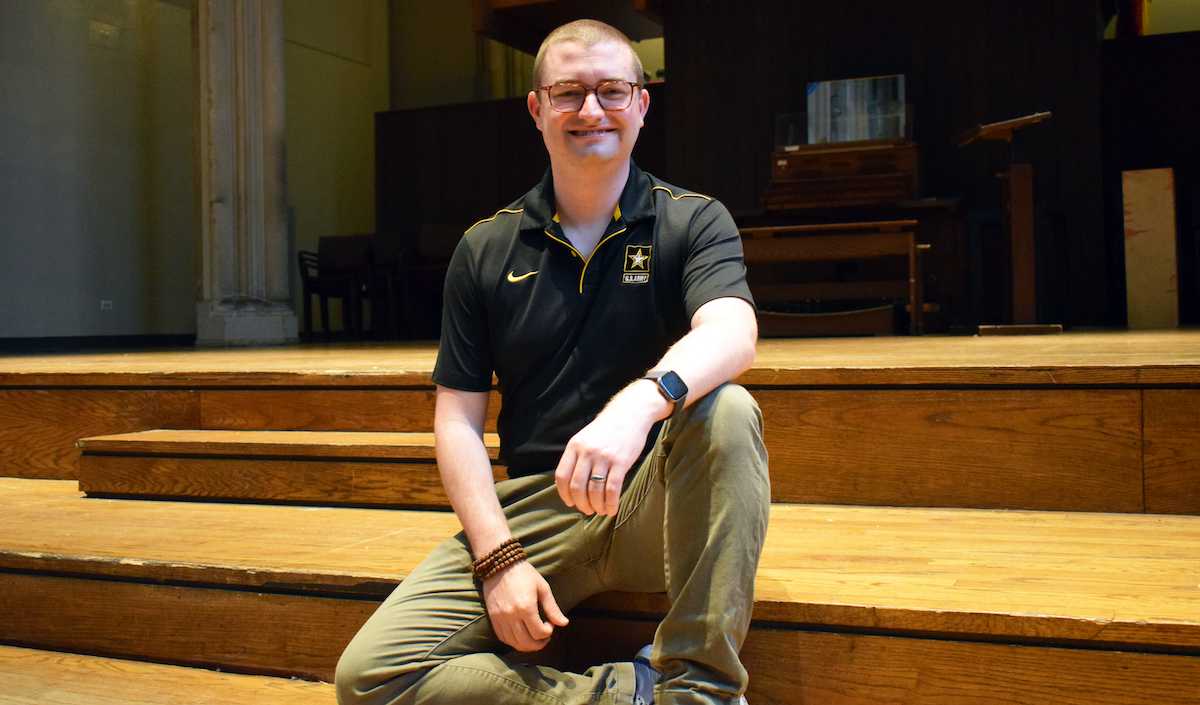 Nathan, thank you so much for taking the time to speak with us in observance of Veteran’s Day on November 11th. To start, can you tell us about your time serving in the U.S. Army and how that led you to pursue a career in military chaplaincy?

I am a classically trained musician, and I was a trumpet player my entire military career where I was active-duty for seven years.

One big aspect of being a trumpet player in the military is that we are often tasked with rendering honors at military funerals. I was stationed at Fort Bliss for a while, where we provided support for Fort Bliss National Cemetery. While I was there, I performed several hundred military funerals for all branches of the military, which was an incredibly moving experience to be a part of. Then, at one point during my service, I was deployed to Iraq. While I was there, I was separated from my unit and sent out on my own to play a memorial service for a soldier who had just died in the field days before. They brought in a bunch of chaplains to provide support for this time of crisis, and this was my first major interaction with Army chaplains. This memorial service was also the first time I performed Taps for people for whom the loss was so fresh. Many of the soldiers there had known this person for years—one of the soldiers in attendance was the fallen soldier’s best friend. Being up close and personal with this loss really gave me a different perspective on the impact that these services have and the grief that is experienced. This was a major contributing factor in my decision to pursue military chaplaincy.

One of the reasons I never really interacted with Army chaplains before this was I didn’t think that there were any Buddhist chaplains in the Army, although I eventually found that there were. Part of my motivation for becoming a chaplain is having been a soldier in a minority religion and experiencing a perceived lack of religious support. I want to be a part of making sure that other soldiers don’t go through that as well.

Another contributing factor in deciding to change my career was, as my Buddhist practice deepend, I began to seriously consider how to live the Buddhist ideal of Right Livelihood and follow the precepts against killing, while still serving in the military.

I have a love-hate relationship with the military, like everybody who’s ever been in it. But part of the job is being prepared to go to war and kill, and I started to feel that that’s not something I would be okay with doing. One of the beautiful things about the chaplain corps is that chaplains are noncombatants, so that’s a way I can still live out my Buddhist faith—a way I can still serve and not have to compromise my morals.

How and why did you decide to come to Union to embark on this career change?

Union is one of just a few places where you can get a Master of Divinity in Buddhism. After weighing my options, I decided on Union primarily because of its location as a Christian seminary. I felt that I would be doing myself and my soldiers a disservice if I did not give myself a solid grounding in Christianity, since that is the dominant religion here in America.

I was raised in a conservative Christian background in a small town in the South, and I had somewhat of a contentious relationship with Christanity and organized religion in general for many years. One of my goals here at Union is to learn new perspectives on Christanity in the hopes of healing that relationship. Now, learning new ways of looking at Christanity and learning about interreligious engagement is really helping me to understand my own Buddhist faith in different ways, and it’s also helping me to get a better picture of how people are in the world.

That is so wonderful. And how has your time been at Union so far?

I can honestly say that every single class I have taken here has further confirmed that I made the right choice and that this is where I am meant to be. I’ve loved all of my classes, professors, and classmates. One thing I particularly enjoyed was my first semester taking Global Buddhist Histories with Dr. Simran Jeet Singh. As I mentioned, I am a classically trained musician, so that class was the first time I’d really been exposed to postcolonial theory—and it just blew my mind open.

And, Professor Greg Snyder is one of the best professors I’ve ever had, at any school, in any discipline, and Peace Twesigye, who runs the program, is incredible. We have a weekly time for the Buddhism and Interreligious Engagement (BIE) community to come together and meditate, and that’s been incredibly supportive for both my academic career and spiritual practice. It really helps to forge a sense of community amongst the BIE cohort. I’m really appreciative to both of them for all that they do for us in this program.

A Buddhist military chaplain does the same thing that any military chaplain does. And chaplains do so many things! Mainly, chaplains provide religious services for those of their own faith or denomination, provide spiritual support for all soldiers and families in their unit, and serve as advisors to their commanders on all things religious, moral, and ethical.

As a Buddhist, how does Buddhism inform your ethos as a military chaplain?

In Buddhism there is a concept of a bodhisattva, which is a being of great compassion whose main drive is to relieve suffering. And there is a lot of suffering in the military. There is suffering that everybody experiences just by virtue of being human and being alive. There is suffering involved in going to war. And then there is a lot of suffering that happens that is unique to life in the military. My hope in becoming a Buddhist chaplain is that I see my role as helping to relieve that suffering.

That is beautiful. As you know, Union’s tagline is “Where faith and scholarship meet to reimagine the work of justice.” So my final question for you is, how do you see military chaplaincy as work that advances social justice?

If you look at the makeup of the U.S. military you’ll see that especially in the enlisted ranks, people of color and low-income people are overrepresented. A lot of people join the military specifically for benefits to pay for college because that’s the only way they can afford to go to school. And so you see a lot of social justice issues that Union is working on in the civilian world also present in military populations. Being there to support people in that setting is a very important part of the social justice work that we need to be doing. 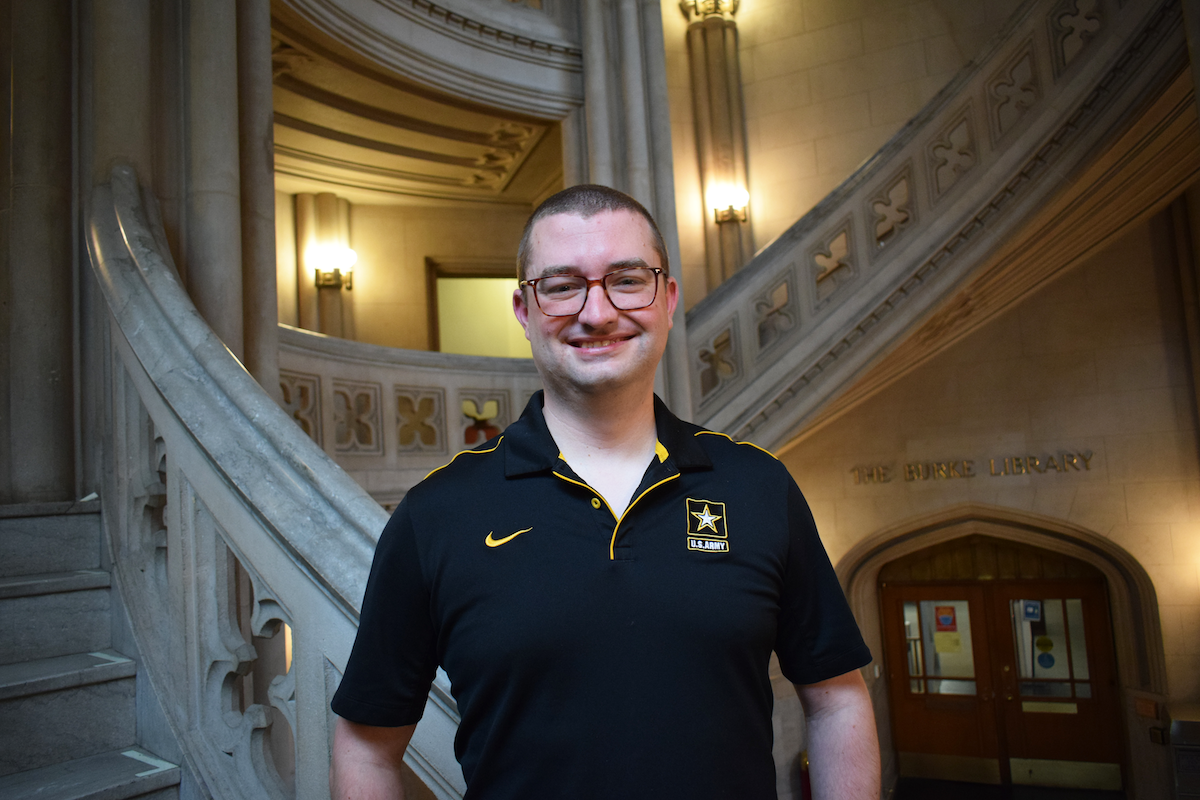