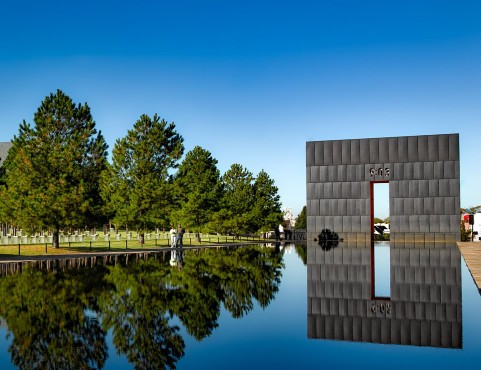 Twenty-five years ago, Oklahoma City was changed forever. On April 19, 1995, I was teaching a systematic theology course at Yale when my lecturing was interrupted by a colleague who asked me to come to the hall. She asked me if my family was alright. “Why?” I asked. “Someone has blown up a big Federal building in the middle of Oklahoma City.” My mind went blank. Then panic poured in. My grandfather and brother-in-law and many childhood friends worked in or near that building. From the distance of New Haven, I struggled to find out more. As the fog of the bomb cleared, I learned my grandfather was safe but my brother-in-law was wounded. He had been thrown through the window of the YMCA where we would later watch the bodies of small children from a day care being removed from the rubble. As a native Oklahoman, this act of domestic terrorism hit close to home. The grief of the days and years that followed still lingers with me, as do memories of the courageous people who, without thought for fame or glory, rushed in to save lives and to bring hope to a city that refused to be broken. Union Trustee Cliff Hudson, also an Oklahoman, reminds us in his reflection below of both the pain of loss and the amazing power of human compassion. In commemorating that day, we are offered fresh glimpses of the courage, resilience, and hope that mark moments of tragedy and trauma. – President Serene Jones

By Clifford Hudson, Union Board of Trustees

On April 19, 1995, nine days into my new position as CEO of the Oklahoma City-based company Sonic Corp., I boarded a morning bus with fellow officers to go to an out-of-town site for a three-day management retreat. We were not gone long before word came of some serious mishap near our company offices; employees reported some kind of explosion nearby that had rocked our 15-story headquarters, five blocks from the Alfred P. Murrah Federal Building. Our bus reversed course.

“I don’t know what has happened, but it is bad“ were the words I heard from my wife’s shaken voice when I reached her via cell telephone at our home, barely a mile north of the bombsite.

And bad it was.

Timothy McVeigh had shocked a sleepy city and awakened a naive nation with his bombing of the Murrah Building in downtown Oklahoma City. The coverage then and details of the event publicized since then have been extensive. My thought today, on this 25th anniversary of an event that might otherwise represent some of the worst characteristics of humanity, is to offer a personal recollection of individual actions, large and small, that not only reflect exceptional compassion, but also evidence the opportunity for contribution to goodness that is within virtually all of us.

One of our neighbors shared the lap pool with me at the YMCA across from the Murrah building; we had been swimming there for years. Andy also happened to be an MD. Immediately after the bombing, and at extraordinary risk to his personal safety, he entered the bombing site and, finding a woman whose leg has been crushed by a fallen wall and otherwise unable to get out of the building, he amputated her damaged leg and helped remove her from the building. For this, he was later honored at a White House ceremony.

And the woman who trimmed my hair volunteered evenings at our convention center where rescue workers slept when they were not at the bomb site. Her contribution? She massaged their sore and swollen feet.

For two weeks after the blast, my company fed rescue workers and other members of the public at the bombing site. In 2–3 weeks, we served about 5,000 meals, at the bomb site and a second site, three miles north.

The second site was a gathering place for members of families who were missing a loved one, believed still in the Murrah Building. The Federal Emergency Management Agency had very different resources in 1995. Those resources almost certainly did not include onsite data management to track these missing people.

My company’s CFO, who then served with the local affiliate of the American Red Cross, missed not a beat in ensuring our company supplied numerous desk top computers, including hardware, software and staffing at this second site. Our employees met with family members for upwards of three weeks, receiving details of missing family members and storing those details in our donated computers. For this, our company was later honored by the national office of the American Red Cross.

This second site was virtually in my late mother‘s backyard, on the First Christian Church grounds that adjoined her property. My family had been familiar with First Christian Church for years, though we had never attended there. Architecturally, it is a fascinating church, very modern and unique. At the time of the bombing, our family attended Westminster Presbyterian Church, another mile north, and still does.

Local ministers and counselors met with family members and relief workers at First Christian Church to attempt to work through their grief. My mother, who was a psychologist, donated 3 to 4 weeks of her time meeting with families of victims who could not be found at the bombing site. Though challenging for my mother, her volunteer effort was offered intuitively and completely.

This type of individual compassionate service was repeated over and over again by members of our community, from our mayor, firemen, and numerous service groups, to so many individual efforts never recognized, never rewarded, and none ever expected. These acts represented, in my view of this world, the potential goodness that is within virtually all of us.

On this 25th anniversary of the Oklahoma City bombing, I prefer to recall this widespread and compassionate call to service, and know it was a personal high point for many, that moment called toward serving others’ greater needs.

And, at this moment, in America, our need to believe in the powerful potential of individual effort toward attacking greater needs is as real as real gets.