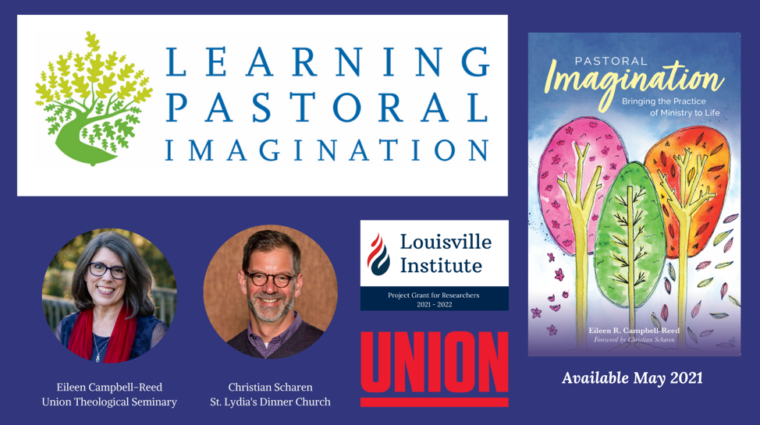 Campbell-Reed and Scharen will continue an unprecedented national,
ecumenical and longitudinal study of ministers in US begun in 2009

NEW YORK, NY – The Learning Pastoral Imagination Project (LPI) announces new funding from the Louisville Institute. The $30,000 Research Grant supports an unprecedented national, ecumenical and longitudinal study of pastoral ministry in the United States. Since 2009 the LPI study has been following a cohort of 50 graduates from ten seminaries into their careers as ministers, pastors, priests, chaplains and community/religious leaders.

Project co-directors, Eileen Campbell-Reed and Christian Scharen, will conduct a fourth round of qualitative interviews with ministers who reach the ten-year mark past seminary graduation. The study focuses on how the embodied, relational, spiritual and integrative practice of ministry is learned across time.

“The ten-year mark is crucial for learning how participants are evolving and growing in their ministry leadership, especially in this time of changed religious practice due to the global pandemic.” says Scharen, pastor of St. Lydia’s Dinner Church in Brooklyn, New York. “Furthermore, the intentionally diverse cohort of participants should tell us about the pandemic of racial injustice in this nation, and how communities of faith are negotiating the stark divides.”

“I am thrilled to gather our study participants once again,” says Campbell-Reed, visiting associate professor of pastoral theology and care at Union Theological Seminary in the City of New York. “Each day-long interview, even in Zoom, is like stepping onto holy ground.”

All 2021-22 study interviews will be virtual, reflecting how the global Coronavirus pandemic necessitated and normalized digital connections.

Union Theological Seminary will be home base for this phase of the LPI Study. Union’s vice president for academic affairs and dean, Pamela Cooper-White says, “The LPI Project is the first ethnographic study of what ministers really do, how they feel about it, and how they keep going with renewed energy and creativity.” In the study Cooper-White observes that Campbell-Reed and Scharen are learning what ministers “need to remain fresh and vibrant in such difficult times.”

Scores of theological educators, seminaries and divinity schools are making use of Scharen and Campbell-Reed’s 2016 Learning Pastoral Imagination: A Five-Year Report on How New Ministers Learn in Practice. The study presents findings from the first three rounds of interviewing.

The concept “pastoral imagination,” was coined in the late 1990s by Craig Dykstra. At the time Dykstra, a Christian educator and vice president of religion for the Lilly Endowment, began articulating and cataloging the special kind of intelligence required by and fostered in pastoral work. As Dykstra likes to observe, “a good pastor at work is a beautiful thing to see.”

Matthew Floding, Director of Ministerial Formation, at Duke Divinity School, and editor of Reflective Practice, says, “those of us committed to the wholistic formation of persons in faith and for ministry want to understand pastoral imagination. For many of us Christian Scharen and Eileen Campbell-Reed have proven to be our best and most reliable teachers and source of information.”

Floding says, “Most theological field educators are not only aware of this important research but wrestle with its implications for structuring field education opportunities and incorporate its vocabulary into their programs.” At Duke says Floding, not only students benefit from the LPI study findings, but he also “trains and supports our supervisor-mentors with a workshop titled ‘Leadership Formation and Pastoral Imagination.’”

At City Seminary of New York, the approach to theological education, “involves walking alongside and learning with and from pastors and ministry leaders in community in the city over time,” according to the school’s provost, Maria Liu Wong. She says, “The LPI study helps us to see and hear in different ways what this looks like and how it is transformative. The study sheds light on how we might continue to grow and deepen our practice of becoming wise together.”

In May Campbell-Reed will publish the first book from the LPI study, Pastoral Imagination: Bringing the Practice of Ministry to Life. In late 2018 she launched Three Minute Ministry Mentor (3MMM), and as host, Campbell-Reed shares LPI study findings, stories and wisdom.

“Every episode of 3MMM includes big ministry topics, stories to unpack them, supportive resources, and questions for reflection,” says Campbell-Reed. Pastoral Imagination brings together LPI study findings with the structure of 3MMM. The book can be pre-ordered atFortress Press, Amazon and Indie Bound.

About Pastoral Imagination, Eric Barreto, Weyerhaeuser Associate Professor of New Testament, Princeton Theological Seminary says it is “a treasure trove of insight, learning, and wisdom in which you can rediscover the imagination, hope, and grace that nurtures a lifetime of ministry.”

“The world cries out for justice and healing,” says Serene Jones, president of Union Theological Seminary. “It desperately needs pastors, chaplains, and activists who embody a vibrant pastoral imagination. And Eileen Campbell-Reed’s new book is just what we need in theological

education to form religious leaders and public theologians who can speak and act with a robust pastoral imagination, bringing leadership and care to the demanding situations of life.”

Participants in the LPI study live in all regions of the U.S. and include people who identify as: