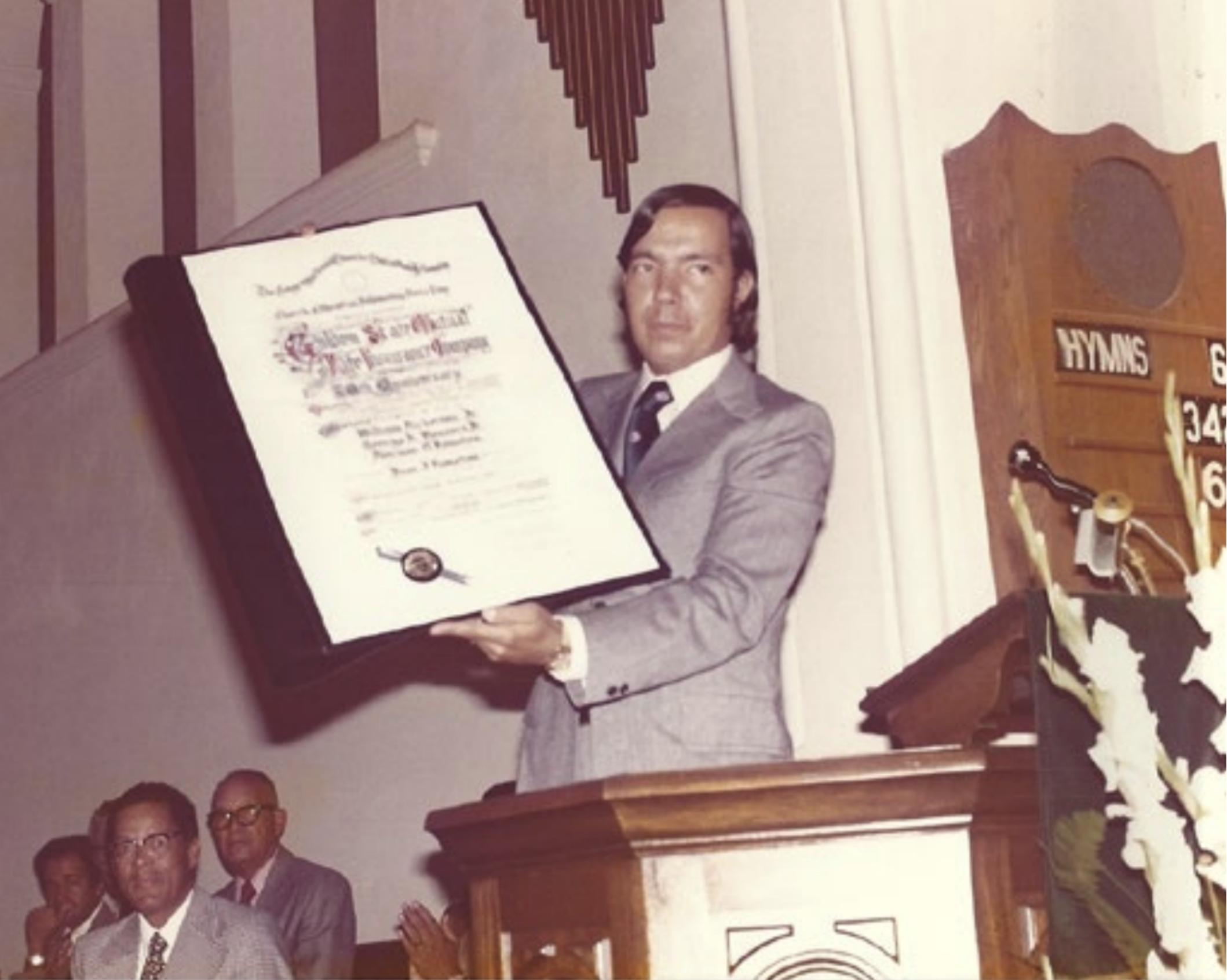 Rev. Luther Holland Jr. ’70 is a retired United Church of Christ (UCC) pastor and freedom fighter. He was active during the civil rights movement, attending the March on Washington as a youth leader of the Jamaica, N.Y., NAACP, and he spent his 20th birthday walking across the Edmund Pettis Bridge in Selma, Al., with Rev. Dr. Martin Luther King, Jr. He was trained in nonviolent demonstration tactics by Andrew Young, C.T. Vivian, Ralph D. Abernathy and Jesse Jackson as a member of the Southern Christian Leadership Conference (SCLC) and participated in several lunch counter sit-ins in North Carolina and other southern states. This year, Rev. Holland celebrates 50 years as a Union alum.

Personal photo circa 1970s provided by Luther HollandTell us about your time at Union.
The positives at Union, for me, were having courses on Jeremiah and Old Testament by Samuel Terrien, Black Church History with Lawrence Jones, Sociology of Religion with C. Eric Lincoln, and being in the first lecture class with James Hal Cone and reviewing his first book, A Black Theology of Liberation. Also, several other professors, like Roger Shinn and Robert Handy. They were great teachers and some became great colleagues, like Lincoln, Jones, Cone and Shinn.

In addition to this being your 50th reunion year, you are also celebrating your 50th year of ordination. What are some of your memories or milestones from your time in the UCC?
Since my ordination, I have served several UCC churches and two new church starts. I served on the conference staff of two of the largest UCC conferences as Minister for Church in the World, and Affirmative Action Officer. In addition, I am a founding member of Ministers for Racial, Social, and Economic Justice, and United Black Christians in the UCC. I celebrate the UCC for its historical involvement in the racial, social and economic justice battles in America.

How has your work in the civil rights movement and the UCC informed what you think about our current racial justice movement of 2020?
During my ministerial time, I have watched the racial justice emphasis defocus in the UCC to a human sexual justice focus. I was on the Council for Church and Ministry board of directors of the National UCC when we voted to ordain William Johnson as the first openly gay man in 1973. The UCC was very involved in two civil rights movements in this nation I participated in: the civil rightsmovement of the ’50s, ’60s and ’70s, and then I supported the National Farm Worker Ministry movement under Cesar Chavez. I was a member of the Commission for Racial Justice’s educational team around the Wilmington Ten movement and Benjamin Chavis. Today the UCC has moved to a more inclusive justice focus, which includes LGBTQIA focus. This has caused tension throughout the denomination, but it is a justice movement that must be addressed as well as Black Lives Matter of 2020. Can I say, that LGBTQIA Lives Matter as well. I pray God grants us the ability to realize the actualization of what God has for America with Black Lives Matter and LGBTQIA Lives Matter, and one day I will see the Beloved Community where justice, equality and freedom are the cornerstones of a new America.