Walking the Path of Compassion

Sister Chan Khong, Elder nun of the International Plum Village Sangha and monastic disciple of the late Zen master Thích Nhất Hạnh, came to Union Theological Seminary on August 30th to speak with students and faculty from the Buddhism & Interreligious Engagement program. In an afternoon filled with storytelling, wisdom, and song, Sister Chan Khong spoke to the power of mindfulness, the importance of humanitarian work, and how she has braved immense challenges with a heart of compassion.

“I would like to start with a song,” Sister Chan Khong began as she opened her address to Union’s Buddhism & Interreligious Engagement department. “I smile to the star that still shines in the sky, to the sun that slowly guides us out of the night,” she sang. “I smile to the world and the world smiles to me.”  Upon finishing the song, Sister Chan Khong began to tell stories from her work during the Vietnam War—how she helped to build the school of social work, how they brought medical aid to remote communities, took in children in need, and how they sought to cultivate forgiveness in the face of horrific brutality. “Our enemies are not your enemies,” she said, referencing chants that her and her students would sing. “Our enemies are misunderstanding. Our enemies are in each of us, not outside.” In this way, Sister Chan Khong’s spiritual practice was made clear as foundational to her activism.

“The compassion in you is God in you. Is Jesus in you. Is Buddha in you,” Sister Chan Khong shared. Her respect for pluralism emanated throughout the hour-long event, as she continued to draw parallels between Jesus, Buddha, and the goodness in all beings. For the last thirty minutes of the session, Sister Chan Khong answered audience questions that ranged from maintaining mindfulness amidst difficulty, overcoming isolation, and finding empathy for those who have done harm. With clarity and conviction, Sister Chan Khong’s anecdotes and teachings were a testimony to a life committed to the dharma. For the Buddhism & Interreligious Engagement program at Union, Sister Chan Khong’s presence was an exceptional start to the school year.

“It is a true honor and gift that Sister Chan Khong took the time to visit Union and support our Buddhist students here with her teachings,” Kosen Greg Snyder reflected. “Her life of service to the Buddhadharma and to those suffering in the world throughout the war in Vietnam and since is an inspiration and model for us all. We deeply value her as one of the great cedars of our Buddhist community here at Union as well.”

“It was such an honor to host Sister Chan Khong at Union, and I am so very grateful that Union’s Buddhism and Interreligious Engagement Program brought Sister Chan here to us,” said Union Theological Seminary President Serene Jones. “Her incredible life story and her call for empathy and compassion resonated deeply with myself and all present at the gathering. We are indebted to her for this incredible, enlightening time with us.” 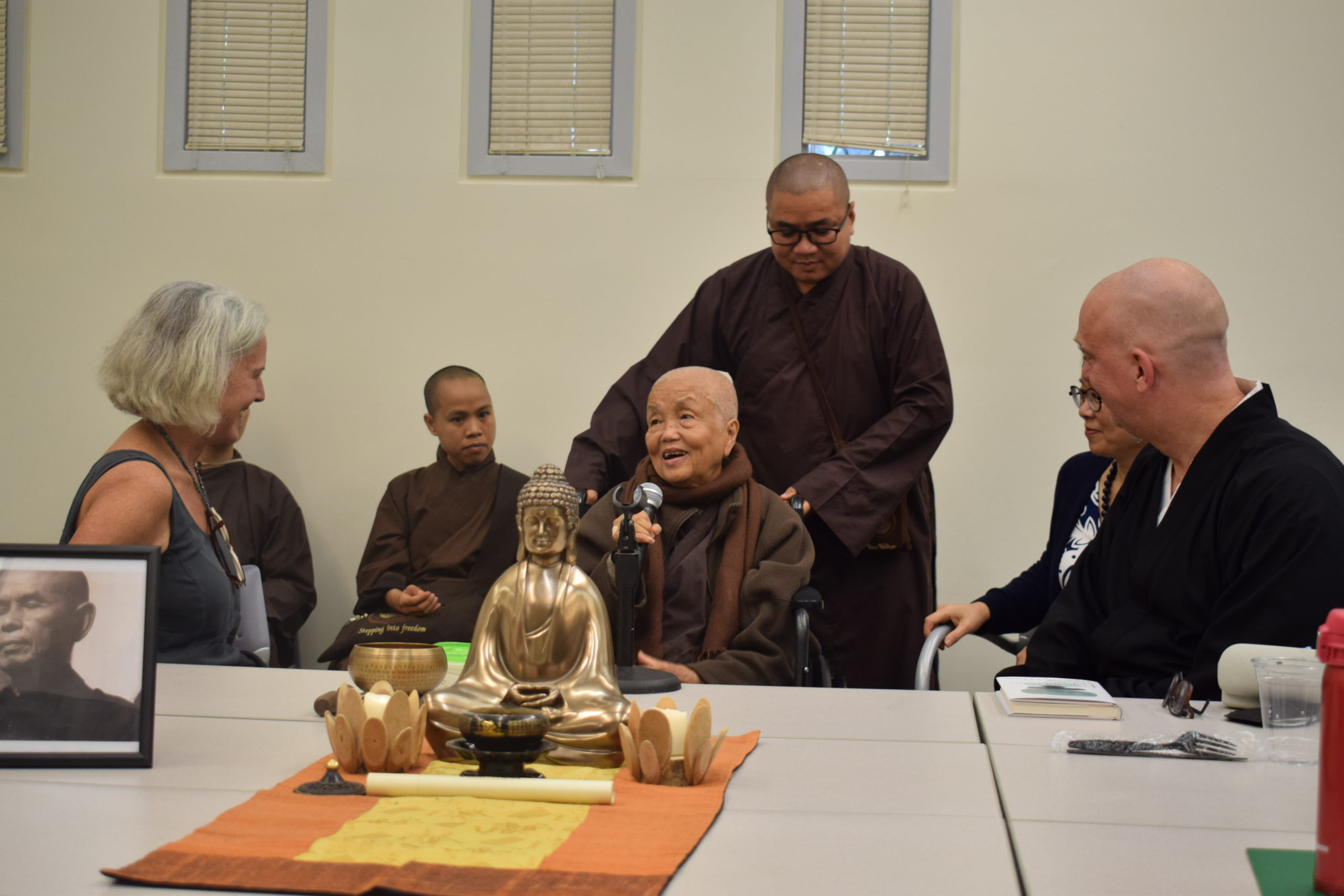 Sister Chan Khong is an activist, teacher, and Elder nun at Plum Village International Sangha. She is the author of her autobiography, Learning True Love: Practicing Buddhism in a Time of War (2007) as well as Beginning Anew: Four Steps to Restoring Communication (2014) and Deep Relaxation: Coming Home to Your Body (2013). The Buddhism and Interreligious Engagement concentration within the Master of Divinity prepares chaplains, clergy, and other individuals for diverse leadership roles working with and in Buddhist communities as well as bringing Buddhist practices and principles to those who may not identify as Buddhist. The Thích Nhất Hạnh Program for Engaged Buddhism promotes academic and public education aimed at cultivating diverse Buddhist responses to the pressing social issues of our time.