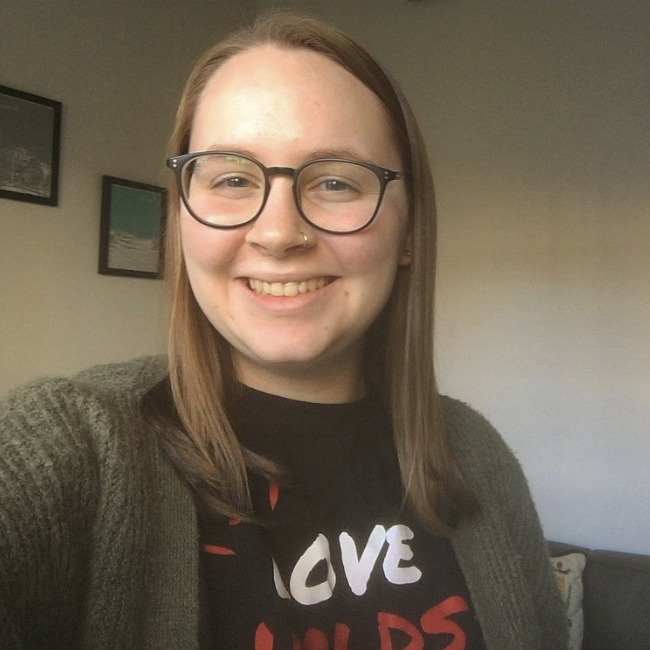 Emma, could you share what you were doing before coming to Union?

I graduated from William Paterson University in May of 2020, where I studied psychology and public health. During undergrad, I worked part-time at an orthodontist’s office while living at home in Northern New Jersey, so this is actually my first time living away from home. I have four younger siblings and there’s a considerable age gap between us, so I chose to stay at home so I could see them grow up for another few years.

What made you think about coming to seminary?

I started planning on going to seminary when I was about 16, which is when I first began to feel the pull. I was leading a middle school youth group at my church one night when it hit me: I realized I could become a pastor. I helped out with a youth group because I wanted to make sure that none of the kids ever felt alone, and at that moment, I realized that becoming a pastor was the perfect way to devote my life to making people feel less alone. I had always wanted to care for people in my career, but before that moment I had never known what form my career would take. After realizing that I could become a pastor, everything made sense. I knew I could go to seminary with any undergraduate degree, so I initially started off in Biology which was my favorite topic in high school. I happened to take a psychology class with a professor who was Catholic and very progressive, and I loved how he brought those two identities together. That experience sparked my interest in psychology and I wanted to learn more about people, their behavior, and how we interact with one another.

For my thesis, I did a study in psychology that explored the attitudes of religious college students towards LGBTQIA issues. That was where I started to bring together my passion for activism work in the LGBTQIA community with my interests in religion and psychology.

Were you coming from a particular faith background?

My parents were both born in Germany and come from a Protestant Christian background, but growing up we didn’t go to Church much. We were vaguely Christian, but what I really remember is my dad praying with us in German every night before bed. We didn’t go to church very often, mainly because I had so many younger siblings and someone would inevitably cry during the service!

We started going to church regularly when I was 13 because my parents wanted me to be confirmed, although the idea of joining a community I did not know terrified me as an introvert. It was an eight-month long process of going to classes every Sunday morning, where we read the Book of Luke and had discussions on the Bible and faith. You can become a member of the Church at any age but my parents wanted me to be confirmed in 8th grade, which is pretty customary.

My parents chose a Presbyterian Church and, over the years, I became really involved, from leading a middle school youth group to being a deacon and eventually an elder. I loved all those leadership positions and they certainly sparked my calling, but I also started to realize I was very sheltered by being tied to one Church, one denomination, and one religion. What inspired me to come to Union was a desire to be exposed to the other faith traditions and their diversity.

How did you find out about Union?

The pastor at my home church, Greg Horn, is actually the Presbyterian advisor at Union through Auburn. When I was 16 and started to feel the call, I discussed this with him and he brought me to Union a few times to walk around campus and sit in on one of his classes. Our Church interns were also Union students and I became very close to one of them. Everyone I met from Union was really awesome, and they gave me an idea of who I wanted to be as a seminarian and eventually as a pastor.

I remember the first time Pastor Horn took me to Union in 2015. It was HIV Awareness Month at the time and outside the Union entrance there was a sign that read, “We are in support of those with HIV/AIDS and we are with you.” It was so blatantly supportive and beautiful. I had never seen such a strong statement of support from a religious institution and I knew that I wanted to be at Union. My call strengthened throughout high school into college, and in my senior year I applied to Union and some other seminaries. I applied to two Presbyterian seminaries, but I realized I wanted to be around people of other traditions and backgrounds. I feel my calling is to be a hospital chaplain, which is a space where I’ll be working with people from different traditions and I want to be able to be a pastor to all of them.

What have the first couple of months at Union been like for you?

It’s a very weird time and obviously none of us expected to be in seminary this way, but so far it’s been incredible. I feel like every single week I’m unlearning so much and everything is crashing down in the best way possible. Growing up, the Bible terrified me and I never tried to read it, but now I’m taking Introduction to the Hebrew Bible with Professor Hamori and loving it. Understanding the historical context and how the writers of the Bible intended it to be engaged was helpful in dismantling how intimidating it can be to approach these sacred texts.

I’m also taking Religions in the City since learning about other traditions is a huge part of why I came to Union in the first place. I feel like the wool is being pulled back from my eyes. It’s really cool, but also sad sometimes as you wonder why it took so long for this to happen. I’m being encouraged to explore and take part in other religions and traditions which was something that was never encouraged or that I thought to do myself while growing up. The other thing is that the students are incredible and I wish I could spend more time with them. There’s so much support and love from everyone and it’s the little ways we connect through Facebook or Slack that I love. I also love our willingness to call out the ways we fall short of our commitments to justice instead of just letting that slide; it’s been really beautiful.

Has there been something you’re unlearning that’s given you more space to grow?

This week in Religions in the City we’re learning about Islam. I am embarrassed to say that I  know very little about it other than its emphasis on modesty, which many people use to argue that there is no gender equality within Islam. While doing the readings on Islam, I was struck by how progressive it is. For example, the first convert to Islam was the Prophet Muhammad’s wife, a successful businesswoman who supported him as he got this religion off the ground. She’s considered incredibly important and an exemplar within the tradition. I also learned about how modesty is encouraged for all genders and not just women as we’re typically shown in the media.

I have experienced a lot of unlearning especially around the Bible. While reading Genesis, Dr. Hamori shared that eating from the Tree of Knowledge in the Garden of Eden wasn’t a sin, but was actually the process of humans gaining sexual knowledge and it was necessary in order for them to reproduce. It’s odd to consider how you’ve been misled by society, and possibly the spaces you grew up in, but unlearning needs to happen for growth. I feel so much growth is going to come from this time.

I think it has come down to a sense of openness. Last week in the Union Slack channel someone wrote, “Comment below with something great that happened this week.” 19 people chimed in, sharing everything from cooking fried rice for the first time to making the decision to move to a new state. There was this sense of shared excitement for every little thing happening in each of our lives. It’s harder not being with each other physically, but the little comments and conversations in the classroom and over social media have been so attentive to everyone’s needs. In addition to this, my favorite thing about Union students is that, when a mistake is made by a fellow student or the administration, these students will speak up and educate so that all are made more aware of the issues facing our society.

At the beginning of the semester in Religions of the City, we developed guidelines for our small groups. There was so much emphasis on everyone being comfortable, seen, and heard. I’ve always been someone who is incredibly quiet and in college it was really difficult for me to participate in class. Yet the sense of comfort I’ve experienced at Union is unlike any other institution I’ve attended. So much of that is because of how cared for I feel here. It’s a nurturing environment where students and professors look out for each other, checking in and making sure everybody’s needs are heard.