What were you doing before coming to Union?

Before coming to Union I was working in child-care, something I’d been doing for about five years. I worked primarily with children who had experienced trauma or families that were interracial. This looked like working alongside biracial children and helping them understand their identity, its complexities, and nuances as they realize “I’m different from my classmates.”

When did you begin thinking about coming to Union?

Union was always a distant, far-off dream. I have my Bachelor’s in Judaic Studies and was interested in exploring systemic oppression within a religious context – how does it impact generational communities, the way we gather and form our relationships? I was interested in exploring that from a holistic perspective, one that would allow me to incorporate other traditions and the meeting of intersecting identities.

I’m currently in the dual-degree program between Union and Silberman School of Social Work, and it’s been amazing! After some difficult experiences with my past church, I realized churches and religious communities need professionals trained in how to care for people. Some of the theology we have is problematic and violent, at least from the Evangelical tradition I was coming from, and mimics so much of the language of systemic oppression.

None of my pastors were ordained or attended divinity schools. They attended Bible college but had no credentials or qualifications, and that became my prime concern. I understand the importance of experience, but expertise was something that I found lacking. I came to Union because I wanted to bring experiences informed by expertise in order to better care for people.

How have the first couple of months at Union been for you? 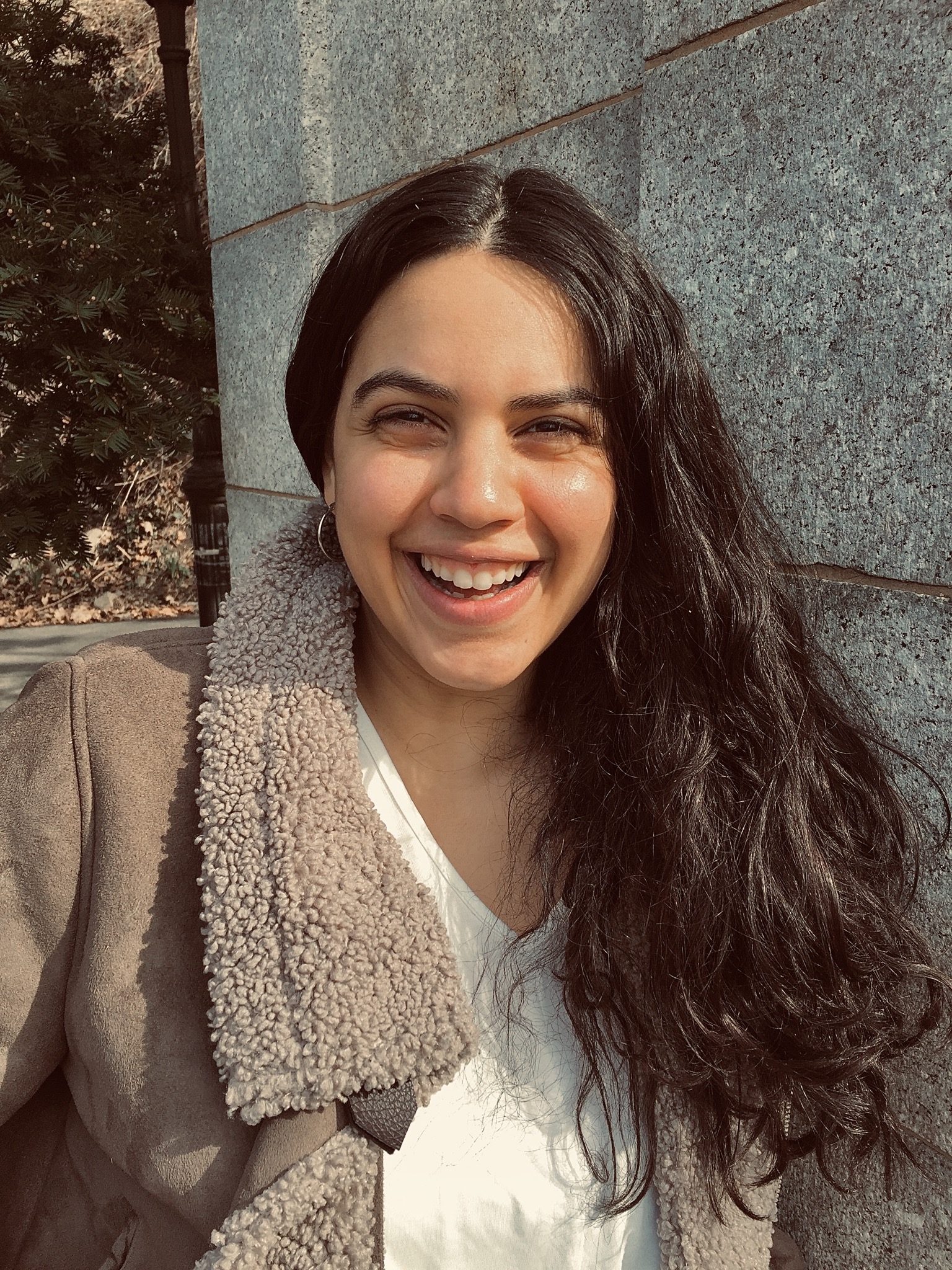 I feel like there are two levels to Union. There’s Union as an institution, and then there’s kind of an underground Union which I’m beginning to discover. As far as Union as an institution, there’s a use of language which can be very exclusionary. I’ve sat with peers and they share, “I feel like I’ve never been so dumb or incompetent.” They understand the concepts of these theologians, but the language used to explain it has been a struggle.

So there’s been a lot of gathering with other students and asking how those of us with different identities can yield those privileges. For example, there were a group of non-Christian students in my class who were struggling with the Christian-centric language of grace and sin. I come from a Christian tradition so I lose nothing by unmuting myself and asking, “Hey professor, could you explain what that concept or word means because not all of us here are Christian.” So it’s not about de-centering, but pointing out the ways language is a barrier whether in readings or the classroom.

It’s been lots of studying, late nights, and early mornings.

Choosing graduate school in theology amidst a pandemic and uprisings, what was that decision-making process like for you?

I’ve made questionable choices before, so it’s not lost on me!

There’s something special that speaks to grit and resilience. Saying all of this is going on in the world, yet I continue to see the importance of how this shapes our world and will continue to do so. I think for me coming to Union, especially at a time like this, is there was so much delay in getting here.

I would think to myself, “I’m too brown. I’m too poor. I’m too ill-equipped. I don’t know anyone else that’s done this before or anyone in my immediate family who’s gone to graduate school.” So for me, it was a lot of reclaiming. Reclaiming that I belong here, in this field. Not just me personally, but my ancestors.

My ancestors were theologians, healers, community gatherers, and activists. They weren’t always allowed to express and lay claim to that identity. So for me, in the midst of COVID-19, it was an instance of saying I still belong here regardless of the chaos going on in the world. Regardless of what else is coming to wipe us all out – we are here, we are still here, we have always been here, and we will continue to be here. It takes a little extra fight sometimes, but we’re still here.

What classes have been shaping you this semester?

“Religions in the City ” with Dr. Rhodes, even though it’s really kicking my ass. That’s the class I’ve been most expanded and challenged in. There’s just stretching that happens there.

She invites you to really locate yourself and pinpoint the assumptions you bring to a text and faith tradition. There’s no hiding the intentions or preconceived notions you have about theology or your place in it. The class is illuminating and challenging, beautiful yet messy; that class is really at the heart of what Union is. She invites you into the chaotic messy space of uncovering the biases you hold, theologies that might be harmful, and the assumptions we hold of ourselves and others. She does it in a way that’s compassionate, but accountable.

I’ve also been enjoying Dr. Hamori’s “Old Testament”. The way she approaches scripture makes me wish she had taught my Sunday school class! There’s a lightheartedness to her presentation that’s really refreshing.

Has there been something from “Religions in the City” that has been stretching you recently?

Last week we touched on the reality of boundaries, asking what do we consider religion and who gets to determine that. One assignment is doing site visits to religious spaces, and a question we’re asked to reflect on is what our intentions are when we visit – is the ritual diminished if we don’t believe what the ritual stands for? It’s this process of seeing what negotiations you’re willing to partake in to be a part of that experience – where is the line, is there a line, why is that line there?

Dr. Pak and Kosen Snyder visited our class and spoke about their experiences with inter-religious engagement. It was really beautiful and weirdly emotional hearing people reconcile and negotiate within themselves and with others. It’s cool to see folks who have wrestled, and continue to wrestle, while reflecting on what that looks like within my own life.

I’m curious, does your work with children and identity-formation come to mind as you think about boundaries and negotiation?

100 percent. I really loved working with young children, around six and under. There’s this sense of freedom and a lack of boundaries within them. If they witness someone else do a behavior or ritual, they are so committed to putting themselves in that place, whereas adults inhibit themselves by the narratives they have.

I see freedom in children in a way that I don’t often see in adults. I miss the playful, silly, flexible boundaries of children but I’m rediscovering it in small ways at Union.

How do you bring that playfulness into classrooms, especially when academia feels so serious and fixed in its borders?

Decolonization. The process of recognizing that so much of my theology, whether forcibly through colonization or socialization, is the theology of an old, white, straight, man. That realization led to reclaiming my ancestors as theologians.

Classes here are serious. We’re talking about these abstract theologies and concepts, yet theologies are lived realities. Through learning about Latin American liberation, the Mujerista movement, Womanist movement, Black Liberation movement I’m finding spaces to see myself and people who look like me. I try really hard not to give in to imposter syndrome, which can be hard at a place like Union, but I remind myself that I’m still who I am. I’m not trying to fit a particular mold of what a theologian should look or sound like, because we’re all theologians.

Just saying to myself, I’m a theologian and I love to laugh and be playful and curious about how I’m engaging within class and with the material.

What do you say to people who think theology can only happen in these spaces?

I would say what I wish I had heard, which is that you’re already a theologian. You have the experience and something within you has already been theologizing. It was in your ancestors and it is springing out of you. You don’t need the approval of anyone to tell you differently, you know it’s there so listen to it.

Be aware that your journey might be different from other students, but don’t be afraid to name that. There’s power in naming the obstacles so others can consider the solidarity work that needs to happen. If you’re coming from poverty, name that. It isn’t a point of shame or a moral failure, it’s a structural systematic form of oppression, so name it. It says that you are fighting through it and yet you continue to be here. Own that, and when you can’t be here name that too. Say I am a theologian with crippling anxiety and depression, yet I am still here breathing life and spirit into these texts. Still interpreting what these words mean for me in this body, for people that look like me, for people who have, are and continue to be marginalized, marginalized in ways that are familiar and foreign to me.

Name it, because the more you name it the more others can find you. That’s part of the work as well, being able to find each other and seeing a little part of ourselves in someone else.

I wish someone told me how deserving I was to be in this space, as a theologian, in academia, at Union, maybe it wouldn’t have taken me so long to apply.