Can you tell me a little bit about yourself Oriana?

I’m born and raised in New York. I’m an artist, an organizer and, according to a mentor of mine, a chief trouble maker in-training. I’m also a student at Union in my first year and currently serve in the Student Senate as a first-year M.Div. representative. I am also a sister, a partial dog owner, semi-frequent yogi, runner, wannabe Floridian and anarchist.

What brings a chief trouble making anarchist to Union?

It perplexes people when I share that I am studying divinity, because they immediately think I am talking about magic (which is partially true haha) but…for me, pursuing a degree in divinity at Union compliments my social justice work and my life commitment to dismantling structural oppression in all spaces. I also genuinely feel that, becoming an ordained minister, thereby being able to wear a collar, may make it a little more difficult for the police to arrest me during direct actions? I want to be on the front lines doing work with people on the ground who are directly impacted and marginalized. I’m specifically at Union because I wanted to be in a seminary with people who shared my radical commitment to justice. 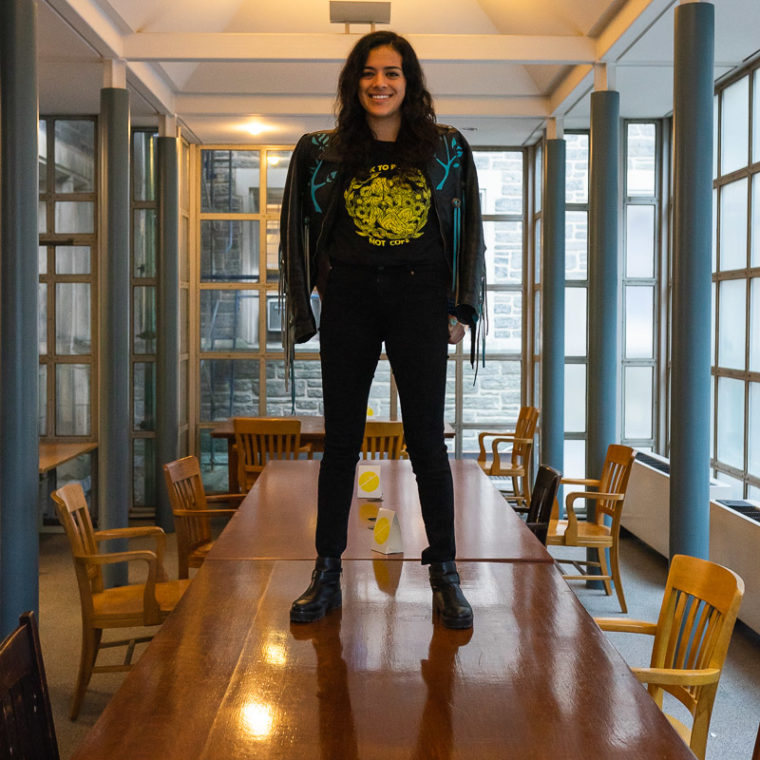 How has that study of God taken shape in your first year?

I took “Old Testament”, which I absolutely loved! I’m a Hebrew Bible nerd and if I had two lives I would do Biblical Studies as my concentration instead of Social Ethics. I have an affinity to Judaism and I’ve always been in love with the first book of the Pentateuch, Genesis – understanding it beet is partly why I am interested in taking Hebrew this summer. I plan to take a course or two at the Jewish Theological Seminary across the street as I try to discern what this interest in Judaism looks like during my time at Union. In my first semester, I also took a phenomenal class with Dr. Rhodes called Religions in the City, as well as a powerful theology and arts class with Rev. Micah from Judson Memorial Church. As an artist, I’m hungry for more work related to theology and the arts! I love acrylic painting and beadwork, and I’ve been working on a collection of paintings for the past two years on the concept of “Mother God”. This semester I decided to take a break from most of my course requirements and do more of the classes I love…I’m taking many of the “lefty” classes. I’m in an amazing class taught by Professor Jan Rehmann called Social Justice, and on the first day he asked us why we were here. My response was that I wanted to figure out who my comrades are, because in my classes focused on justice I am more clearly able to identify the people I want to build with.

What’s the journey of finding comrades been like for you at Union?

It’s been surprisingly easy. I went to a small, private, middle and high school that was similar to Union, so it feels familiar to me. I knew that Union was my place without a doubt and I didn’t apply to any other schools, though at first, I considered Yale. I came to Intersections where I met one of my absolute favorite people at Union who was my roommate for the weekend. My church, New Day, has three members whom I admire that also graduated from Union. So there was already a relationship to Union that I had outside of the institution, but one of the challenges is that there isn’t enough time in the day to build relationships with everyone. I recently started a part-time job in the Communications and Marketing Office and having a partner can feel like a full-time job at times so I’m still trying to figure out how to go deeper in building relationships with people while maintaining a work-life balance.

Where do you hope to grow while at Union?

This semester I’m taking an incredible social ethics class, which is my concentration, with Professor Azaransky. I haven’t been in a philosophy or social ethics class since 2014, so I’m trying to get a deeper sense of what social ethics means and what that looks like outside of the classroom. The one thing I’m really excited about and advocating for at Union is an anti-racist training for my first-year class. I think it would be helpful to make my fellow POC peers safer given that Union is a predominantly white institution. I’d also like to bring transformative justice work into the space, so that when low-levelharms occur there’s a procedure to address it between peers or within the institution. It’s not here yet, but I’m hoping that my growth at Union will bring more educational programming around antiracism and exploring how we can relate to one another when harm happens.

It seems like you’re coming to Union with a lot of past lives, are there any ways you see this informing your time in the classroom?

I identify first and foremost as a harm reductionist, which comes from the work I’ve done in drug policy and psychedelics. I’m an advocate of psychedelic medicine, whether for people who have experienced trauma or for people in relationships who want to deepen their connection. One of the things I want to bring to Union is more conversation around plant medicines and healing, which I know is taboo because many of these substances are still schedule 1 despite the work being done in different states to legalize them. I think it would be really powerful to have more healing groups with different affinity groups at Union. From 2017 until recently I was the director of community engagement for an organization called Psymposia, which is a media organization that covers issues on drug policy and psychedelics. My role with Psymposia focused on building community on their platform, in particular, I helped organize a series called “Psychedelic Sisters in Arms”, which explored the narratives of women who had survived sexual violence in the general “psychedelic community”. Prior to that, I was doing research in psychedelics, volunteering at the Multidisciplinary Association for Psychedelic Studies (MAPS), and this summer I briefly worked for a syringe exchange in the Bronx.

For theologians committed to justice, why should they care about psychedelics and plant-based medicines?

For me, healing is part of justice work. If we recognize that harm has taken place, whether interpersonally or structurally…there needs to be something more than addressing the harm to foster healing. That’s why reparations are so important and yet still not enough. Psychedelics and plant-based medicines are powerful tools in the process of healing, particularly for the most marginalized folks living under empire, who are underserved, underrepresented and experience the highest rates of violence. Marginalized communities already have limited access to healing spaces, so I think it’s important for folks invested in justice work to center and prioritize what nontraditional forms of healing look like for these communities. It is likely that many psychedelics such as MDMA will be legalized by 2021 and a person will likely have to pay somewhere around $5-7,000 for a session. Therefore, we know that the communities who need this form of healing the most are not going to be able to afford or access it. It’s going to take a concentrated effort from everyone…theologians, activists and politicians to recognize we need to be a part of the conversation around psychedelics, if not, the people who are in need of this healing will always be the last to access it.