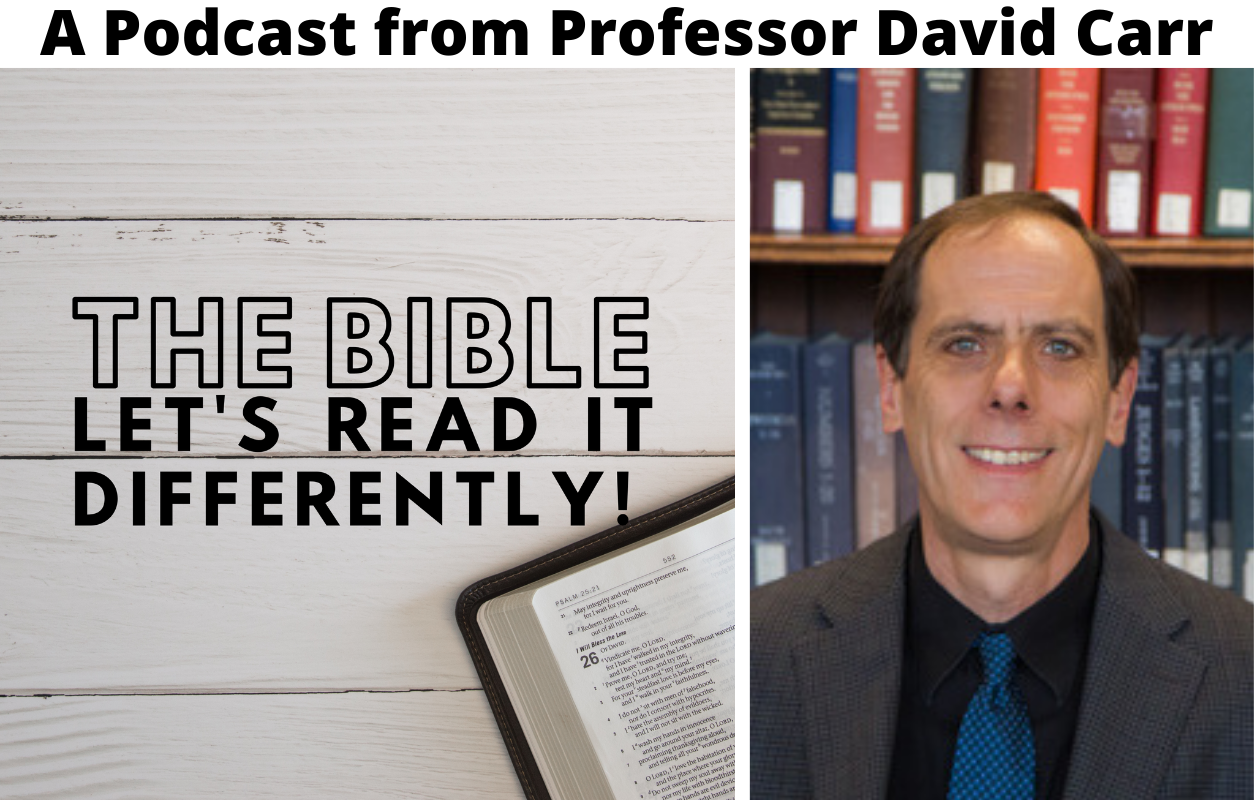 David Carr is a Professor of Hebrew Bible at Union Theological Seminary and his new podcast, The Bible, Let’s Read it Differently, features interviews with leading scholars advancing new methods for engaging the Bible academically.

Subscribe wherever you listen to podcasts or listen below.

Episode 1: Carol Newsom on the Bible and Dialogic Truth

In this episode, Carol Newsom, Professor of Old Testament at Emory University and former President of the Society of Biblical Literature explains how she came to the idea that the Bible’s truth is best perceived as ‘dialogical’. Its multiple viewpoints capture diverse sides of issues better than a single system would.

In this episode, Carol Newsom, Professor of Old Testament at Emory University and former President of the Society of Biblical Literature discuss feminist interpretation and biblical wisdom, with a focus on Proverbs 8.

The episode builds on Newsom’s classic 1989 article “Women and the Discourse of Patriarchal Wisdom: A Study of Proverbs 1–9,”  in Day (ed.), Gender and Difference in Ancient Israel. Fortress, 1989.

Professor Cheryl Anderson of Garrett-Evangelical Seminary and author of Ancient Laws and Contemporary Controversies: The Need for Inclusive Biblical Interpretation (Oxford, 2009) discusses how she rereads the Song of Songs in light of the HIV/AIDS crisis impacting communities of color.

The interview connects with her “Womanist Reading of the Song of Songs in the Age of AIDS,” in Brenner-Idan and Yee (eds.), The Five Scrolls (Bloomsbury, 2018), 89-102.

In this interview, Ken Stone of Chicago Theological Seminary and author of Practicing Safer Texts (2005) describes how he came to destabilize the heteronormative Biblical creation stories through using the theories of Monique Wittig and Judith Butler.

This episode connects with his “The Garden of Eden and the Heterosexual Contract,” in Bodily Citations, ed. Ellen T. Armour and Susan M. St. Ville (New York: Columbia University Press, 2006), 48-70.

Interview with Steed Davidson of McCormick Theological Seminary and author of Empire and Exile: Postcolonial Readings of the Book of Jeremiah (T&T Clark, 2011) and a book in preparation, Postcolonial Biblical Criticism: A Guide to the Perplexed. An expert on the topic, Davidson discusses different ways that postcolonial studies can be used in relation to the Bible and some important resources for further exploration of Postcolonial biblical criticism.

Episode 6: Cheryl Anderson on Intersectional Analysis and Divorce of Foreign Wives in Ezra

Professor Cheryl Anderson of Garrett-Evangelical Seminary and author of Ancient Laws and Contemporary Controversies: The Need for Inclusive Biblical Interpretation (Oxford, 2009) discusses intersectional analysis and analysis of the biblical text and its effects over time.

Quite different. This is a one-minute paradigm song to the tune of “If You’re Happy and You Know It” for those learning Hebrew. The ancients long knew that music was the way to memorize things. I could not find a paradigm song to do this for the Hebrew strong verb and prepositions. So this is my rough and ready solution (apologies for the scratchy voice).