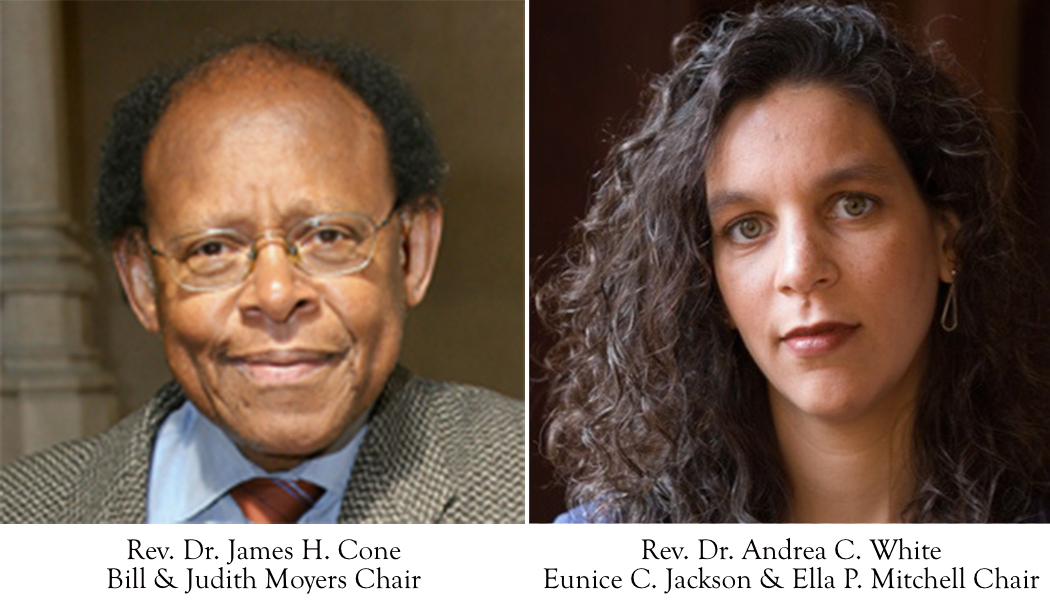 I am pleased to share two historic and joyous announcements as we approach the holidays.

The Union Board has voted to name Rev. Dr. James H. Cone as the inaugural professor holding the Bill and Judith Moyers Chair, recently established through a generous $3 million gift by Union Board member, Chang K. Park. Dr. Cone is a renowned scholar whose formidable and influential writing, teaching, and public presence honors the legacy of the public and prophetic witness of Judith and Bill Moyers.

“I consider Bill Moyers to be a prophetic voice of our generation, and I am very pleased to have his legacy perpetuated at Union. Judith Davidson Moyers, unseen by many, off camera while Bill was on, has been a critically important contributor behind his citizen-journalism, the creative spark for his truth-telling, and the business acumen that powered his prophetic voice,” said Chang Park

Through their pace-setting work in media, community advocacy, public health, and education, Bill and Judith Moyers have invigorated the moral commitments of people around the world. Between the two of them, Bill and Judith hold over 30 Emmys, a dozen Peabody Awards, and numerous honorary degrees. For over four decades, they have elevated the stories of people whose voices might otherwise have gone unheard, and posed questions of ultimate meaning in the public square. Longstanding friends of Union, they are tireless champions of journalistic integrity and creative leadership with a legacy of unwavering advocacy, all of which are core to the mission and vision of Union Theological Seminary.

Recognized as the father of black liberation theology, Dr. Cone has held the Charles A. Briggs Chair in Systematic Theology at the Seminary since 1977. Among his numerous awards are the American Black Achievement Award in Religion given by Ebony Magazine, the Fund for Theological Education Award for contributions to theological education and scholarship, the Martin E. Marty Award for the Public Understanding of Religion, and the Eliza Garrett Distinguished Service Award in recognition of seminal theological scholarship from the Garrett-Evangelical Theological Seminary.

Dr. Cone is the author of many acclaimed books, including: The Cross and the Lynching Tree, A Black Theology of Liberation, Martin & Malcolm & America: A Dream or a Nightmare, God of the Oppressed, The Spirituals and the Blues, For my People: Black Theology and the Black Church, and My Soul Looks Back.

The Union community will celebrate Dr. Cone’s investiture this spring.

When I arrived at Union in 2008, I was determined to honor Eunice Jackson and Ella Mitchell, the first two African American women to graduate from Union Theological Seminary. Those trailblazing Union alumnae’s work prepared the way for the founding of Womanist theology and ethics at Union. They stand within the important tradition of liberation theologians who have long been active here. With history as a starting point, I was equally eager to recognize this movement for the power that it has among contemporary African American women at Union and beyond and for the richness of that voice within theological education. At that time, I proposed the establishment of the Eunice C. Jackson – Ella P. Mitchell Chair to promote interdisciplinary explorations at the intersection of religion, race, gender, and women’s studies.

Eight years later, I can report two things: First, our efforts to date have secured nearly $500,000 from more than 300 generous donors, the most individual gifts given to single chair at Union, a testimony to its importance. We are deeply grateful for this steady show of support and for your kind gift as part of it. Second, I am pleased to tell you that in light of this successful outreach and wishing to see the chair funded, Union’s Board of Trustees at its October 2016 meeting voted to contribute the nearly $2.5 million needed to fund the Jackson-Mitchell Chair. The Jackson-Mitchell Chair is at long last funded!

With the fundraising goal now successfully met, Union’s leadership turned its attention to filling the chair with an outstanding scholar, one who embodies the ethical, socio-political, and ecclesial traditions so identified with Eunice Jackson and Ella Mitchell. After a consultation among President, Board, Dean, and Faculty, I am very pleased to tell you that we have chosen Womanist and Systematics theologian Rev. Dr. Andrea C. White, Associate Professor of Theology and Culture, who will assume the chair by 2018, after the publication of her two monographs Scandal of Flesh: Black Women’s Bodies and God Politics, and The Back of God: A Theology of Otherness in Karl Barth and Paul Ricoeur, as well as a third volume that she is editing: Feminist and Womanist Theologies (Fortress Press, Shapers of Modern Theology Book Series). We look forward to celebrating her future investiture.

Dr. White joined the faculty of Union Theological Seminary as the Associate Professor of Theology and Culture in fall 2015. Prior to her appointment, she served on the faculty at Emory University’s Candler School of Theology, Graduate Division of Religion, and Department of Women’s, Gender, and Sexuality Studies. She is also the Executive Director of the Society for the Study of Black Religion and sits on the editorial board for Teaching Theology and Religion: International Journal of the Wabash Center on Teaching and Learning.

The Rev. Dr. Ella Mitchell’s husband, Dr. Henry Mitchell, when informed about the funding of the chair and Dr. White, exclaimed, “It’s a dream come true!”

Both of these exciting announcements remind us again of the central and critical role of our beloved Seminary; and how Union’s inclusive, Christian-rooted, interfaith approach to education, and our deep commitment to advance social justice, is urgently needed in our pained and divided country, and indeed, our world.

Best wishes to you.

I invite you to email me at presoffice@uts.columbia.edu