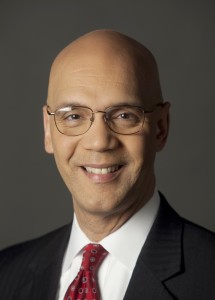 New York City, NY — After seventeen years at Nineteenth Street Baptist Church in Washington, D.C., Senior Pastor Derrick Harkins, former Director of Faith Outreach for the Democratic Party and advisor to President Obama, is leaving his flock and his city for a different kind of social justice ministry. In June, Harkins will become the Senior Vice President for Innovations in Public Programming at Union Theological Seminary in the City of New York.

“Union has a long tradition of advancing the cause of justice in the church, in the academy, and in the world,” said Harkins. “I’m looking forward to bringing together my pastoral, policy, and educational experience to the task of sharing the great work at Union with an even larger public audience. Union is an exceptional place, and I feel incredibly blessed by this opportunity.”

In this new position, Harkins will develop programming aimed primarily at those not enrolled in Union’s degree programs. This includes continuing and online education, public events, and the work of the institutes and initiatives housed at Union.

“As we look at the changing landscape of religion in America today, we have an incredible opportunity to reimagine seminary education,” said Rev. Dr. Serene Jones, president of Union. “We must invite a broader public audience into a conversation about the connections between faith, scholarship, and social justice. Derrick Harkins is the perfect person to take on that challenge, and he is the perfect fit for Union.”

Harkins has a deep familiarity with the seminary and New York City. He served on Union’s Board of Trustees from 2012 to 2015, earned a Master of Divinity from the school in 1987, and began his career at Abyssinian Baptist Church in Harlem where he was a seminarian intern before becoming Assistant Minister.

Harkins was also Vice President with the North American Baptist Fellowship of the Baptist World Alliance, and has been a guest lecturer on the church and social action at a number of colleges and universities including Bucknell, Cornell, Iona College, and Harvard’s Kennedy School of Government. He has appeared on CNN, MSNBC and NPR, and addressed over 250,000 people on the National Mall at the 2010 March for America Rally. An active voice in the debate for comprehensive immigration reform, he has worked closely with the Immigration Policy Center, and Esperanza for America to expand the combined immigration reform efforts of the African American and Hispanic communities. He has preached and been extensively engaged in relief and development work in Rwanda, Burkina Faso, and Jamaica. He serves as a member of the Board of Directors for World Relief, Faith in Public Life, and Sojourners.