During Fall Break, Cláudio Carvalhaes, Associate Professor of Worship, and Greg Snyder, Senior Director of Buddhist Studies traveled to Nagpur, India for The Social Engagement and Liberation conference, hosted by the International Network of Engaged Buddhists. Both Cláudio and Greg will be reflecting on their experience on the Union website. To read Greg’s second post, please click here. 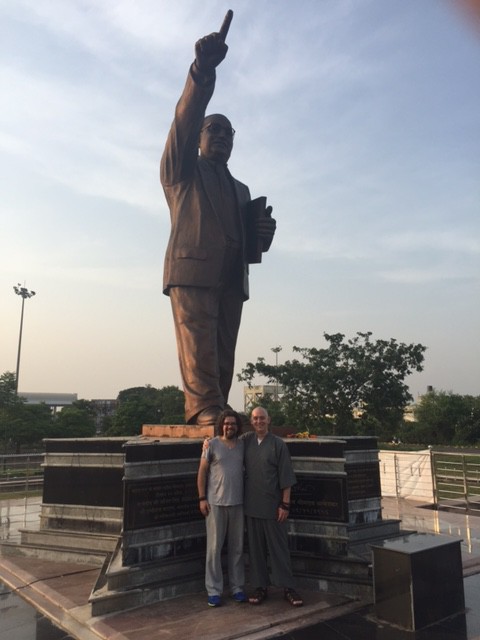 In between events we are sitting in a small room off the main path of Nagaloka in Nagpur, India, where thousands of pilgrims continually stream through the gate to pay respects to the Buddha and Dr. B. R. Ambedkar. Elders, children, entire families and communities of Dalit converts, many wearing the white of Buddhist lay practitioners, visit the 60-foot golden image of the walking Buddha, who Ambedkar wanted to be portrayed with eyes open stepping forward to end suffering in the world. From behind this towering, radiant image the Buddha’s robes lift swiftly in his wake, as if one is witnessing the first determined step of his certain mission. After making offerings at the feet of the Buddha, pilgrims excitedly make their way to the life-size, garlanded bronze statue of Ambedkar who is portrayed with a cane in his hand, to do the same.

Amid the week’s celebrations of the 60th anniversary of Dr. Ambedkar’s mass conversion here in Nagpur, we are taking part in a conference held by the International Network of Engaged Buddhists (INEB), entitled Social Engagement and Liberation. The conference is designed for engaged Buddhists from traditional and Western backgrounds to have space together to reflect on Babasaheb Ambedkar’s vision in relationship to the expression of Buddhism within their social experience and location. Themes include Dharma as empowerment, breaking down barriers between people and the implications of Dharma for governance and civil society.

We begin each day with sitting meditation alongside the students here. Nagaloka is a school devoted to educating college-aged Dalits in Ambedkarite engaged Buddhism. Clear numbers are difficult to ascertain, but Nagaloka leadership feel that close to 40 million Dalits have converted to Buddhism in India. This is considerably above government census, which they feel to be inaccurate. The growth of these communities far outstrips the capacity of the movement to train them in their new faith. After receiving an education here, Nagaloka students return to their communities to teach Buddhism and start social programs. From the conversations we have had so far, these young women and men seem to be a clear, devoted and determined lot with many ideas about how to lift up their communities. Sitting meditation in a Buddhist temple of Ambedkar, I could not help but smile, reading t-shirts with, “One’s life should be great, rather than long,” or “Because of him, we are.” or “Educate. Agitate. Organize.”

This morning after meditation we were honored to have been able to be a part of the conversion ceremonies of new Buddhists from Gujarat and the Chandrapur region of Maharastra. Participants took refuge in Buddha, dharma, and sangha vowed to follow the five Buddhist precepts and committed to the 22 vows added by Ambedkar to ensure Dalit Buddhists fully disengaged from Hinduism and took up the path of embodying the moral and social commitments of Buddhism. Ambedkar felt the very structure of Hinduism was one of “graded inequality” that would never allow Dalits to be free of oppression or recognized as fully human, and so the conversion ceremony includes the total renouncing of their former faith.

After leaving the temple, we made our way to an enormous tent built of freshly cut, wooden posts wrapped in cloth and bound at the joints with rope. Over the prior two days, we watched as the stage and tent were built, covered, electrified with lights and ceiling fans, and carpeted laid out. The work of the community to pull this all together has been stunning with people working from 5 a.m. to 10 p.m. every day. Under this tent, engaged Buddhists from all over the world gave their welcoming and introductory speeches, the most inspiring of which was the leader of the Gujarat Dalits, who told her story and celebrated that any true Buddhist liberation movement must include the deep practice of purifying the mind of greed, hatred, and prejudice. This was followed by the bellowing call that the oppressed must demand the same purified mind of their oppressors. Her call rose against the backdrop of pilgrims still streaming down the path and drew cheers from the students, monks, nuns and laity filling the tent, as well as those on blankets spread over every inch of shaded grass in nearby tree groves.

One feels a revolutionary energy that seems integral to the sense of Buddhist devotion here. Much of this is owed to the Ambedkar’s original language. He saw the two – revolutionary energy and devotion – as one movement of liberation. If it is not known to the reader already, it should be made clear that this position is certainly not the most common, conventional perspective in either traditional or Western Buddhism, one of the reasons why what is happening here is so inspiring. That said, in the United States social crises and the just, heart-driven voices of sangha members who are not the white, middle-class norm are pressuring Buddhist leaders to move toward a more engaged expression. For Buddhists, it may actually be Ambedkar’s time in America.

Here the devotion to him and the movement is strong and conveyed clearly in the spirited greeting of Ambedkarite Buddhists, “Jai Bhim” Bhim is the affectionate term for Ambedkar, whose first name was Bhimrao. Jai Bhim is “Victory to Bhim.” In the joy of that greeting, there is little question that in the hearts of Dalit Buddhists this is a social movement. This was even more pronounced later this evening when we attended the anniversary celebration of Dr. Ambedkar’s conversion celebrated at Nagpur’s Diksha Bhumi, the conversion ground where he stood to become a Buddhist in October 1956.

The memorial brought together more than a million Buddhists from Maharastra and other provinces of India. It was a joy to march with everyone on the way to the grounds as Nagaloka students formed a human chain around the international guests to ensure we were not separated off from the dense crowd. What was noticeable in the mix of all ages were the high numbers of young people everywhere shouting chants whose scores of calls always solicited the same response, “Jai Bhim.” It’s hard to miss the intergenerational strength and a sense of heart and identity being passed down to the children, several of whom boasted proudly of being born Buddhists. At times this deeply felt grounding in community reminded me of my time with the Zapatistas. It was inspiring.

Coming here, I am so pleased to find such vitality. Yesterday a fellow priest in my Zen lineage said something to the effect of, “Having all of these engaged Buddhists from around the world is great, but that’s not what’s really happening here.” I could not agree more. One aspect of what is happening here is that a people are unwaveringly demanding their dignity together. Having the honor to witness this, strengthens the heart. There is so much more that will take years to comprehend fully. I, for one, am looking forward to what the Dalit community here has to teach us all.