In February 2021, Union Theological Seminary, working with the leadership of the Eco-Justice Caucus, formally recognized the global climate crisis by declaring a climate emergency. This declaration initiated a process for the formulation of a 10-year Climate Mobilization Action Plan or CMAP. On Earth Day 2021, a group of students, administration, board members, faculty and alumni/ae launched a Community Assembly. This democratic process was created to outline policy recommendations for the institution. The launch of the Community Assembly included a public event with a panel of experts who explored how Union can better hear the Cry of the Earth.

Now that a full year has passed, the Community Assembly has created the first iteration of the CMAP and is working with the administration to have it implemented. We spoke to two members of the Eco-Justice Caucus – Ben Stegbauer and Suntina Spehar – to learn more about the process and the next steps for our community. 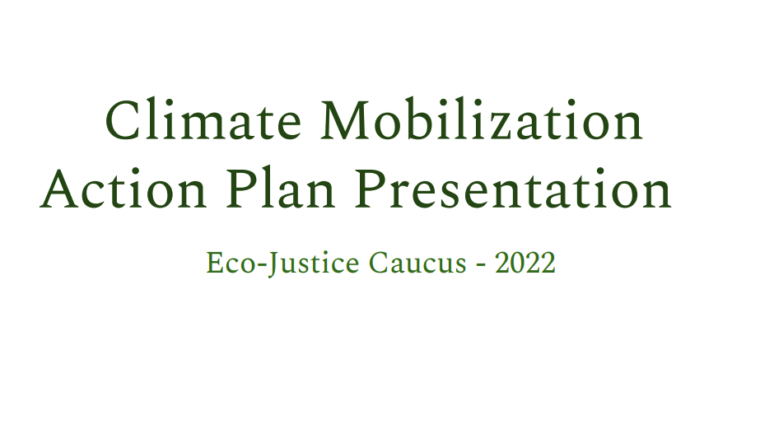 In speaking with Ben and Suntina, one thing was clear; the Community Assembly was vital to the success of the process. “We wanted to really embrace that method of direct democracy and pretty radical democracy,” shared Ben. “We want to make sure that students have a voice and create a place where students could say, ‘this is what it would look like to us, for Union Theological Seminary, to be a green seminary.”

Suntina added that it was “incredibly democratic and did very much take into account the feedback that students offered. I very much believe that it took into account every voice that was there in assembly.”

The CMAP is not simply a document about lowering carbon emissions. It is a vision for a greener seminary that encourages community and student flourishing. It envisions a future of greater adaptation to the changing environment and a place where Union can become an ecological stronghold and community hub. The plan is divided into three sections; Curriculum and Community, Facilities Sustainability, and Eco-Justice. (View the CMAP presentation here).

When asked about each pillar of the plan, Ben noted that “we had some big, quantifiable goals like going carbon zero by 2030. We also have outlined other goals like a curriculum audit. We want to audit where we are in the curriculum today. For example, are we still functioning within a lot of the dangerous and problematic Christian practices like the doctrine of discovery and other exploitative and colonizing theologies?”

Suntina, who worked more closely on the Eco-Justice section, shared, “the most important part of the Eco-Justice section is that this has to ensure that vulnerable and marginalized community members are not negatively affected by things like displacement or increased workload. Being situated where we are in Manhattan, right next to Harlem, it is really important that we’re situationally aware of the place and the effects of our actions on the communities surrounding us.”

It was important for this plan to be sustainable for years to come. “A big part of the CMAP itself is actually doing regular audits so that we can be more aware of where we’re at as a seminary,” shared Ben. “In terms of where we can make updates to facilities or where things are being wasted, which ultimately can save money for the seminary.”

This was a community-wide effort in hybrid spaces over the virtual academic year of 2020 – 21, and when we were back on campus for the 2021 – 22 academic year. Unfortunately, this created some hardship as students shared the same levels of Zoom fatigue experienced all over the country.

“It was so gracious for the student enthusiasm that we had. And from a couple of alums too! And especially expert enthusiasm as well,” said Ben. “It was quite impressive and really heartwarming to see how many people wanted to help, and many people were genuinely interested in wanting to push for a lot of these changes.”

“That’s really what pushed all of it towards the document that ended up being completed and refined. I will definitely give a thumbs up to everyone involved in how resilient each person was,” added Suntina.

Ben reflected, “being online last year, even in pretty atomized boxes on the screen, it was harder to see this vision. So, I think this year, being on campus and seeing how people and this community move through its own spaces and spaces in the greater neighborhood allowed me to rethink and reflect back on the ways in which the CMAP itself was a vision.”

This CMAP vision could not have been realized without the Community Assembly, and buy-in from all stakeholders on campus. This Spring, Ben, Suntina, and members of the Eco-Justice Caucus presented the CMAP to our administration’s leadership teams and to Union’s Board of Trustees. The CMAP and its recommendations are currently being added to Union’s Strategic Plan. All of this progress could not have been realized without the full community working collaboratively together toward a common goal.

Suntina shared, “one thing for me, just to reiterate, is complete support for this process that we provided each other. There was a really tight-knit group of people who were incredibly passionate about what we were doing. There was a really awesome community and a nice community buttress for each and every student. I mean, I can speak for myself on this, but I felt like it was an incredibly supportive environment.”

Ben sees the process that was used in this project as an opportunity for students to impact change in other areas of the Seminary. “I am really excited about just having the Community Assembly process as a tool for students to have their voice heard, in a much more democratic way. Especially with students leaving so quickly. Two or three years isn’t that long of a time. I am excited and interested to see how that process can be utilized as a tool for students in all areas of and every corner of the school and building.”

View the Eco-Justice Caucus Presentation on the CMPA here.