Earlier this summer, six Union faculty members traveled to China to visit Nanjing Union Theological Seminary and learn about China’s growing Christian population. The trip offered an opportunity for Union to strengthen our ecumenical ties and to forge new, mutually beneficial relationships. The delegation’s warm reception is a product of China’s rapidly shifting religious demography, but also reveals a significant evolution in the relationship between China and the West.

When the Union delegation arrived in China, they were overwhelmed by the unparalleled hospitality. Everywhere they traveled, remarked Rev. Dr. Claudio Carvalhaes, Union’s faculty ambassadors were greeted with “enormous banquets.” Indeed, “any meal was easily three hours,” he laughed, adding, “When I was completely full, they said ‘now the main course is coming.’” Dr. Su Yon Pak was similarly overwhelmed, noting how at one Buddhist temple, they “were treated to over twenty-four dishes. The taste and the beauty of these dishes were truly a feast!” The delegation’s experience at the Chan Buddhist provided a fruitful opportunity to learn about Chinese interreligious engagement.” Sensei Greg Snyder says he feels that “Union students would benefit greatly from…exposure to the way China has historically cultivated a multi-religious environment.” Particularly, he says, as we strive to create a more harmonious environment of religious pluralism in the United states, “it behooves us to remember and explore other traditions that have long been comfortable with practicing many paths of devotion.”

The group’s Chinese hosts were eager for the opportunity to engage, theologically, with the delegation. At Nanjing, Dr. Kahl was invited to give a lecture. Her lecture was entitled, “Paul among believers and non-believers: A conversation with Paul and Bishop Ting at Nanjing Union Theological Seminary.” Dr. Pak reports, “we had so many formal and informal conversations.” In addition to academic discussion, the delegation also had opportunities to sing hymn with their hosts at China East Seminary. “We had an impromptu hymn-sing,” says Dr. Pak, “singing simultaneously in English and Chinese…it was an amazing experience.” 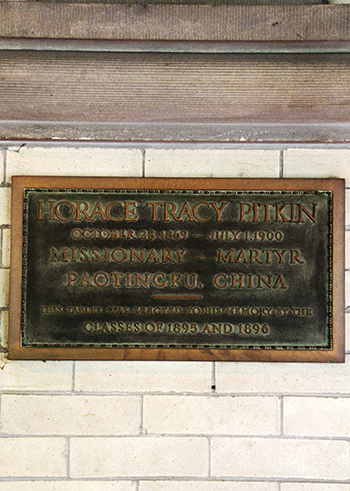 This enthusiastic welcome poses a stark contrast to the historically rocky relationship between China and the US vis-à-vis religion—the vestiges of which are memorialized in the actual corridors of Union. Take a stroll in the corridor between the facilities office and the Social Hall and you’ll discover an easily overlooked plaque dedicated to Horace Tracy Pitkin that stands as testament to a radically different period in Sino-American relations. Pitkin was a Union student who, in 1896, traveled to China as a missionary. Four years later, during the Boxer Rebellion, revolutionary forces stormed his mission outpost and Pitkin was beheaded. It’s hard to believe that these two episodes are separated only by a century. The dramatic change tells a powerful story about the ways in which Western religious leaders are grappling with, and attempting to overcome, an oftentimes-imperialist legacy.

The Boxer Rebellion that took Pitkin’s life was, in many ways, a direct reaction to British and American colonialist attitudes. While general xenophobia played a role, it’s impossible to separate the violent uprising from its larger context: The insurrection occurred in the wake of the Opium Wars, whose subsequent lopsided treaties forcibly opened China’s markets to Western traders. This period also coincided with an explosion in missionary activity. In 1860, there were only 60 foreign missionaries in China. By 1900, that number had ballooned to 2,500.[1] For many Chinese, missionaries’ actions were irrevocably tied to the exploitative actions of Western imperial powers. When the Boxers rebelled, foreign missionaries became a symbol of Western imperialism. “They’re still struggling with the legacy of missionaries,” said Dr. Pak, “that certainly came through.”

It’s perhaps unsurprising, then, that the person most responsible for creating a vibrant Christian community in China was not a foreign missionary, but rather the Chinese Bishop K.H. Ting. Ting was educated at Union, graduating in 1951 with a Master in Theology. He then returned home where he served as an enthusiastic Christian evangelist. Ting was remarkably successful in this endeavor, to the point that Dr. Pak reports he is widely seen as “the father of modern Christianity in China.” To that end, Ting founded both Nanjing Union Theological Seminary and the Christian China Council to train Chinese ministers to serve the country’s growing Christian population, which now numbers ~40 million.

This sizeable population of Chinese Christians, indeed the fastest growing Chinese religious group, offers a tremendous opportunity to forge a new, dynamic partnership between Union Theological Seminary in New York and its counterpart in Nanjing. Rev. Dr. Serene Jones, President of Union, notes that “Nanjing Union and the Chinese Christian Council of Churches has been very clear with us about the need for further training so that China itself can develop, internally, better resources,” adding that, right now, in most of the country’s regional Bible colleges, many professors lack any kind of formal theological education. Hopefully, in coming years, Chinese religious leaders may attend Union to reap the fruits of a world-class theological education, and then bring those gifts back to their home context. 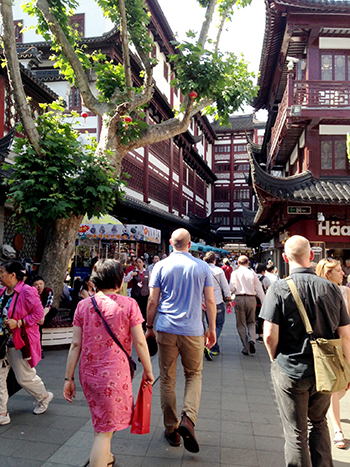 The framing of this partnership differs greatly, however, from historic Sino-American religious interactions because it is truly bidirectional. While 19th and 20th century Chinese missionaries mainly focused on how they could help the Chinese people, Union intends to create a modern, postcolonial relationship that views Nanjing Union as true partners.  President Jones, for her part, is clear in her belief that US students have much to learn from their Chinese analogues. “China represents the strongest and fastest growing global market…we can’t help but benefit from understanding it politically, socially, culturally, and theologically,” she said, “By sending students and faculty to China, we can deepen our appreciation and understanding of this very ancient and significant culture.”

This attitude of mutual respect and understanding is a marked departure from our nation’s historically colonialist mindset. “In the United States, we tend to see ourselves as ‘the world,’” says Professor Carvalhaes, observing how often we act as if “everything that matters is here, and everything else is an appendix, or it only has value in relation to something we call ours. Unless we gain a much more complex notion of how the world lives…our discourse will always be self-enclosed, which is very dangerous.”

“One of the best ways to fight against American imperialism,” noted Caravalhaes, “is to understand its foreign effects.” A prospective coalition with Nanjing Union grants the “immense gift of being challenged, of being transformed.” Perhaps, through sustained relationship, we can begin to heal some of the damage that colonialism has wrought.

To these ends, the prospective partnership with Nanjing Union is just one part of Union Theological Seminary’s larger plan to expand our global ecumenical relationships. “The China trip is part of a broader initiative that Union began three years ago called the International Connections Initiative,” explains Rev. Jones, the purpose of which was “to reconnect with seminaries in other countries where we have historic ties.” The first two trips occurred in 2016, when faculty traveled to Cuba and India. Next year, Union hopes to send similar delegations to Brazil and West Africa. With luck, these trips will foster new, exciting relationships that will spiritually nourish both the Union community and the communities with which we partner. 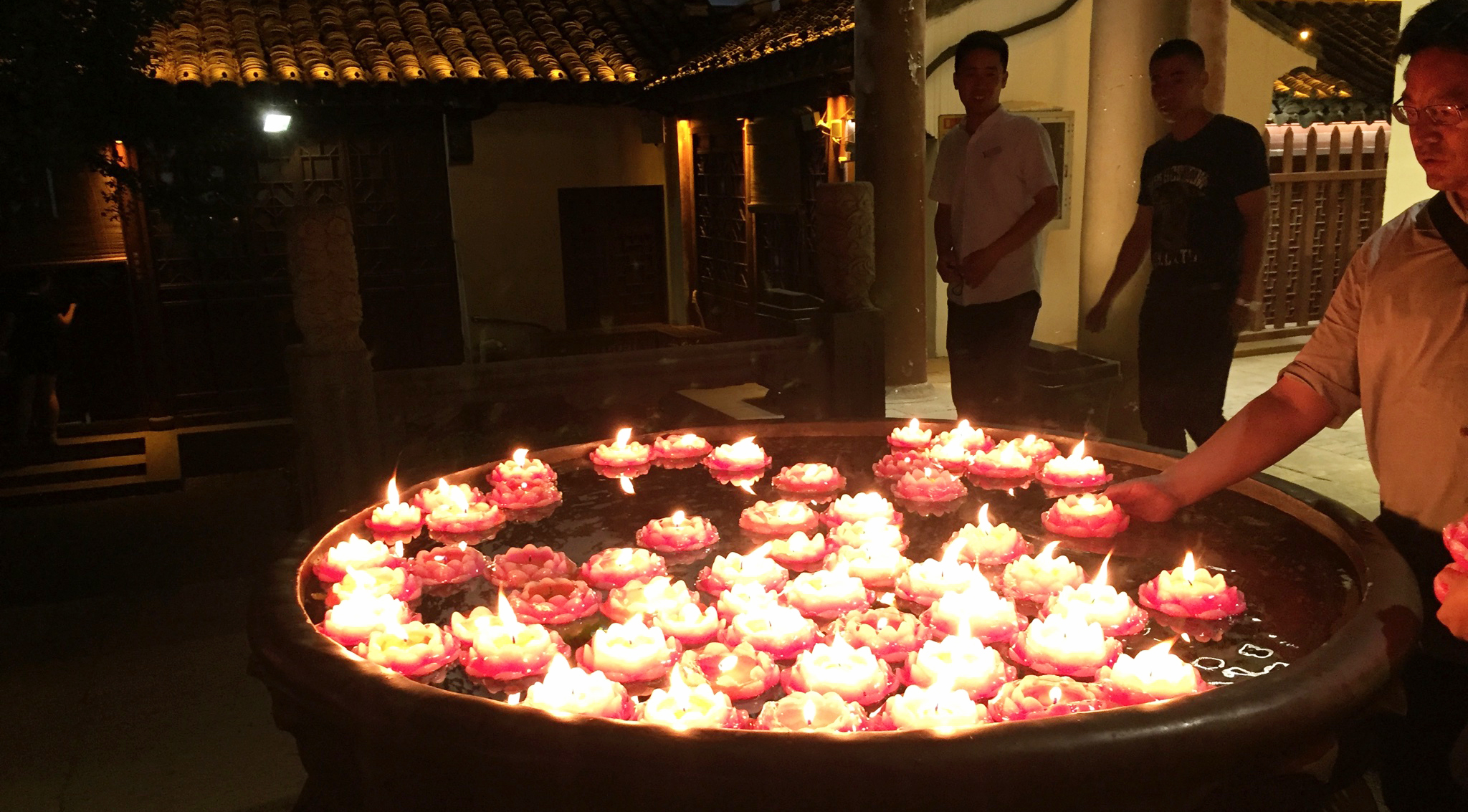 In the end, it is this cultural exchange that may yield the greatest impact. “We not only got to know each other, but we got to know each other’s stories,” observes Dr. Pak. Dr. Carvalhaes agrees that open dialogue between equals has the potential to radically transform both transcultural relations and Union’s own theological instruction. “You hear the story, you hear the struggle,” he concludes, noting “You cannot stay the same after meeting someone else.”