George Floyd. Breonna Taylor. Ahmaud Arbery. In the summer of 2020 we collectively mourned the deaths of Floyd, Taylor, Arbery, and the countless other African Americans killed at the hands of police or racist profilers. The protests began in Minneapolis and quickly spread across the country and the world. It felt as if our nation was on the verge of a reckoning. Union has had a long history of fighting against racial injustice, and just as they have done in years past, Union students, alums, and staff took to the streets to denounce this pandemic of violence against Black people. This is a collection of a few of their reflections on this pivotal moment and movement. 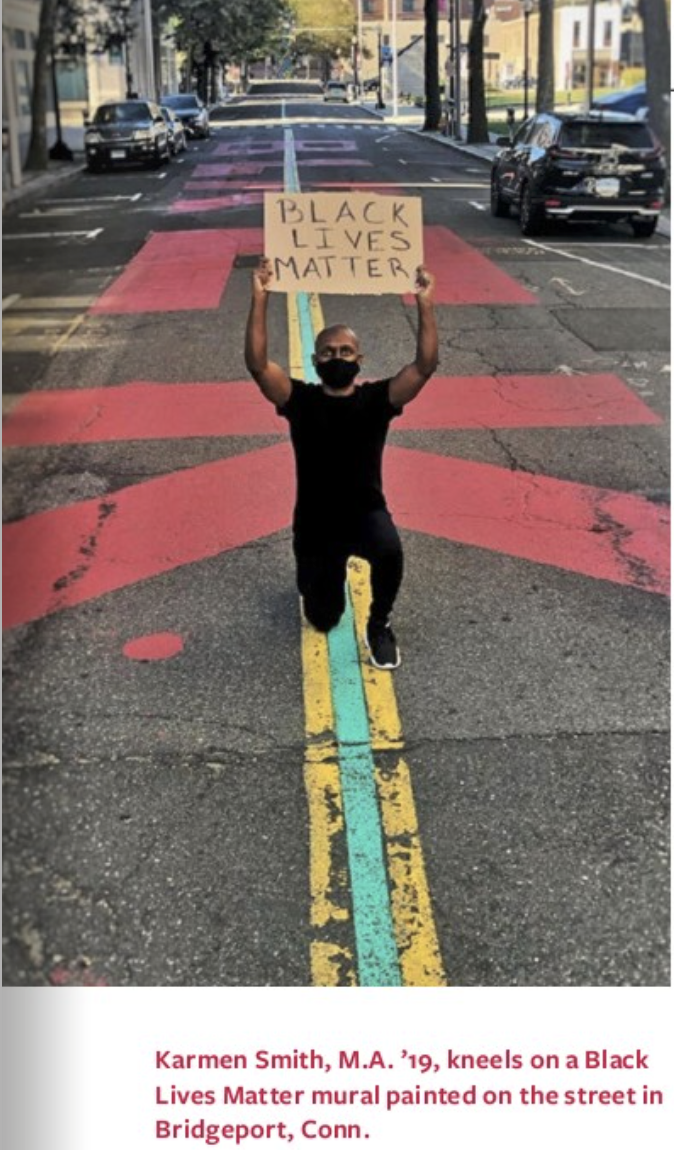 I, like many, awoke to the spectacle of George Floyd’s murder, and I was stunned. I could not participate in the very real life that was happening outside of my front door. I could not address the online faith community for which I am responsible, in a responsible manner. I was sad, enraged and in disbelief at the same time. And as I watched the protests erupt and spread like a summer wildfire across the nation, my heart sank. It reminded me of when Baldwin urged America to listen because “every brother” wasn’t looking to reason like “Malcolm and myself.” I wrestled with how I could best serve. As I watched, I could see the mental and physical toll it was taking on the protesters. So my partner, a therapist, and I began hosting “Well-Cared Wednesdays” online. We hosted conversations on how to deal with stress and emotions. We offered mediations and prayer services and partnered with a physical trainer to provide free fitness classes. We made an intentional decision to support the community while they were on the move. We wanted to make sure that those on the front lines remained physically and mentally fit for the fight. And we’re still serving. 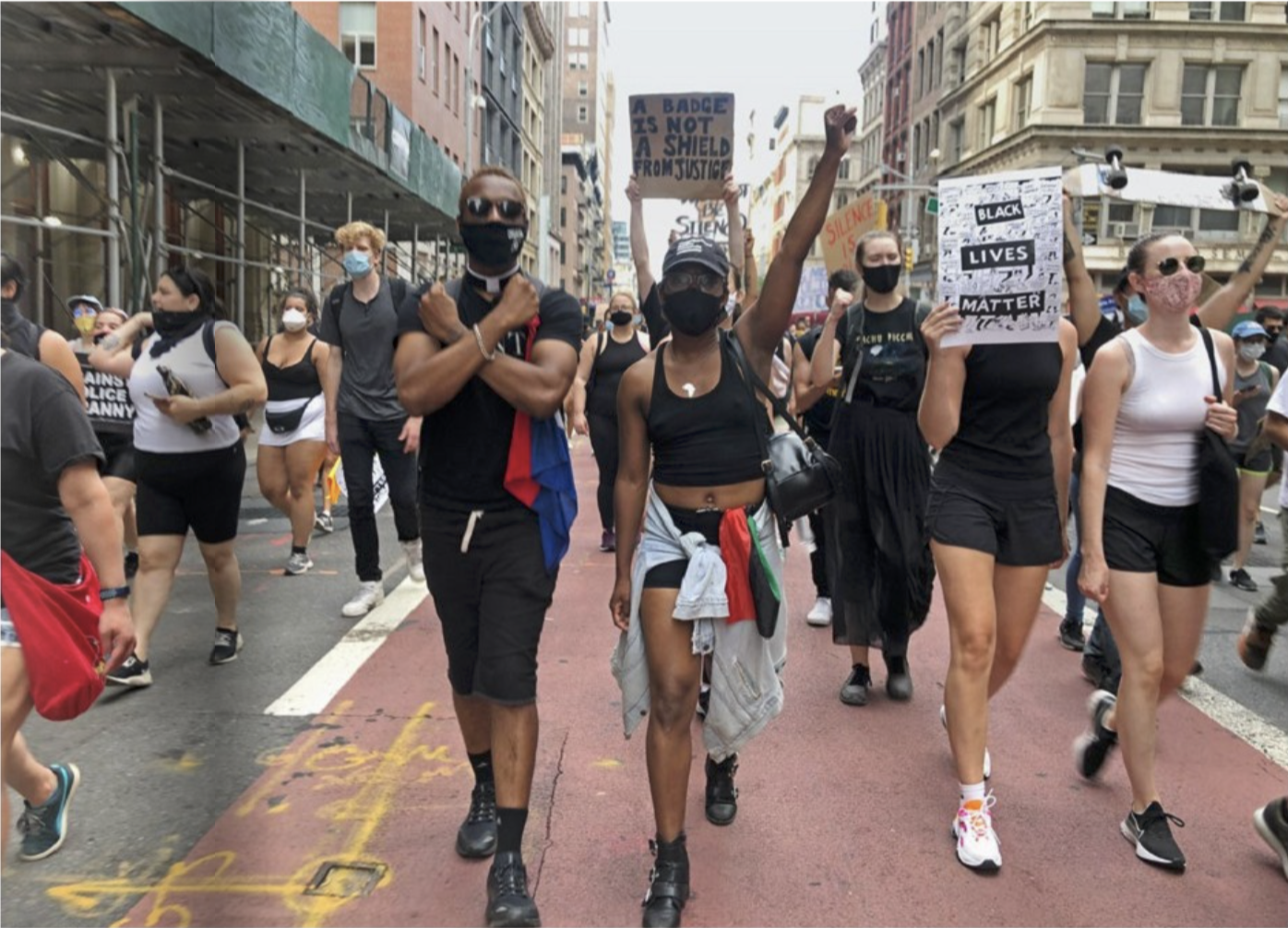 I felt a sense of light as I marched with over 15,000 people for Black Trans lives in Brooklyn on June 14. The love present during this moment was overpowering and the spirit of God was indeed present. As I consider love, I am reminded that this is the most important principle of my Christian faith. When we think of the sacrifice Jesus made, we must note that those who cultivated the imperialistic society during his time made an active choice to hang him publicly. Black people during slavery were too hung and killed publicly. The death of George Floyd was not only a modern lynching — it was public. My faith calls for me to identify Christ with the “recrucified” Black bodies of Breonna Taylor, Riah

Milton, Dominique Fells, Atatiana Jefferson and the countless names to precede and follow (Cone, 2011). My faith calls for me to understand that police brutality is one chip of the prison industrial complex iceberg. My faith calls for me to take the positionality of leading with love. Leading with love means to be a warrior for Black lives — for all Black lives. It means to act. To act means to not be silent. For Black people, acting is nuanced. For a Black mother, it could mean to resist the demand for her Black body to be strong for the rest of humanity and to tangibly take back the spaces that were stolen from her in order to care for herself and her child.
Therefore, as a Black Christian who seeks answers, to lead with love by joining hands, protesting, and fighting for the liberation of my people, I too, can identify my own Black body with the crucifixion of Jesus. I can identify not only with the attempt of society to publicly strike against me as they did Jesus — I can also identify with the ancestral power that lives within me, guiding me to prevail against those who are waging a war to erase my Black body. As Jesus did.

—Kianna Ruff, M.Div. ’19
(excerpt from an essay published by Interfaith Youth Core—shortened due to space limitations) 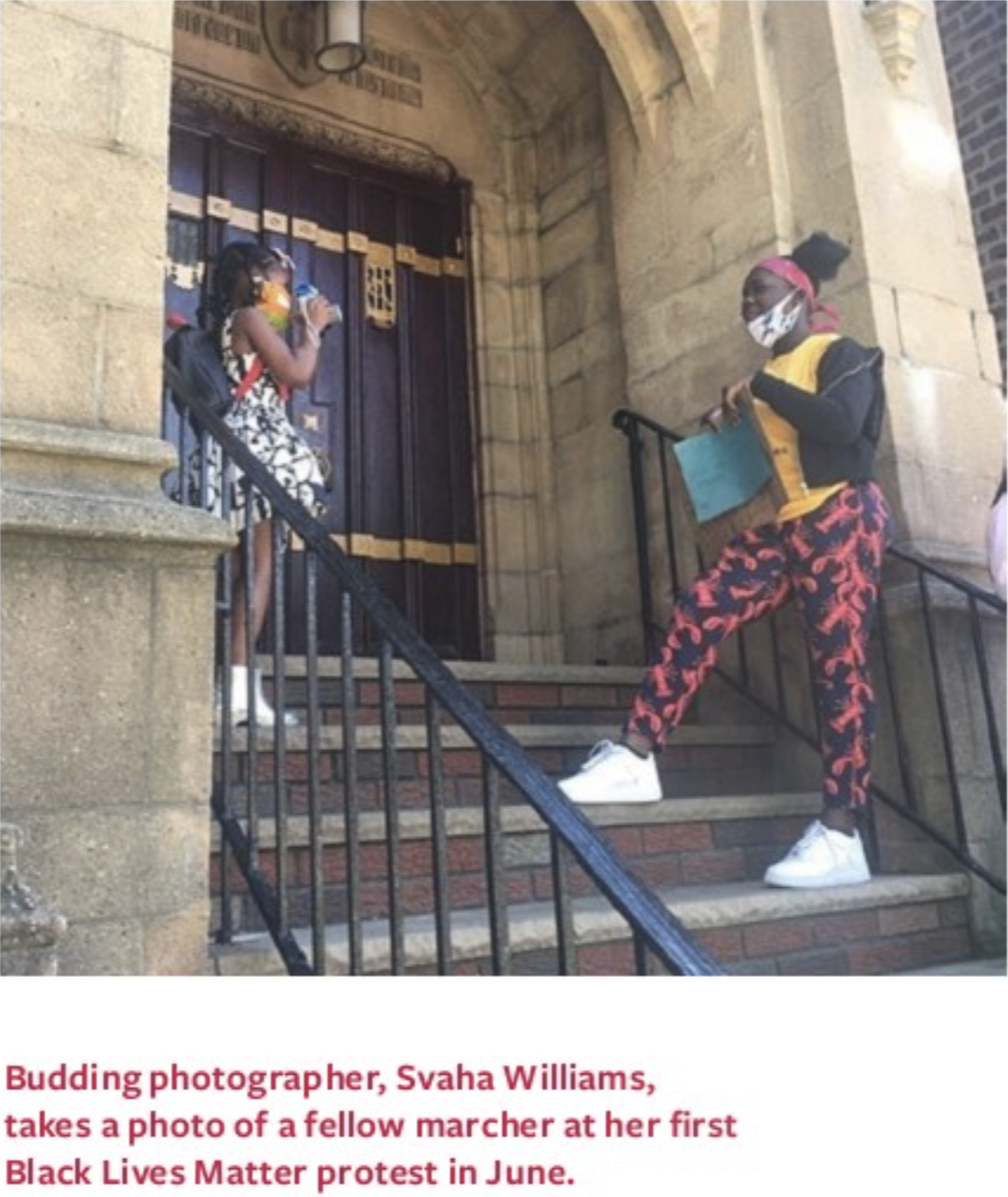 …scribbled all over my syllabus for Dr. James Cone’s Introduction to Systematic Theology during my first semester at Union. The symbolism in that sentimental moment carried her and I both through the Union fire, across the commencement stage three years later. She turned her newly gained literacy skills to learning about systematic injustice in the news, and after reading a headline about George Floyd’s murder asked to stand in solidarity with her church choir. No parent is ever prepared for the gut-wrenching pain of explaining a news headline about a life taken, without remorse or regard, but I am thankful I belong to a community that continues to exemplify what it means to act justly and love mercy.
— Tanika Williams, M.Div. ’19

Too many white police officers are killing defenseless black people and not going to jail for their crimes. Black Lives Matter protests are trying to get people together to stop these police crimes. The protests teach people what’s going on to help them understand that we need to save black people from being killed by white police. Not all white police are bad. The protests want to inspire people around the world to demand that the American government punish the white police officers who commit these crimes. The protests help save our world by inspiring the fight for black lives all over. An activist is someone who fights for others. I am an activist who fights for the rights of black people and the earth. I believe that social media can connect people. I use social media to put my work out there using videos and photos. On June 7, I went to my first Black Lives Matter protest with my choir group at Saint Paul’s United Methodist Church. It felt great being with my friends and protesting for justice. I felt awesome after the protest and was inspired to do more to help the Black Lives Matter movement.
— Svaha Williams, age 6

In the midst of the coronavirus, 300-plus protestors rose up for those impacted by the pandemic, violence and conflict around the world. Union alums Pastor Tabatha Holley of the Bronx’s New Day Church and Nyya Toussaint were the ones who encouraged me to be a part of this vibrant and Spirit-filled prayer vigil led by an incredible collective of Bronx faith leaders. There were several Union alums and current students who came to participate in the vigil. The Sikh. The Indigenous Communities. The Buddhist. The Hindu. The Jew. The Humanist. The Christian. The Muslim. Many faiths attended this one vigil. Amazing. After the vigil, we were socially distancing as we decided to provide justice and jail support for protestors. Through our masks, we decided to advocate for gun control. Without pause, I walk on for my friends that have succumbed to COVID-19. I work on for George Floyd, Breonna Taylor and so many others whose lives were cut short by senseless violence. As Union alumna the late Reverend Dr. Katie Cannon would say, I will continue “doing the work my soul must have.” #blacklivesmatter 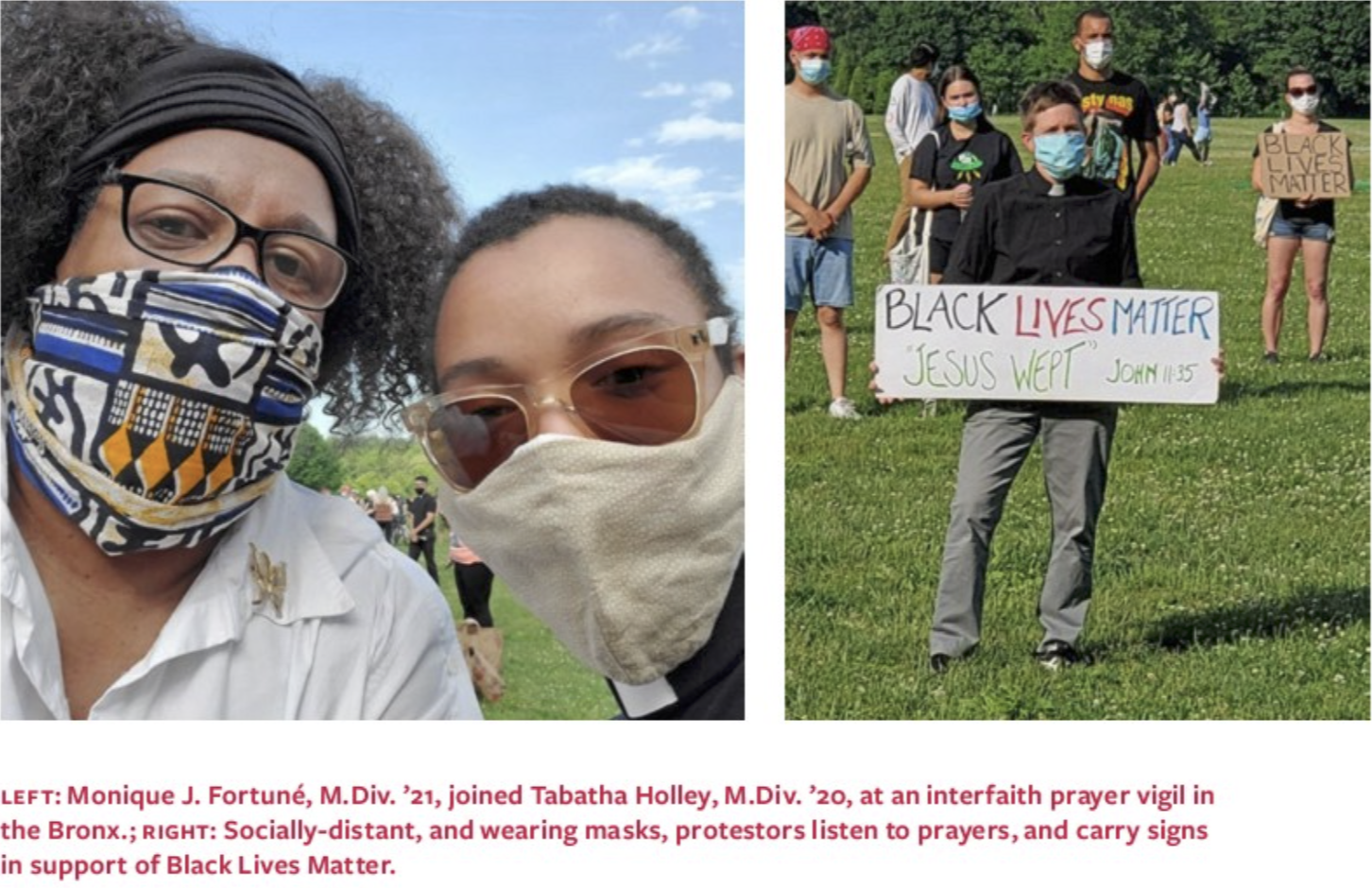