Katilau Mbindyo MDiv ’19 graduates this spring and will go on to study African Traditional Religion under the mentorship of Dr. Jacob Olupona at Harvard University’s African and African American Studies Program.

Could you tell me about the journey that led you to choose this program?

I came to Union in search of a way to liberate myself from Christianity because I couldn’t reconcile the atrocities of colonialism with the Gospel of Jesus, though I know other people can. I realized during my time here that I was just interested in learning more about my ancestral traditions. I was introduced through Dr. James Cone’s liberation theology to a bunch of African theologians, including John Mbiti, an Akamba theologian, and from there I learned about the field of African Traditional Religion. It was through working with Dr. Aliou Niang that I found the two tenured professors in the United States who take students in African Traditional Religion and I wanted to learn from people who have been doing this work for a long time.

Tell me about your work here at Union and how you’ll be continuing it at Harvard.

I took the interdisciplinary track at Union and designed a concentration in African Spirituality and Ecological Theology. I put together my own curriculum, which honored Black religion, eco-ethic, and eco-thought. After the passing of Dr. Cone, I found myself kind of lost here and realized that I had to piece together a Union that would feed my academic endeavors. I got involved with the Center for Earth Ethics, where I was able to work with Geraldine Ann Patrick Encina and Mindahi Crescencio Bastida Muñoz to learn more about indigenous wisdom. I took Dr. Niang’s Bible & Nature class and then a class he taught this semester on African Traditional Religion. I also took Dr. Samuel Cruz’s classes on Pentecostalism, which helped me ask questions about the indigenous traditions that we practice today but don’t call indigenous traditions, and I took African Religions in the Americas with him, another eye-opening course where I was able to write papers about my family back home. Meeting Dr. Larry Rasmussen last year was also eye-opening to me. (Dr. Rasmussen is the is Reinhold Niebuhr Professor of Social Ethics emeritus at Union Theological Seminary and co-author of Earth Community, Earth Ethics and Earth Habitat: Eco-Injustice and the Church’s Response.)

How do you see God or the divine in your work?

I feel that my ancestors called me to this work. I’m still not sure why I was the person in my family chosen to do this because I’m not at all an academic. Every morning before I go to class, I just pray that my ancestors will be with me in class. So whenever I’m writing or saying anything smart, it’s my ancestors speaking. I see God in my work because my people are at the center of the work that I do. 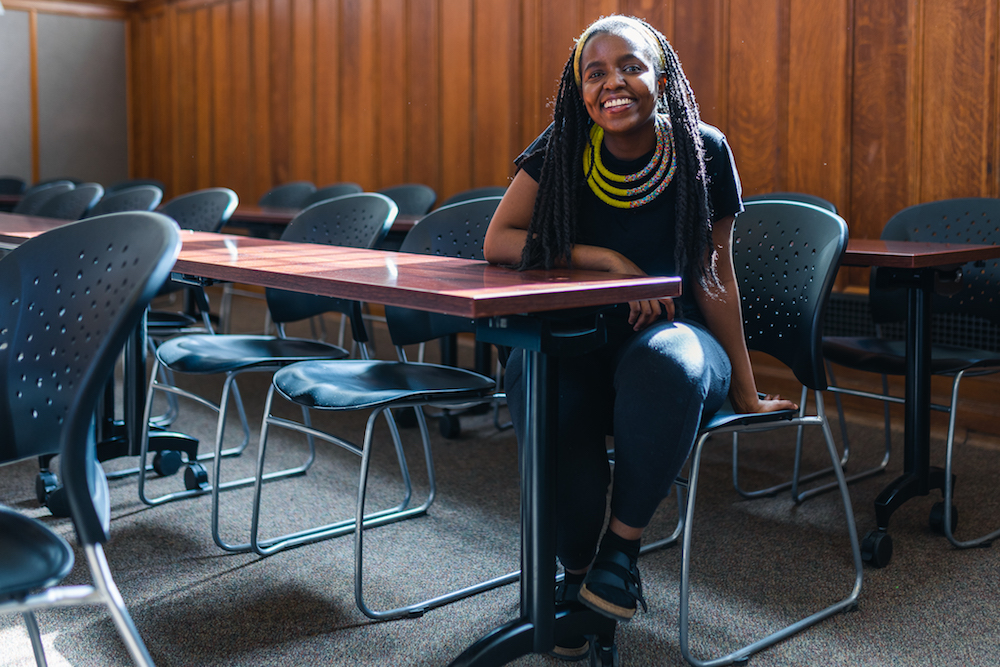 What work do you hope to do after you finish your PhD program?

I’ve met with a few heads of indigenous universities. One is run by a family whose matriarch went to school with Wangari Maathai and Ngugi wa Thiong’o, important trailblazers in the Kenyan intellectual and political worlds. The African Brotherhood Church, the indigenous Christian church of the Akamba people, has its own university, too. As I spoke to the leaders of these institutions, it seemed that they’re really interested in establishing centers and departments for African traditional religion, wisdom, and philosophy. I’m really afraid of things being over-Christianized and over-Westernized, so I wanted to be trained to have an epistemology which centers Africa. I realize the irony of doing that in the West, but I’ve found that I have a freedom here that allows me to be really audacious in the questions that I ask. It’s about being bold enough to ask those questions, and I think that the work of critical race theorists in the U.S. has emboldened me to keep asking those questions and think the way I do. In the future, I’m really interested in helping to develop academic programs at universities in Kenya.

I think Union was really important in my journey because I knew from the moment I got into Union that it would be the place where I would be free to think the way that I wanted to think. I would be encouraged to be really messy in my journey to figuring out questions rather than answers. I’m really glad I was able to come here because in the end, I think I was able to do what I came here to do.