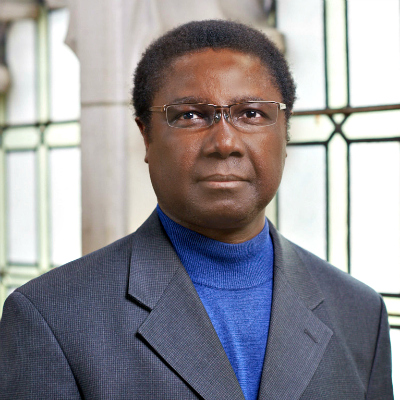 Professor Aliou Cissé Niang earned his B.A. in Religious Studies with a minor in history (Cum Laude) at Williams Baptist College in 1994 in Walnut Ridge, Arkansas.  He received a M.A. Th.  (Graduate Dean’s Award of Excellency) at Logsdon School of Theology (HSU) in 1997 in Abilene, TX, and  a Ph.D.  in Biblical Interpretation–New Testament (with Distinction) at Brite Divinity School (TCU) in Fort Worth, TX in  2007.  While at Brite Divinity School, he served as Graduate Assistant and Lecturer in New Testament Survey classes  and co-taught a course on Postcolonial Biblical Interpretation with Dr. Leo G. Perdue.  He was also instructor at the Department of Religion at TCU where he taught Understanding Religion: The Bible from 2002-2003 and was a guest lecturer on the “African and the African Diaspora: History, Religion, and Culture” (RELI – 20503) (Honors).  He was engaged in inter-religious dialogue on “Christian Perspectives on the Jesus of the Gospels” with Dr. Yushau Sodiq (Professor at the Department of Religion–TCU) at the Moslem academy in  Arlington, TX. Before joining Union in August 2011, he served as assistant and associate professor of New Testament at Memphis Theological Seminary in Memphis, TN, where he was named The Rev. Dr. James L. Netters Associate Professor of New Testament (2008) and received The Paul R. Brown Distinguished Teaching Award in 2010.  While in Memphis, he served as Biblical Theologian in Residence at the First Baptist Church of Memphis, TN, and spoke at many churches and the Church Health Center providing workshops on Understanding the Bible and seminars on various biblical topics.  He continues to speak in local churches and lectures in both academic and ecumenical settings.

He is a member of the Commission on Baptist-Muslim Relations of the Baptist World Alliance and a member of the Editorial Board of the International Voices in Biblical Studies (IVBS)–Society of Biblical Literature (SBL) Peer-reviewed series.

Professor Niang’s first book (Faith and Freedom in Galatia and Senegal: The Apostle Paul, Colonists and Sending Gods, Brill, 2009) compares the colonial objectification of his people by French colonists to the Graeco-Roman Colonial objectifications of the ancient Celts/Gauls/Galatians, and explores Paul’s role  in bringing about a different protrayal.  He is working on his third book on Illness and Health.  His teaching and research explore themes and issues in Biblical and Postcolonial Theologies.  Niang believes it takes a village to create a leader and turns his classroom into a microvillage–a learning community where brothers, sisters, and non-binary friends learn to appreciate their diverse and yet unified experiences of God.  His teaching pedagogy reflects his exercise of the wisdom of his West African Diola elders as he seeks to create and foster a learning environment where students would freely yet responsibly engage in the ongoing critical quest for healthy ways to shape the social and spiritual dimensions of their journeys of faith.  He is passionate about translating academic work to the Church.

SPRING 2021, SPRING 2022
A condensed introduction to the complex historical, literary and theological worlds of the New Testament. Core texts of the gospels, Acts, Paul and Revelation are examined within their Roman imperial, Hellenistic and Jewish colonial contexts - and with an eye to past and current interpretational struggles at the intersection of gender, race, class and religion. Can we learn how to read "with new eyes?"

FALL 2021
Students read Paul’s First Epistle to the Corinthians to unearth the making of his theology and praxis under Imperial Rome. We critically engage the epistle’s most pressing issues such as the scandal/foolishness of the cross and human wisdom, gender and sexuality, food/knowledge and love, rights and freedom, gifts, power, resurrection, and body with a view to interpreting 1 Corinthians for our time. The question of whether Paul was creating an alternative community is central to this course.

NT 256
The Parables of Jesus
More

FALL 2021
Students read the parables of Jesus in their Roman Palestinian agrarian context in conversation with modern pre- and postcolonial agrarian contexts (e.g., West African). Questions for exploration include imperially enforced agricultural practices, the effects on subsistence-based economies, modes of land fertilization, the resulting ecojustice concerns informed by faith traditions, and the implications for experiencing and exercising God’s reign.

NT 327E
The Gospel of John and the Margins
More

SPRING 2021
Students read the Gospel of John by examining themes such as competing truth claims, light and darkness, identity and sacred space, echoes of anti-Judaism, clash of empires and their founders, inclusion and exclusion in a Graeco- Roman context. This course explores texts and images of the divine that might have generated debates within the Johannine community, focusing on ways of reading John to inform our contemporary communication of his message and its implications for interfaith conversations.