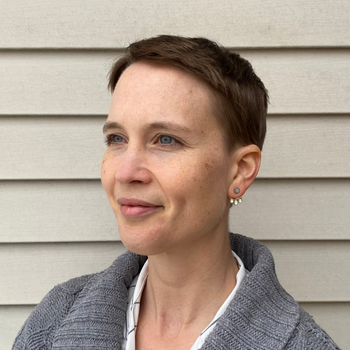 Julia Kelto Lillis is the Assistant Professor of Early Church History at Union Theological Seminary.  Her primary research interests concern ancient constructions of social difference, especially in areas we today call gender and sexuality, and the ways they are discussed in early Christian literature.  She teaches courses and topics in early church history, ancient theologians and saints, premodern genders and sexualities, early Christian biblical interpretation and non-canonical writings, and ancient perspectives on the body, healing, and disabilities.

Dr. Kelto Lillis’s first monograph, Virgin Territory: Configuring Female Virginity in Early Christianity (University of California Press, 2022), explores the variety of definitions that early Christians and their neighbors formed for virginity as they discussed its value.  Her earlier article “Paradox in Partu: Verifying Virginity in the Protevangelium of James” (Journal of Early Christian Studies, 2016) was awarded the American Society of Church History’s Jane Dempsey Douglass prize as an outstanding contribution to the historical study of women in Christianity.  Other research areas include the history of New Testament canon formation, gender fluidity in antiquity, and the unexpected ways that ancient Christian authors utilize and reflect on gender as they lift up saints for imitation or preach faith-grounded ethics to their communities.  Dr. Kelto Lillis has served on the executive board of the academic working group ReMeDHe (pronounced “remedy”:  Religion, Medicine, Disability, Health, and Healing in late antiquity), and her work on virginity, gender fluidity, and concepts of purity and pollution draws from a strong interest in ancient medical reasoning as well as ancient social and theological reasoning.

Dr. Kelto Lillis has taught in numerous faith communities and in academic institutions of all sizes.  She received the Dean’s Award for Excellence in Teaching during her doctoral studies at Duke University and Duke Divinity School.  Prior to joining the Union faculty, she taught in the Department of Religious Studies at the University of Virginia and the Department of Religion at Luther College.  She is passionate about making ancient texts and contexts accessible to present-day audiences, and she sees thinkers of past periods as stimulating conversation partners for present-day concerns with identity, health, social justice, and religious and theological boundaries and intersections.  At home and in church, she invests in the rich opportunities of ecumenical connection within a two-denomination family and by serving as a church musician.

FALL 2020, FALL 2021
An introductory survey of early Christian life and thought, from the proliferation of diverse forms of Christianity in the second century to the parting of the Greek and Latin churches in the eleventh century. Issues include the development of Christian faith and practice in changing political circumstances (persecuted minority or powerful majority); Christian expansion and interreligious relationships, within and beyond the Roman Empire; major theological writers and controversies; the interplay of Christian faith with the social dynamics of slavery, gender, sexuality, and ethnicity.

FALL 2020, FALL 2021
This course explores the significance of Mary of Nazareth, the mother of Jesus, in the first millennium of Christianity. Early Christians assigned Mary various roles and qualities that expressed their theological concepts, their hopes as believers, their social and political interests, and the challenges of living in a multi-religious world. We examine ancient, Byzantine, and medieval sources, including gospels and biographies, theological treatises, sermons, hymns, prayers, and works of art. This investigation helps students understand the changing character of Christianity in its first several centuries and how a monotheistic faith creates room for a human being to become the “Mother of God” and “Queen of Heaven.”

SPRING 2021, SPRING 2022
Early Christian texts offer familiar and unfamiliar patterns, norms, and possibilities for the aspects of human life that people today call gender and sexuality. This course examines the pertinent categories and social and theological logic of Christians in distant cultures by exploring a variety of ancient sources, taking into account challenging issues raised by feminist and LGBTQ+ historians. Questions include: Was gender permanent or fluid? What kinds of sexual relationships did Christians consider acceptable, and why? How did the rise of clerical and ascetic roles bend boundaries and create new possibilities? What are the risks and benefits of using current categories to study premodern sources, and how might premodern sources provide fresh perspective or new inspiration for reasoning about gender and sexuality today?